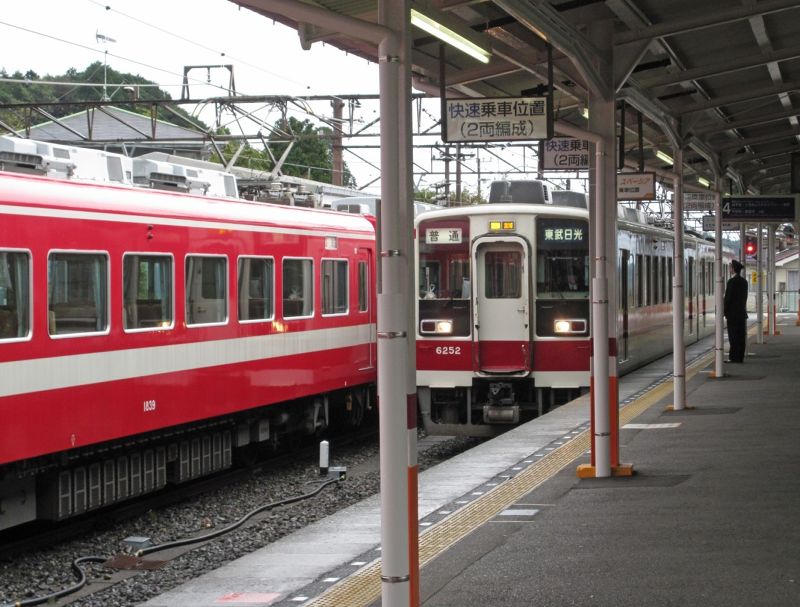 We were up quite early to enjoy another simple breakfast at the Turtle Inn Annexe. We then finished packing our small bags (having left most of our luggage in storage at the Ibis Hotel in Shinjuku) and our hostess kindly called a taxi for our drive to the Tobu Nikko Station.

We got to the station early so had plenty of time to shop for the obligatory bento boxes for the journey. Then I started to think about a missed opportunity from the previous day. As I mentioned, I was quite taken with several of the items we saw for sale in various shops in Nikko, as the quality of the workmanship here seemed high, but we already had several souvenirs by this point (a secret box from Hakone, a sake dish from Kyoto, our lovely wood-block painting from Takayama so I was persuaded yesterday not to buy anything else. One item though had stuck with me, and it was my turn to do the persuading, convincing Chris that it would be light and easy to carry and was easily worth the price asked.

So I left him guarding our luggage and walked up the main street to one of the shops we had visited the previous afternoon. 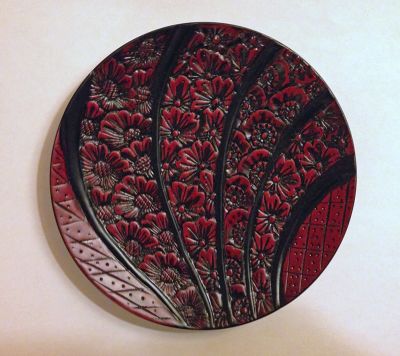 My souvenir of Nikko

In a small shop on Nikko's main street a local woodcarver makes and sells his beautiful work - small bowls, hand mirrors, boxes and larger items, all carved with intricate flowers and stained red with a dye made from cashew nuts. This style of carving, known as Nikkobori, is typical of the Nikko region, employing a unique v-shaped gouge known as a hikkake (meaning ‘scratcher’). This was originally developed during the restoration of Toshogu Shrine, as the triangular shape of the end made it the ideal tool for scraping off the difficult to remove varnish. Later, at the end of the Edo period, this tool began to be used in carving, using it to gouge out the design by pulling towards the carver. You can see being used in this YouTube video I found. Another characteristic of Nikko carving is the use of plant life as the main theme, influenced by the carvings at Toshogu - tree peony, chrysanthemum, Japanese apricot and cherry trees are all common.

I had fallen for one of the shallow bowls, which cost me 4,000¥. Each one is unique so that isn't a bad price at all, and the items are all so light and easy to carry (and of course, as this is Japan, beautifully wrapped on purchase) that they make great souvenirs of your trip or gifts for someone back home. This one was very definitely a souvenir for me (it still sits on a table in our front room). I only wished, however, that I had taken my camera when I went back to buy it (I’d left my heavy bag with Chris, taking only my purse), as I would have loved to have captured a picture of the artist at work and of some at least of the many other beautiful items he has created.

Returning to the station in good time for the train I rejoined Chris for the ride back to Tokyo. As on the outward journey we travelled via Shimo Imaichi to Shinjuku. There we headed for the Ibis to check in and retrieve the luggage we had stored. 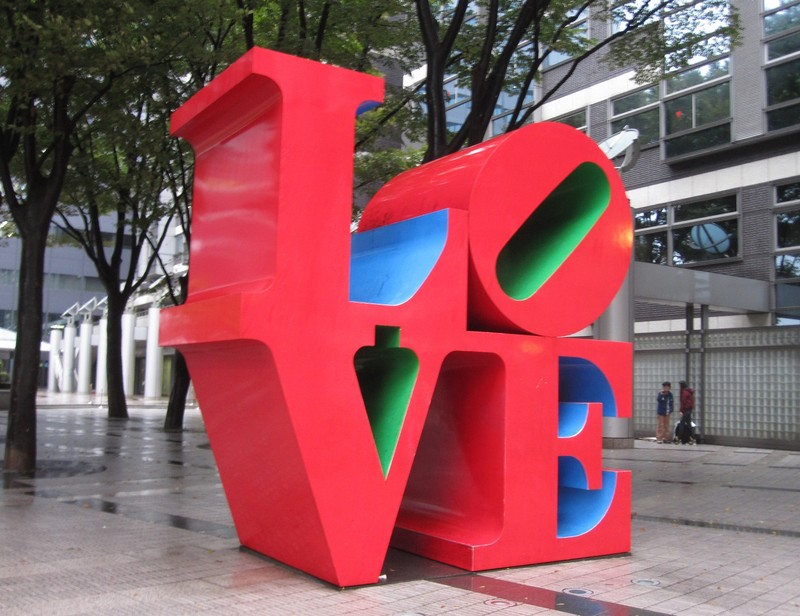 The bad weather that had been forecast had arrived, with driving rain and strong winds. but we were determined not to waste the last afternoon of our trip to Japan. So we grabbed our umbrellas and ventured out of the hotel to see more of Shinjuku. The area to the west of its massive station (the busiest in the world!) consists mainly of skyscrapers, some of them very distinctive in design – I loved the so-called Cocoon Tower! But in the pouring rain it was hard to get decent photos. 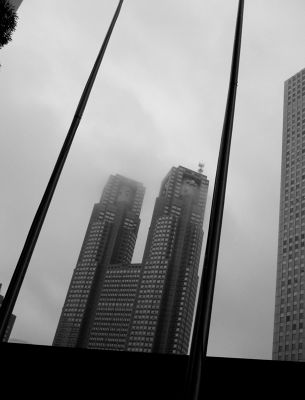 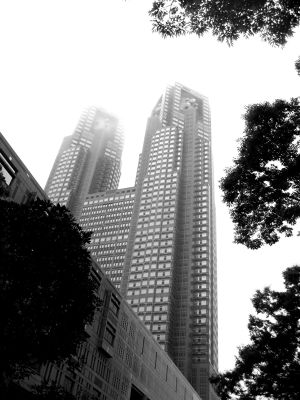 At the western edge of Shinjuku’s skyscraper district is this, its tallest. Indeed, when it was built in 1991 it was the tallest in the city, an honour it held until 2006 when it was overtaken by the Midtown Tower. It was designed by architect Kenzo Tange and intended to resemble a computer chip (no, I can’t see it myself!), while the twin towers are said also to echo the design of a Gothic cathedral. It is 48 stories high with three further levels below ground, and splits into its two towers at the 33rd storey height. Both towers have an observatory on their 45th floor which is open to the public and free of charge.

On a good day you can see Mount Fuji from here; on a bad day you can’t see much further than the next skyscraper. Unfortunately this was a very bad day! Of course we knew how bad the weather was before ascending and had no illusions that we might get much of a view, but it was free and promised time in the warm and dry, so we headed up. I had reckoned on poor visibility but, rather stupidly, had not considered that the glass windows would also be streaming with rain, which made it even worse. So – no great photos even of the surrounding streets, but it was fun to be so high for a while and peer down at the traffic (light as it was a Sunday), although frustrating to be told by informative plaques at every window about the great sights we weren’t seeing! 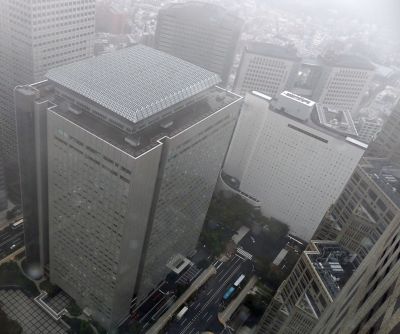 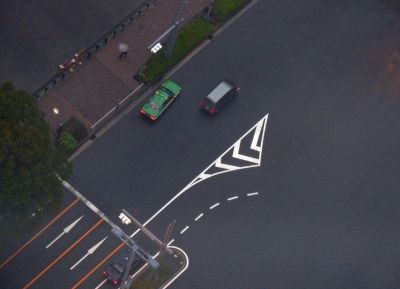 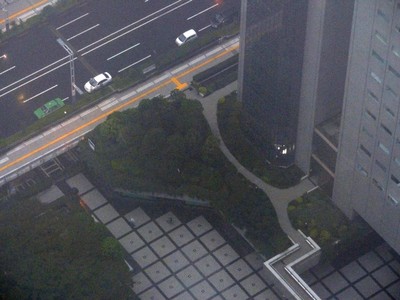 Looking down from the Tokyo Metropolitan Government Building

As well as checking out the architecture in this part of the city, we visited the small but interesting Sompo Japan Museum of Art which as well as showcasing the work of Japanese Cubist-influenced artist Seiji Togo, has several notable Impressionist works including Van Gogh’s Sunflowers (bought at the height of the 1980s bubble economy by the insurance company which owns the building for a then unprecedented five billion yen) and others by Gauguin and Cezanne. It’s not a large collection by any means, but a visit here is worthwhile if you are interested in art of this period, and especially in poor weather. 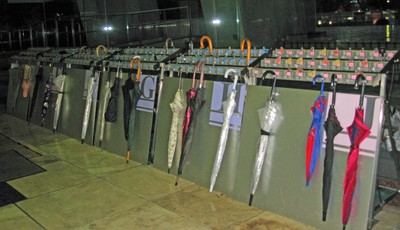 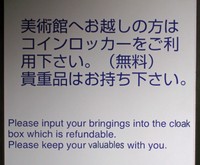 Umbrella lockers at the Sompo Japan Museum of Art

On our way back to the hotel my umbrella finally gave up its fight with the wind (we learned the next day that we were on the edge of a typhoon). But there was a trusty Lawsons nearby, the chain we had come to love when staying in Hakone, and they had the ubiquitous Japanese style of large transparent umbrella for sale, which coped much better with these conditions than my flimsy telescopic one brought from home.

Our last evening in Japan 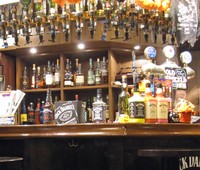 We decided that given the weather we would eat in the hotel restaurant that evening (an OK pasta dish, salad and garlic bread) but the rained eased a bit later so we went back to the nearby pub we had spent an enjoyable hour or so in a few evenings previously, the 82 Ale House. It was a Sunday evening and the place was as busy as before but luckily not totally packed, and again we were welcomed and shown to a table.

I had developed a taste for Japanese whisky so sampled two of the four on the menu, deciding that the Yoichi was my preferred one. Chris again had local beer (Kirin) and we had a lovely last evening in Japan in this cosy spot. 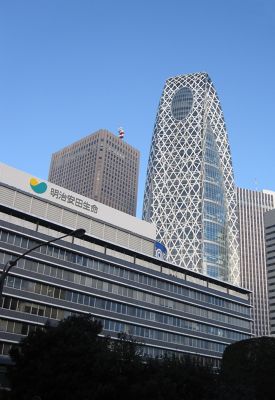 Of course the next day was fine and bright, just as we had to leave! To return to Narita Airport for our flight home we travelled not on the subway but using the so-called Friendly Airport Limousine service, which was more convenient leaving from Shinjuku. I say ‘so-called’ not because it isn't friendly but because it isn't really a limousine but merely a bus. However, it is a good and useful service nevertheless - and probably far far cheaper than any limousine would be!

We had pre-booked the bus we wanted a couple of days beforehand, on arriving back in Tokyo from Nikko. It's always best to do this to be sure of a seat, although as it happened when we arrived at the stop early we were able to get on the bus before the one we'd booked.

The buses run very frequently throughout the day and the journey is advertised as taking 90 minutes although we did it in about 75 (and that in the morning rush hour). We were dropped off right in front of the main entrance to departures, so it couldn't have been more convenient. And as a bonus, we got some great views of Tokyo on the first part of the ride as the route follows an elevated stretch of road that loops around some of the high-rise business districts. I was glad I had my camera at the ready to capture a few last shots of this amazing country. 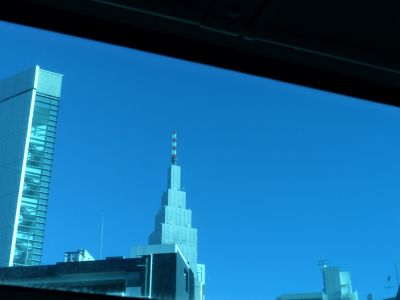 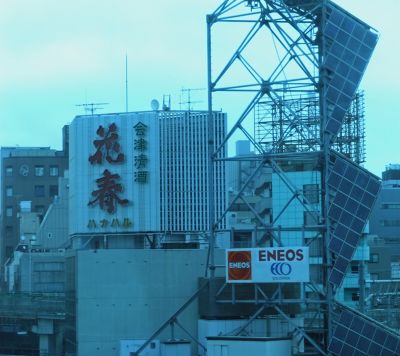 Seen from the bus to the airport