Into the Thar Desert 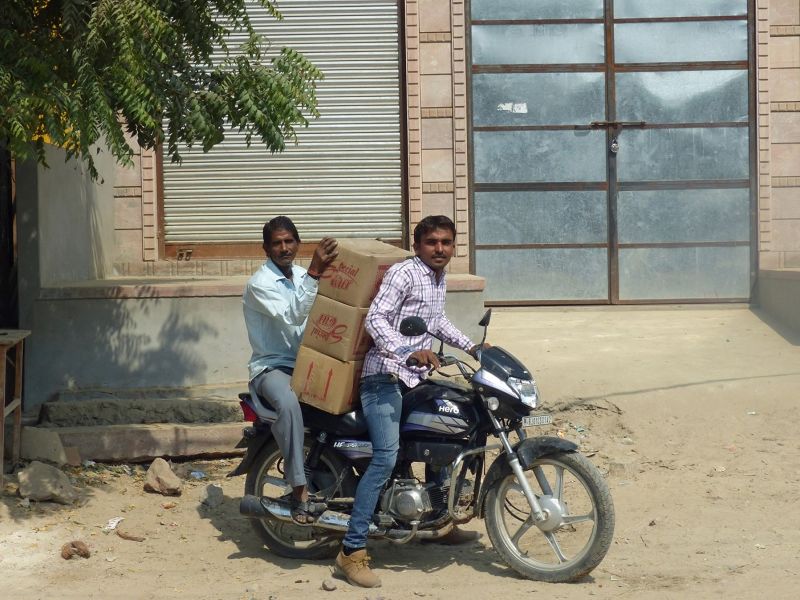 Leaving Jaipur we headed west, deep into Rajasthan. Now we were truly in the desert state. The first part of the journey was on a good multi-lane toll road, less interesting for us than the rural roads. After a while though we left this and took a fairly rough road that wound through small villages and into the Thar Desert. In places there was construction work that meant we had to leave the road altogether, at times driving directly over the desert sand! As we passed through the villages some locals would wave to us, and in one these two guys spotted my camera and indicated I should take their photo - so I did!

The most notable sight on the journey was our first Indian antelope, a Nilgai, which Mehar spotted, stopping for us to take photos from the car, but other than that we didn't stop until we reached Khimsar – a journey time of about six hours, although it would have been less without the road works. As always we had enjoyed watching life beside the road, but this was among the less interesting of the several drives we had in India. 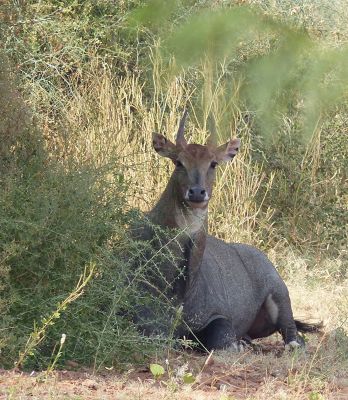 Around a 450 year old fort on the edge of the Thar Desert a small town has grown up, consisting of little more than a market, some shops and a bus station. These serve the surrounding rural community and those who work in the fort, which is today is both home to the Thakurs, former rulers of the Kingdom of Khimsar, who built it, and also a heritage hotel. Confusingly the town is also sometimes referred to as Khinvsar or Khinwsar, but the fort always (as far as I can ascertain) as Khimsar. 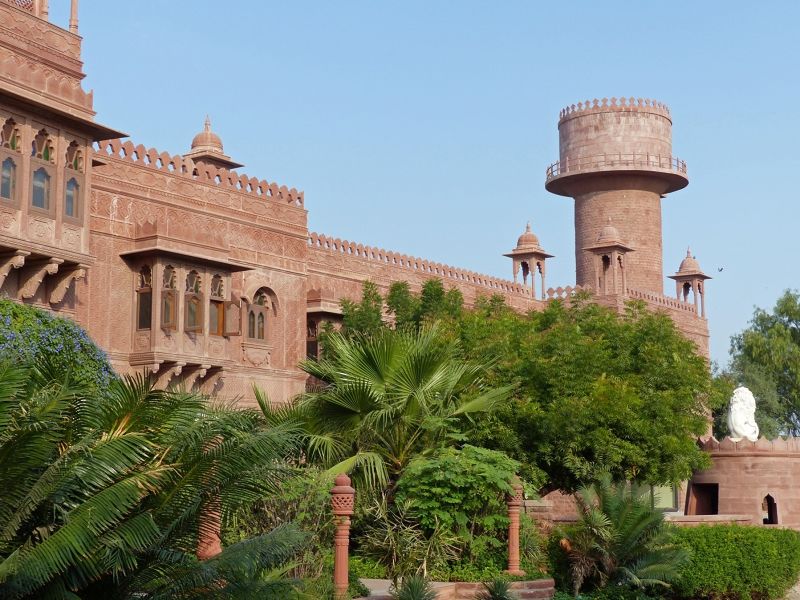 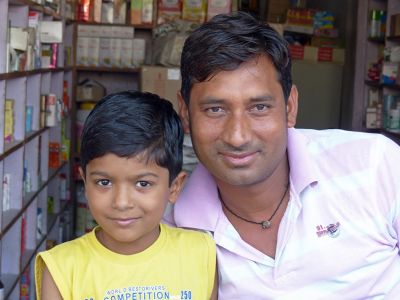 We spent one night here as a break on the long drive between Jaipur and Jaisalmer. There are no sights as such in Khimsar, unless you consider the magnificent fort, but as we wanted to see something of ordinary daily life in the region this suited us perfectly.

Arriving quite late in the afternoon we decided to resist the temptation of the rather lovely swimming pool in favour of a stroll around the village with our cameras. We found that most people were friendly and didn't mind those cameras in the slightest – indeed, many asked us to take their photo. This shopkeeper and his son were among these, and he gave us his address so we could send the pictures (which we have since done). A couple of women did shake their heads, no, so we respected this of course. 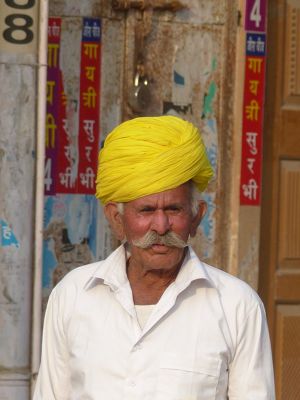 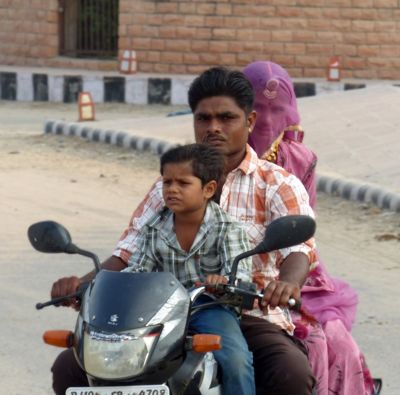 The main street is lined with small shops and is also a bus terminal, so there is plenty of activity. Cows and goats wander freely, men gossip or play cards in the shade, women pick through vegetables to select the best for the evening meal. Several small boys, and not so small ones, posed on motorbikes or scooters - one teenage lad rushing from a shop to do so as we passed. The bus sounded its horn multiple times to signal departure, but there was always one more person to squeeze in first. 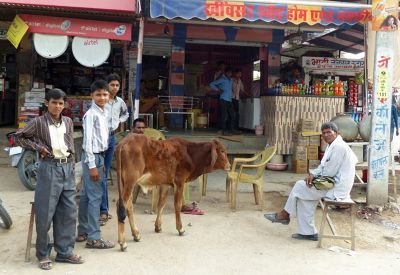 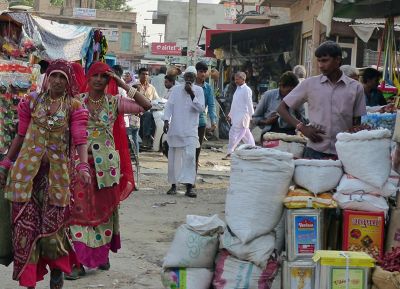 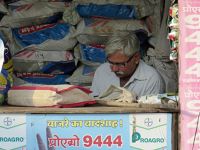 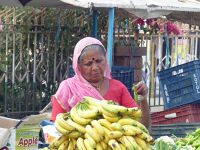 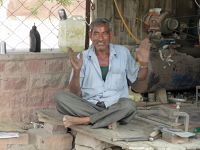 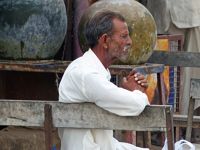 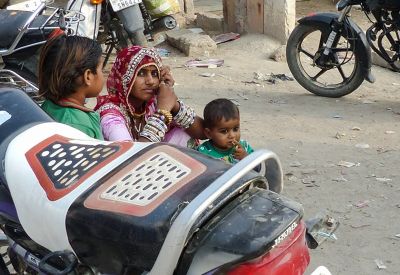 More of the locals

Near the entrance to the fort is a small temple and a couple of statues. One of these, near the fort, is I think of a former Maharaja. But as I said, a walk here isn't about finding the historical sights but those of daily life as it unfolds here in this Thar Desert village. 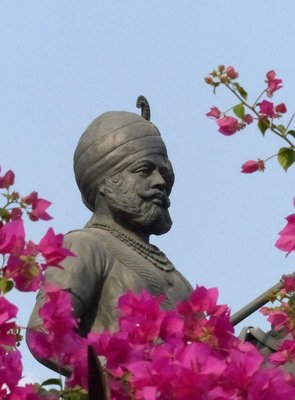 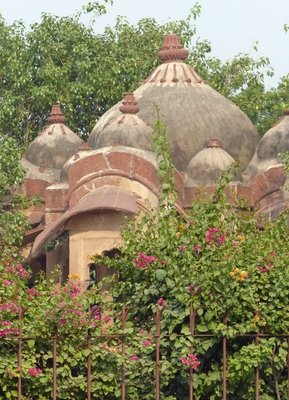 We spent the night in this rather stunning heritage hotel, the first of a number that we stayed in on this trip and although not my favourite (that honour goes to Narlai), it was probably the grandest and certainly the largest. Quite apart from the photo opps to be had on its doorstep when wandering around the town, the hotel itself provides plenty – beautiful flowers, lovely old architecture and views of the surrounding countryside from the ramparts. 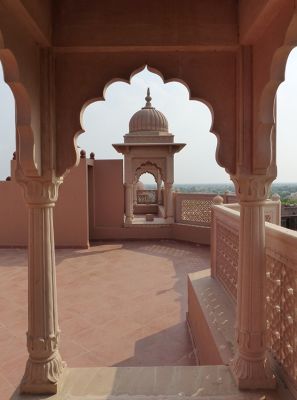 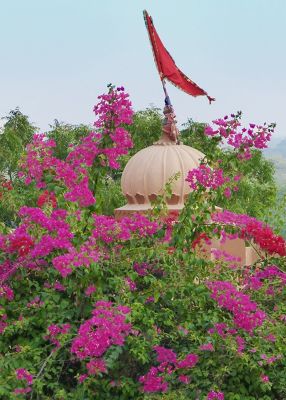 This is a historic fort now converted to a hotel, although the owner (a descendant of the Thakurs of Khimsar who once ruled this region and were themselves descendants of Rao Jodhaji, founder of Jodhpur) still lives in one wing. Construction of the fort was started in 1523 but apparently the family only lived here from the 18th century onwards (I don’t know what they did with it prior to that!) It is a large sprawling complex of buildings built in beautiful honey-coloured sandstone. The grounds are quite extensive and include a lovely looking pool. There is also a spa, tennis court and small gym. Entertainment in the form of traditional musicians and dancers, and a puppet show is laid on in the evenings. For car enthusiasts, there is a collection of vintage cars on display in the royal garage. 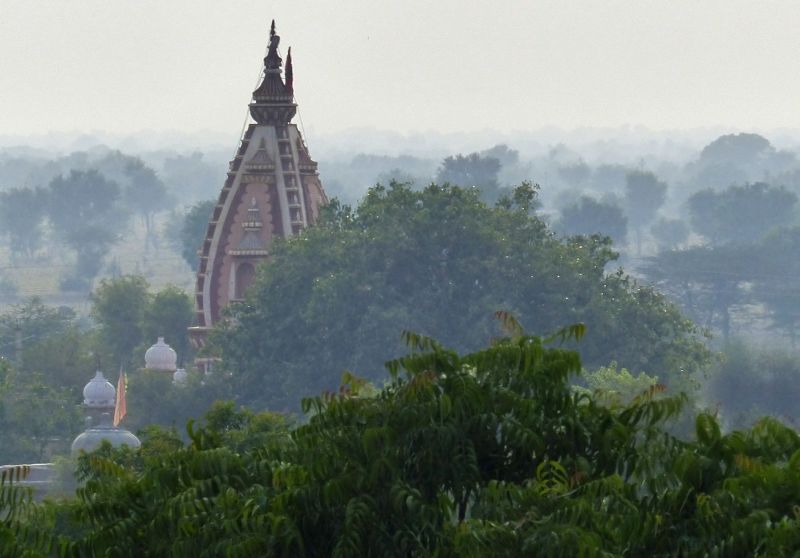 View from the hotel

We had one of the standard rooms but it was nevertheless very large and comfortable. It was located towards the back of the main building on the upper floor, and we had a small staircase in our room that led to a door out on to a roof terrace – perfect for star gazing, although it was a rather hazy night. 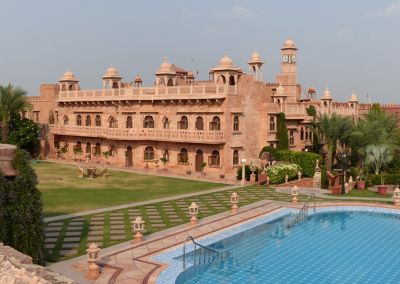 Pool with our block beyond 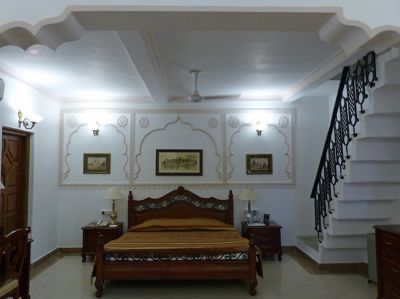 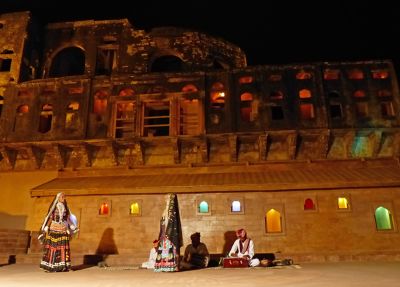 Musicians in front of the ruins

When we arrived at Khimsar Fort we were told that local musicians would perform below the ruins of Fateh Mahal that evening. There is a story attached to these ruins. They are named after Fateh Pir Baba, a Sufi saint who blessed the ruling family. When he died, he was buried here next to the fort walls. At that time a residence was being built just next to the spot chosen for his tomb. The ruling chief died during the construction and people said that this showed that the saint's spirit was not in peace. Work was halted and the building was left incomplete.

A small performance area has been created here, with a semi-circular seating area. We went along as directed and found a group of five here. One of the musicians tried to teach us to play his traditional castanet-like instruments, but we couldn't get the hang of the grip, so left him to it! We certainly weren't going to emulate the girl who danced on knife blades (even if these weren't sharp – we had no way of knowing) and on nails! 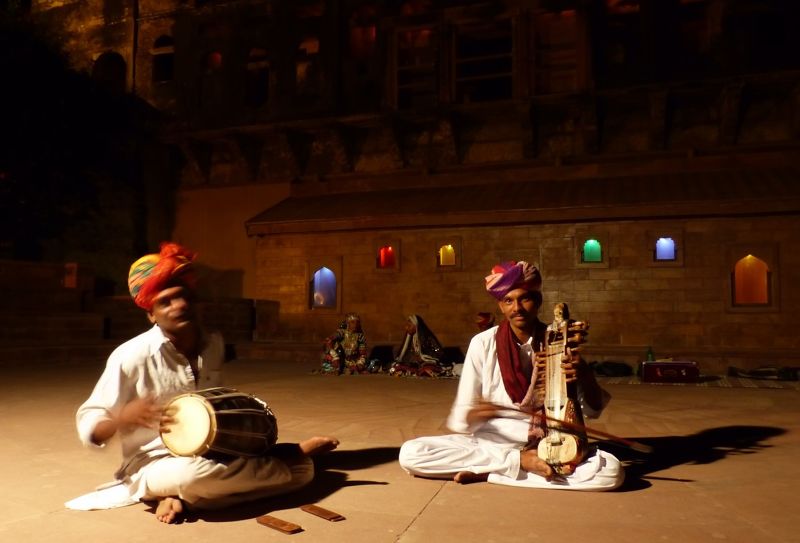 The performance was quite short but we enjoyed it and I loved the colourful costumes too. I made a short video which I think gives a good flavour not only of the performance but also of Chris’s reaction when the knives were brought out!

After the show finished we went for dinner. With very little available in the village we decided to eat in the hotel, as I imagine most guests do. As far as we could gather (the staff have quite limited English compared with other hotels we stayed in) it's possible to get an a la carte meal in the restaurant, but in the dry winter months most people, including us, opt for the buffet served up on the ramparts. While buffets are not my preferred option, the setting made up for that – a lovely view of the fort itself, a pleasant breeze after the afternoon's heat, and music drifting up from the village.

We stayed on a while after dinner enjoying the setting and another beer. To be honest the setting was the best thing about this meal, as the food was really just ordinary. They have something of a captive market – as I said, few visitors are likely to venture into the village to eat (it's very much just a local village with no tourist facilities, even of the most basic nature). Still, the location was lovely, the service friendly (our waiter kept bringing more poppadums to go with our post-dinner beers!), and the price very reasonable, so we were pretty happy with our evening. 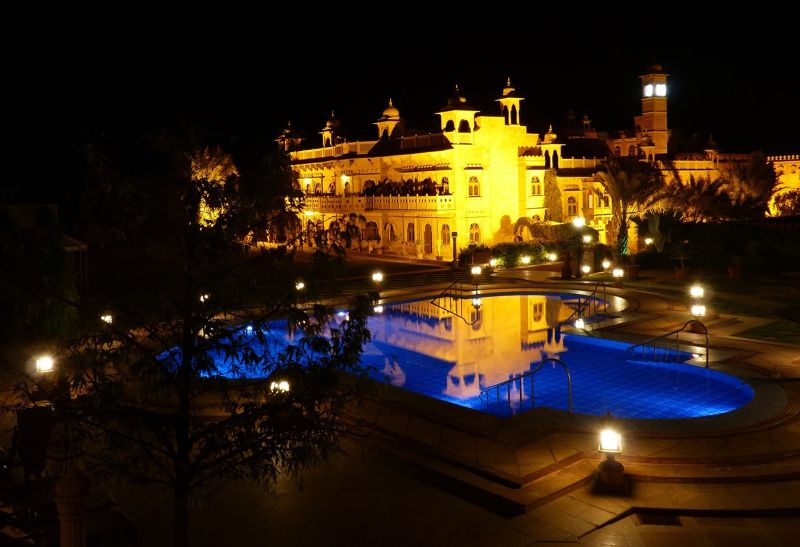 And after dinner, a stroll around the ramparts back to our comfortable room, to rest before another long drive tomorrow.