Of cranes and camels

The road to Jaisalmer 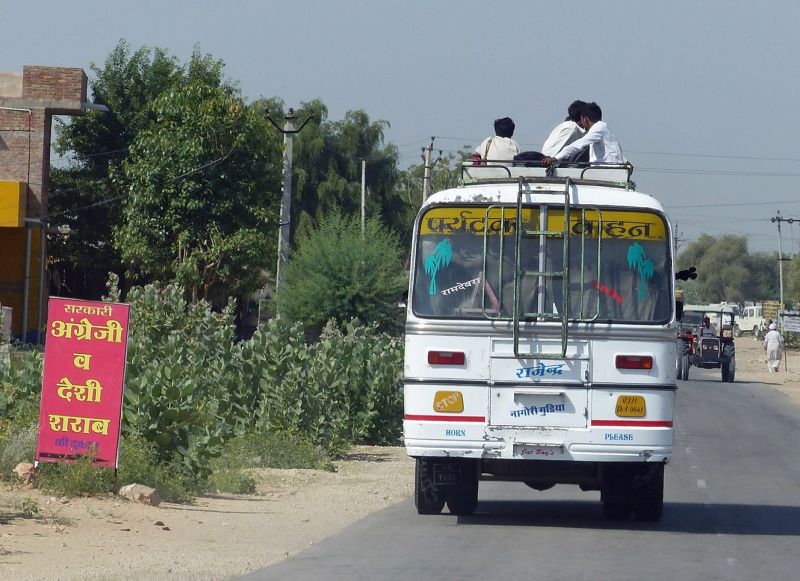 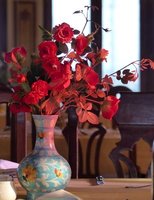 Today was another long but fascinating day on the road in Rajasthan, starting from Khimsar Fort hotel where we experienced a uniquely Indian twist on the buffet breakfast. Food was indeed set out on long counters for us to help ourselves, as you might expect, but somehow the staff were too keen to be helpful to have really grasped the buffet ideology and they kept bringing us things – a second glass of juice, toast, bananas … The room itself was lovely, with sunlight flooding in through tinted windows and portraits of generations of the family staring down at us as we ate. Had we not been excited to see what lay ahead for us on the road we would have been somewhat reluctant to leave this magnificent hotel.

Our drive to Jaisalmer from Khimsar, with the ever-helpful Mehar, took about five hours (not including stops). The road took us through small villages and across the Thar Desert landscape. Some may find this dry flat landscape dull, but I have always loved deserts and I enjoyed this drive a lot. And we made some particularly interesting stops en route too.

As we drove through the Thar Desert towards Jaisalmer I asked Mehar if he thought it would be possible to stop to photograph some of the small round grass-thatched houses that we saw either side of the road. 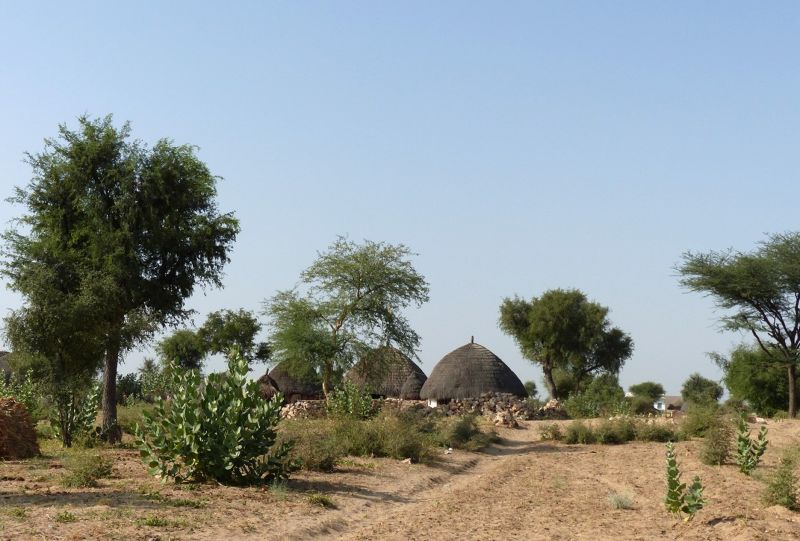 I had in mind a few shots from distance with the zoom, if he felt that would not be resented. But when he spotted a suitable home and stopped the car he suggested that we walk over to it. Would they mind, we asked - not at all, he replied. 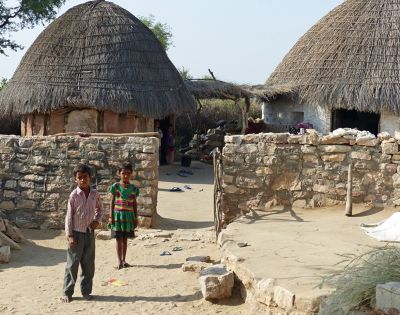 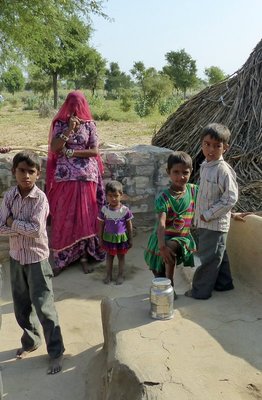 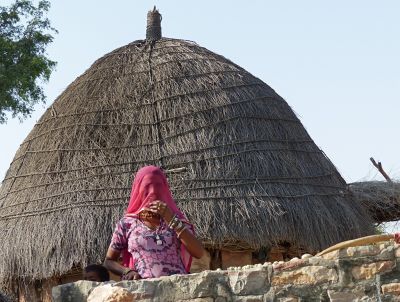 So we strolled among the succulents and a few low-growing gourds to be welcomed by two children near the entrance (it was festival time and there was no school). Their mother came out to join them and when Mehar asked if we could take photos, agreed willingly - and not just of the house, we could photograph her and the children too. An older brother came over to join us, then children from another nearby house came running. We were causing quite a stir! 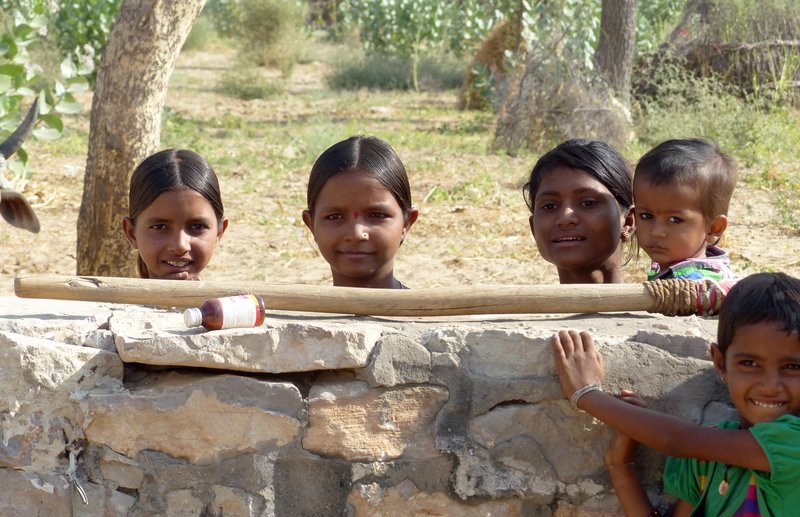 Decoration on the ground 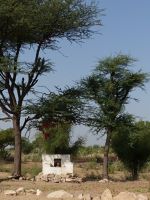 Mehar explained how the hut outside the wall was for the cows, while inside there was a large sleeping hut, a slightly smaller cooking hut, and two little ones to store grain. The family also own a nearby stone house, which has electricity, but prefer to use that only when the weather is cold and during the rainy season. The rest of the time these grass-roofed houses are cooler and they are happy there.

On leaving we offered the mother some rupees in thanks, so she might buy some things for the children perhaps, but she didn't want to take it, saying she was simply happy that we had visited. Mehar persuaded her though, helped by her small daughter who took the notes willingly!

Most of the children then followed us to the car, insisted on posing for more photos there, and then waved us off. Mehar had never stopped at this place before, so this was far from an everyday occurrence for them, and I do feel they enjoyed it as much as we did - it certainly didn't feel at all voyeuristic as some of those contrived "visit a village home" tourist experiences can do. 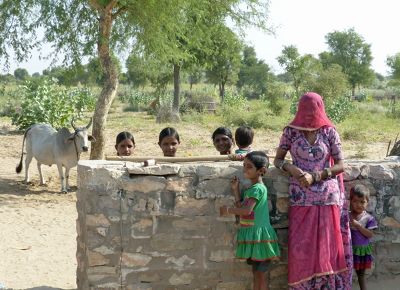 On the road between Khimsar to Jaisalmer we passed through Khichan, a rural village that would be unremarkable were it not for the fact that it has become the wintering place of choice for a huge number of Demoiselle cranes. Mehar suggested a stop here on our drive from Khimsar to Jaisalmer, and always up for seeing as much as possible on our sometimes long drives between the various cities we visited, of course we said yes. He said there would be lots of birds so I imagined a nature reserve of some sort, but this is something rather different. 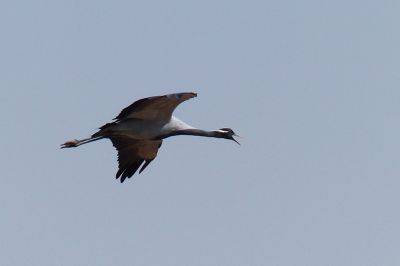 On arriving in the village he turned off the main road for just a short distance. He parked up and we paid the small fee (10 IR per person, plus 20 IR for the car) and walked up a short slope to the edge of the lake. There on the far side was a large flock of the cranes. The noise was considerable and it was fascinating to watch them as they were continually on the move – some taking briefly to the air before landing again on or near the water, others wading and drinking or feeding. 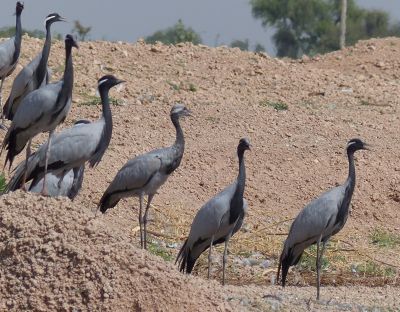 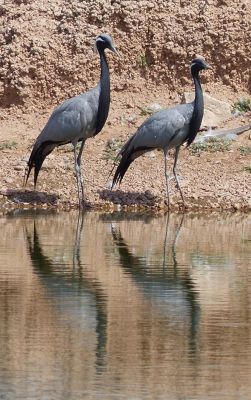 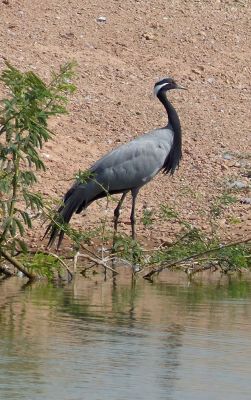 But why are they here in such numbers? Well, this is a village with a significant population of Jains, who value all living things. In the 1970s a married couple here were given the job of feeding the pigeons, something that Jains do all over India (as, from what I observed, do many Hindus). As winter approached some demoiselle cranes started to join the pigeons and eat the grain that this couple were spreading on the ground. During the course of that first winter about 100 cranes came, and the next winter 150. But the local dogs started to hunt the cranes, so the couple asked the village assembly to make land available to create a safe feeding place for the cranes. This was agreed as the people here loved the cranes because of their vegetarianism and monogamy. Other villagers helped to build a fenced-in chugga ghar (bird feeding home) and local traders donated grain. From this small beginning a major migration has grown up, with thousands of cranes visiting the village every winter. 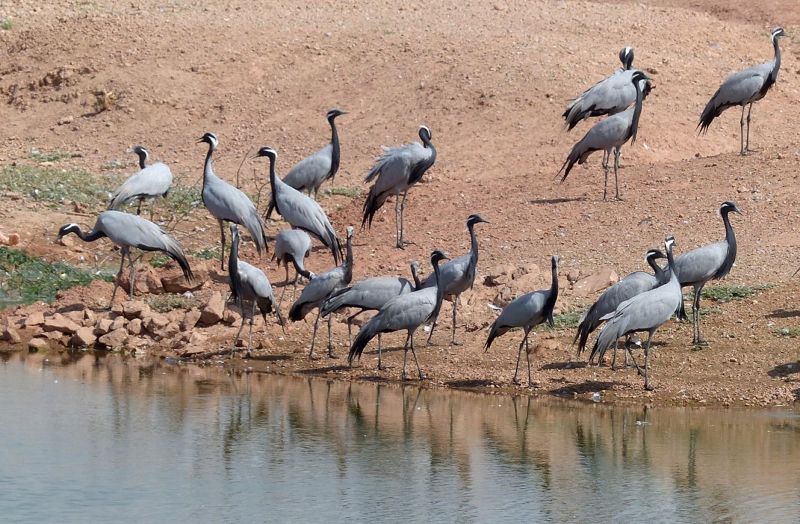 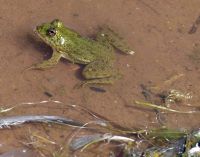 There are tiny frogs too!

Feeding them has become a major initiative for the locals. There are now a number of feeding houses where the cranes congregate each morning for breakfast, before moving on to spend their day by the lakes on the edge of town, such as the one we visited. At night they leave to roost in the fields around the village, before returning the next morning to feed again. It’s possible if you are here early enough to watch the feeding, but if you come later as we did you can visit the cranes by the lakes. The small fee you pay goes towards buying the vast amounts of grain needed.

It’s not a bad idea to bring binoculars if you have them as the cranes congregate on the far side of the lake. We let Mehar have a look through ours, which he enjoyed, and some of the local village boys who were hanging around also had a go and seemed to find the new perspective on their avian visitors rather fun!

Other sights along the road that day included several of the colourful lorries I never tired of photographing (and one of these was possibly the best of the trip, featuring a vibrant Taj Mahal!), several antelopes, a group of camels crossing the road, and a stop at a level crossing for the Brikaner to Jaisalmer train to pass. 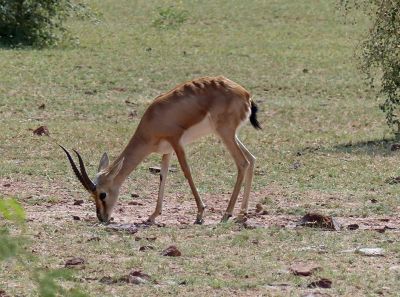 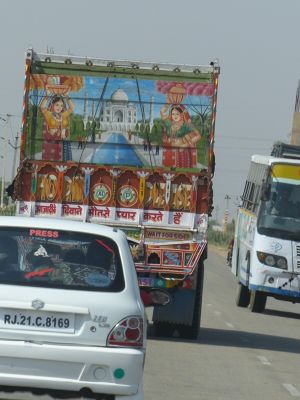 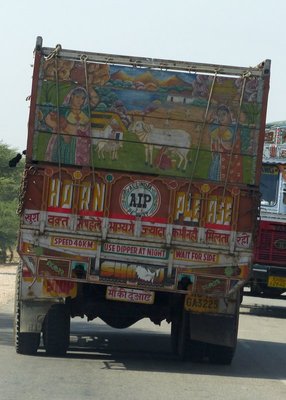 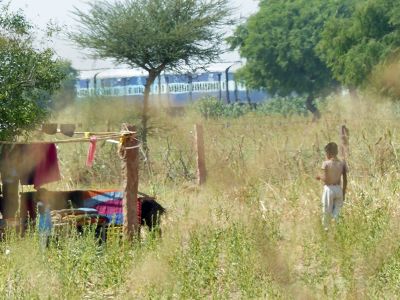 Jaisalmer is known as the "Golden City" because of the sandstone with which it is built, which glows gold in the sunlight, and arriving at Fort Rajwada in the late afternoon we could see that golden glow on the ornate entrance gate as well as on the building itself. 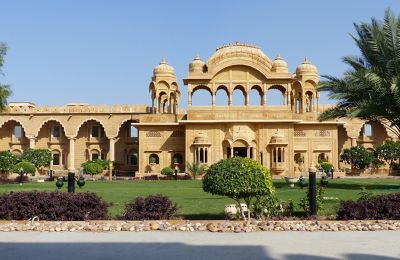 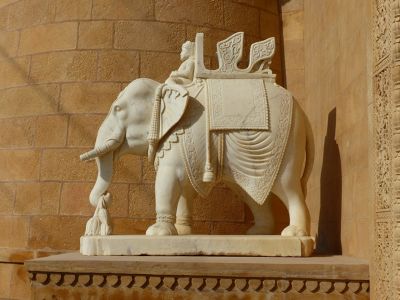 As everywhere, we were given a friendly welcome, with a cold drink, cooling towels and a garland of artificial flowers. We were then shown to our room, which was lovely, as was the building overall. The pool looked tempting, but we decided to leave that for the following day and instead made use of the hotel wifi to catch up on messages (the hotel offers a small amount of free wifi, after which you have to pay for a package according to the amount you want, although slightly annoyingly you can't use and then pay for what you had, but instead have to say in advance what you want).

At about 5.00 pm there was a knock on our bedroom door. Opening it I found a couple of men with a cleaning trolley offering "evening service". They insisted on closing our curtains for us and switching on the lights – both tasks we could have done easily for ourselves had we wanted to. As it was, with more than an hour of daylight left, we immediately reopened the curtains as soon as they had left, and switched off the unnecessary lights! It was helpful though to have our supplies of bottled water topped up and that alone was maybe worth the tip they so obviously anticipated. 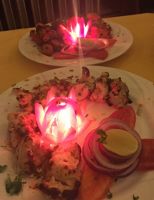 We could have had a barbecue dinner by the pool here, but it was rather a warm evening we decided to eat in the air conditioned restaurant, Sonal, where you can choose between a buffet and a la carte meal – and naturally chose the latter as I’m not fond of buffets. I like to be served at table rather than scramble for access to the food among sometimes over-eager diners, and I also question the hygiene aspects when food can have been siting there for some time. This proved be a good decision – the food was all delicious and was brought to the table in rather spectacular style, with small tea lights burning inside the delicately carved tomatoes that ornamented each main dish. We returned the following evening and were equally happy with our meals and the service. Perhaps our tip on the first evening had been on the generous side, or maybe the waiting staff appreciated guests who chose from the a la carte menu – either way the head waiter welcomed us back with a broad smile and insisted we move from the table near the door where we had been seated to one he considered much better on the far side of the room! 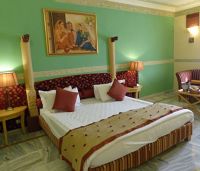 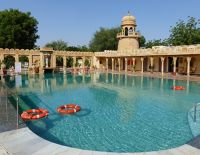 Our room, and the pool