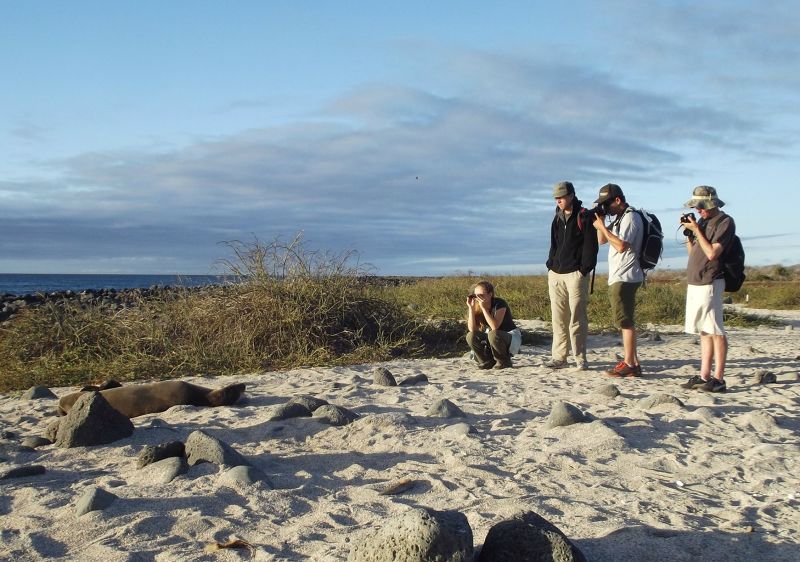 Taking photos on the beach

The Angelito from North Seymour

As you can imagine, tourism to the Galápagos Islands is very strictly controlled. There are about 60 designated “visitor sites” which you can visit only with an authorised guide. You stick to a marked trail, leaving most of the island free for the animals to enjoy in peace. Some islands have only one visitor site, some have two and the larger ones have multiple sites. Each site is designed to showcase specific scenery, vegetation, and wildlife, although much of the latter can be seen at most locations. And each site will be designated as a “wet” or “dry” landing, depending on whether you have to wade ashore or can step directly on to land (usually a small stone jetty). Before each landing our guide, Fabian, told us what to expect and what footwear would be most suitable (“I recommend you tennis shoes” became something of a catch phrase!) Normally these briefings took place the previous evening but on this occasion we had just boarded the Angelito after landing at Baltra, so our briefing took place as we sailed.

North Seymour was the first island we visited on our Galápagos cruise on the Angelito, on the afternoon of our arrival day. Many cruises do this, as it is very near Baltra where most tourist flights arrive. And it’s a great introduction to the Galápagos! This is one of the smallest islands in the archipelago, less than 2 square kilometres. It is rather flat and was created by an uplift of land rather than, like many of the larger islands, being the eroded top of a volcano.

The landing here is a dry one, on lava rocks dotted with crabs. Even a small boat like the Angelito can’t moor directly at the island, so to cross to the island we took the pangas or small dinghies. We wore life-jackets every time for these short crossings, putting them on before getting into the dinghies and discarding them in the boat before stepping out on to the shore. 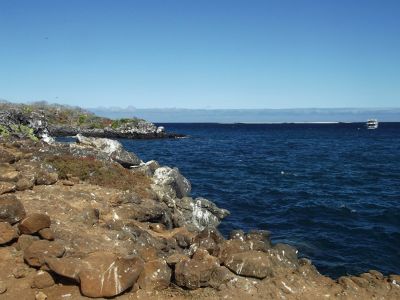 Rocky shore near the landing place (with swallow-tailed gull)

Once on the rocks we all gathered around Fabian for a first introduction to the island, while the dinghies returned to the Angelito to await his call later to pick us up. This way the landing place is left free for any other groups arriving on the same island. Sometimes we did get an island to ourselves, but inevitably on others there would be more than one group there at a time, so we had to leave room for them to land. But Fabian was quite clever at making sure we didn’t get too caught up in other groups – for instance, we often went the opposite way round a loop trail so that we just passed them at one point! 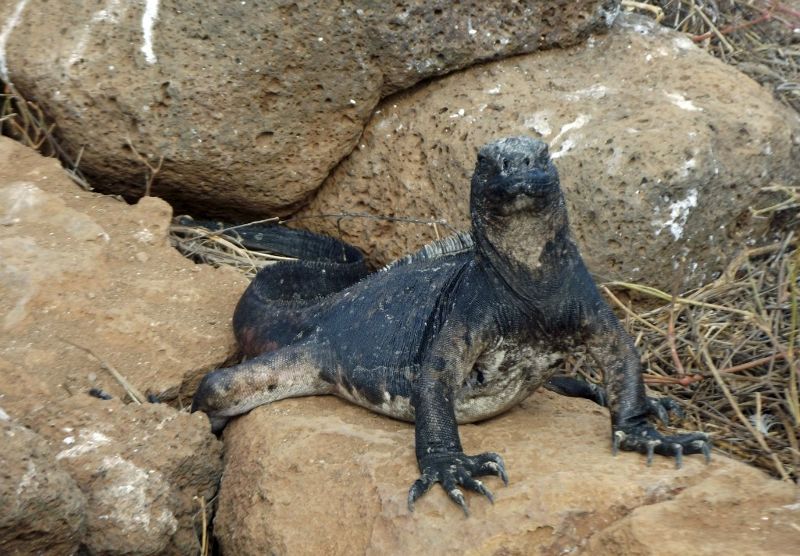 The trail on North Seymour is about 2.5 km in length and is rated as moderate/difficult, although as an inexperienced walker with a dodgy knee I didn’t find it too bad! It starts here on the lava rocks by the landing place. This rocky area was a good introduction to some of the wildlife of the Galápagos, as we saw our very first endemic species here, the idiosyncratic marine iguanas. These are the world's only sea-going lizard. They have developed a flattened snout and sharp teeth in order to feed on the algae on the underwater rocks, and can stay submerged for up to ten minutes, before having to come up for air. When not feeding, they are usually found sunning themselves on lava rocks, and this was how we first encountered them here on North Seymour.

We also saw swallow-tailed gulls here (endemic to the Galápagos), and lava lizards, as well as our first Galápagos dove. 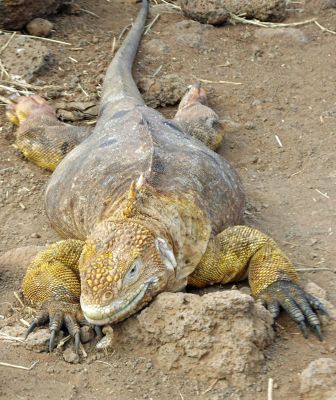 From here we headed inland on a rocky trail which took us over mainly flat ground through a forest of grey palo santo trees and opuntia. This is where we saw our first land iguanas, and realised for the first time just how close we could get to the animals here.

There is an interesting story attached to the land iguanas here on North Seymour – a rare example where man’s interference in nature has proved to have a positive consequence. It is told fully in a Galápagos Online blog article, but to summarise:

In the early part of the 20th century neighbouring Baltra (also known as South Seymour) was home to numerous land iguanas, because of its plentiful supplies of opuntia or prickly pear cactus, their favourite food. In the 1930s the members of a scientific expedition noticed that, surprisingly, there were no land iguanas on North Seymour, despite it having even more vegetation. They had already been concerned to note that those on Baltra seemed to be suffering from starvation, so decided to move some to North Seymour. Such interference would normally be deplored, as introducing non-native species can have a disastrous effect, but it turns out to have been providential. In 1943 a military base was established in Baltra, and shortly after the end of the war land iguanas became extinct on that island. The reason for the extinction has been speculated for many years. The military personnel stationed here have been blamed for killing the iguanas for sport, but it seems more likely that the destruction of their natural nesting habitat, through the use of local sand etc. in construction, was to blame, and/or possibly workers from the mainland killing them for their skins. 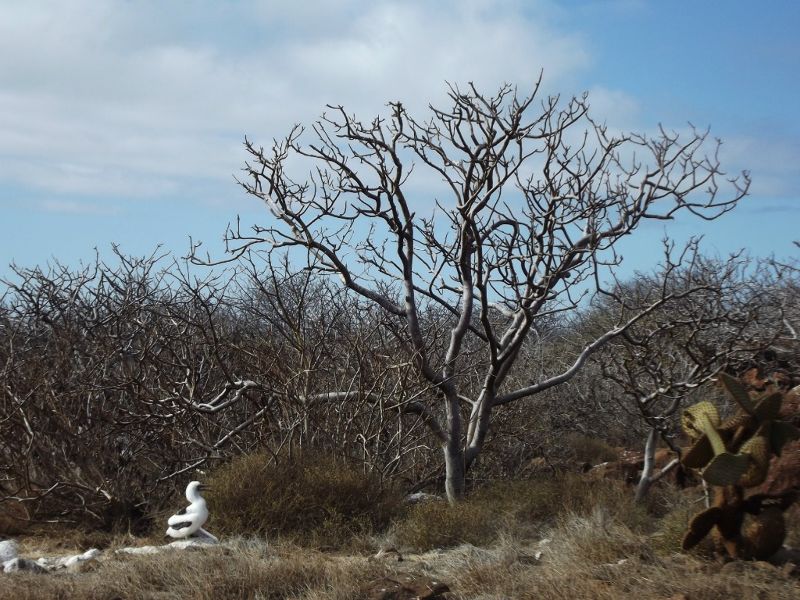 This trail took us through an area full of blue-footed boobies, and also magnificent frigatebirds. I had been looking forward to seeing the former especially, as they seemed to me one of the symbols of the islands, so it was great to see them on this very first landing. Even more exciting, some of them had chicks! Lying so close to the equator, the climate in the Galápagos Islands is relatively stable, and many of the species that breed here do so year round. Here on North Seymour you are likely to see blue-footed boobies with eggs or chicks whenever you visit. 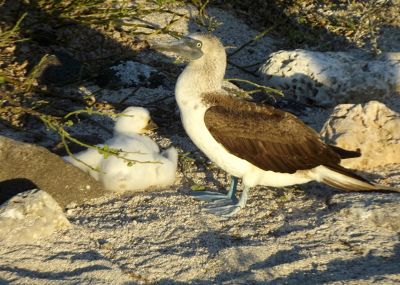 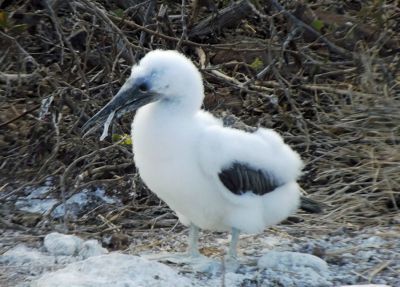 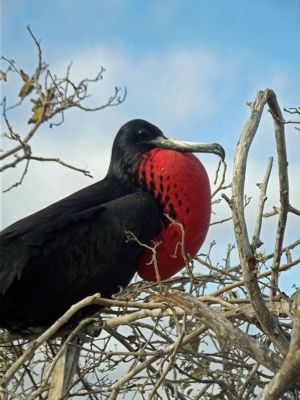 But it was the magnificent frigatebirds that most attracted my camera – those bulbous red throat displays of the males are pretty hard to ignore! North Seymour is home to the largest nesting site in the archipelago of these well-named “magnificent” birds.

They were sitting in the bushes either side of our path, and many of the males were inflating their scarlet throat pouches, known as "gular pouches", to attract females to mate with them. We saw several groups each vying for the attention of a single female who happened to land in their tree – fascinating to watch and excellent subject-matter for our cameras! 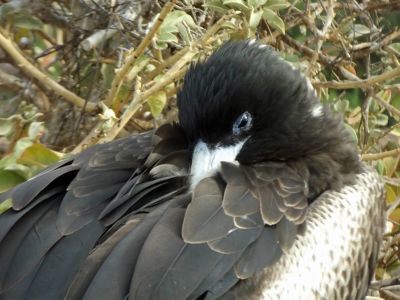 Back to the coast 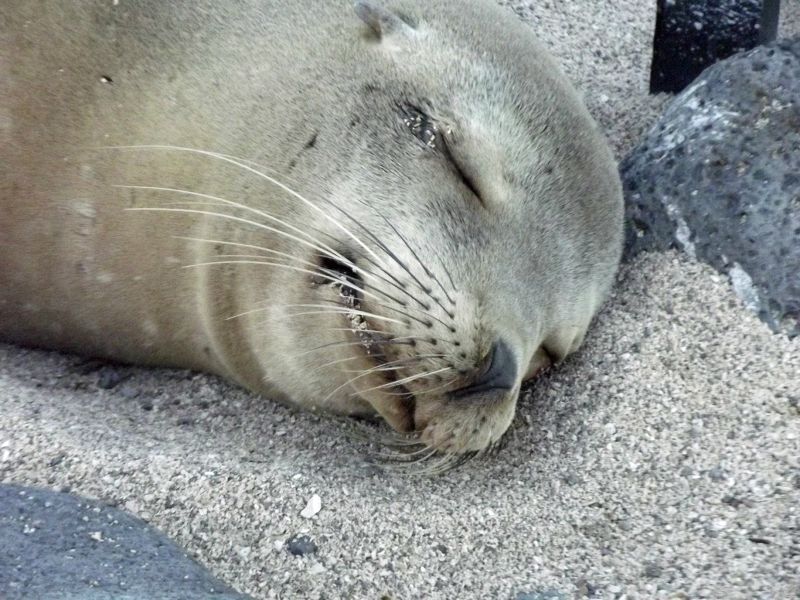 After a while the trail looped round and returned us to the coast near where we had landed, but further west. The beach here is home to a colony of Galápagos sea lions. It was our first close look at these – and I mean close! We were still learning just how tame the wildlife here could be, and were thrilled at the photo opportunities. We spent a long while here, slowly making our way along the beach and stopping frequently to photograph yet another cute pup. The mothers too looked very photogenic in the golden light of late afternoon. Sea lions typically have just the one pup, and look after it carefully for the first six months of life, so here, as elsewhere on the islands, there were plenty of opportunities to observe the interactions between mum and baby. 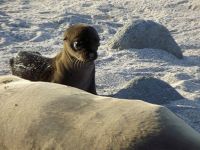 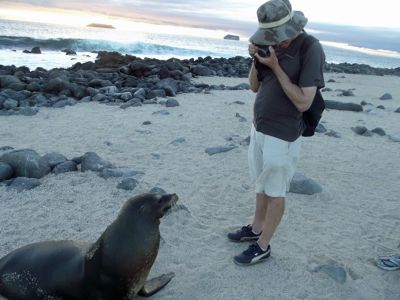 As we walked back to our landing point the sun started to sink and we enjoyed some beautiful light for these last photos, with the skin of the sea lions almost golden in colour. There was a lovely sunset over the neighbouring island of Daphne Major. What a wonderful start to our explorations! 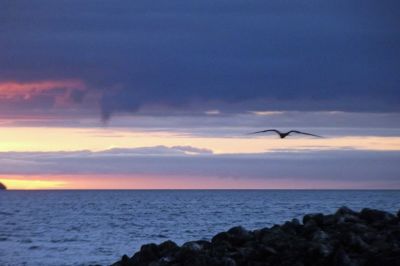 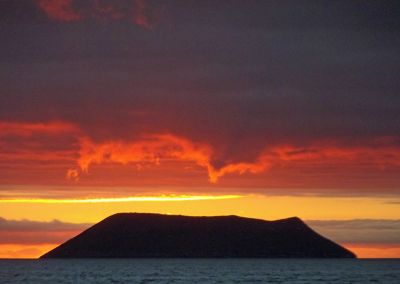 Evening on board the Angelito

Relaxing in the lounge
Geoff and Simon

Once back on board we were able to properly settle into our cabins, before gathering in the lounge area for dinner. This was our first taste (literally!) of the excellent dining we were to enjoy all week – not fancy but very tasty and generous, and especially impressive given the small size of the galley. It was also a chance to start to get to know each other, which we did over a few beers from the honesty supply (note what you take from the bar on the sheet of paper pinned above it and the tally will be totalled at the end of the week). Fabian also delivered the first of his evening briefings, outlining the plans for the next day when we would visit two of the small islands that lie off Santiago – Sombrero Chino (Chinese Hat) and Bartolomé.

The Angelito spent most of the night moored off North Seymour, before sailing to Sombrero Chino in the early hours of the morning …