Dealing with the mishap, and a holiday resumed

It was just as well that we had enjoyed our ferry ride from Banjul to Barra two days ago, as here we were, back again. My broken tooth necessitated a visit to the dentist, the dentist was in Banjul, and so we were making the day trip from Fathala Lodge (in Senegal). 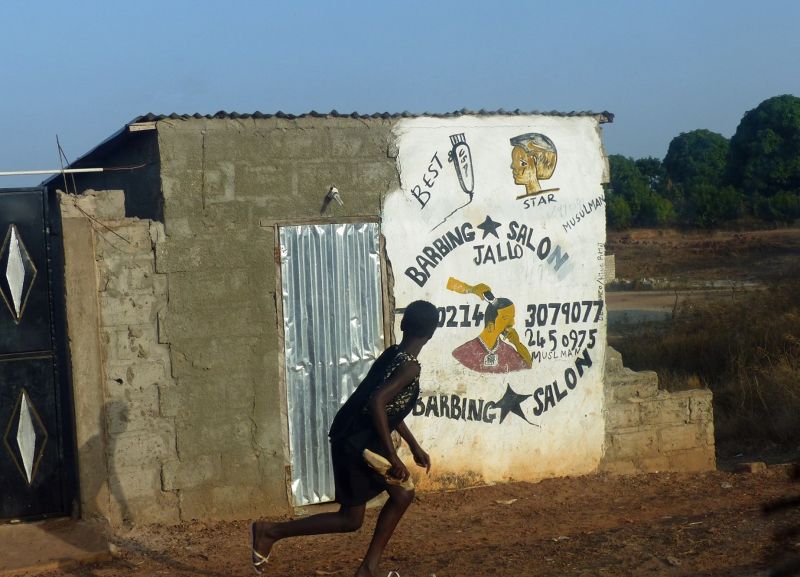 On the road to the ferry

Of course a broken tooth wasn’t going to stop me taking photos and the scene at the port in Barra, where we had to wait quite a while, was as colourful as it had been on our previous trip. Women carrying babies, women carrying chickens, children travelling to school, labourers to work, farmers with goods to sell in Banjul’s markets. 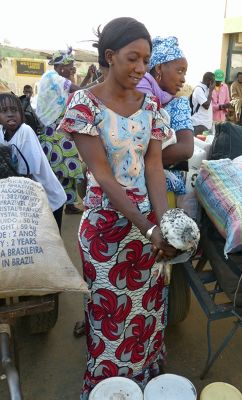 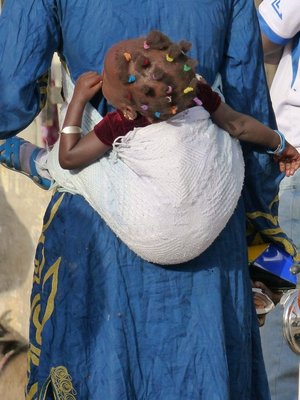 Waiting for the ferry in Barra

And once we boarded there was plenty of activity on the river bank to watch, with colourful pirogues ferrying other locals across the river. I was amused to see how passengers boarded these vessels, carried on the shoulders of one of the boatmen! 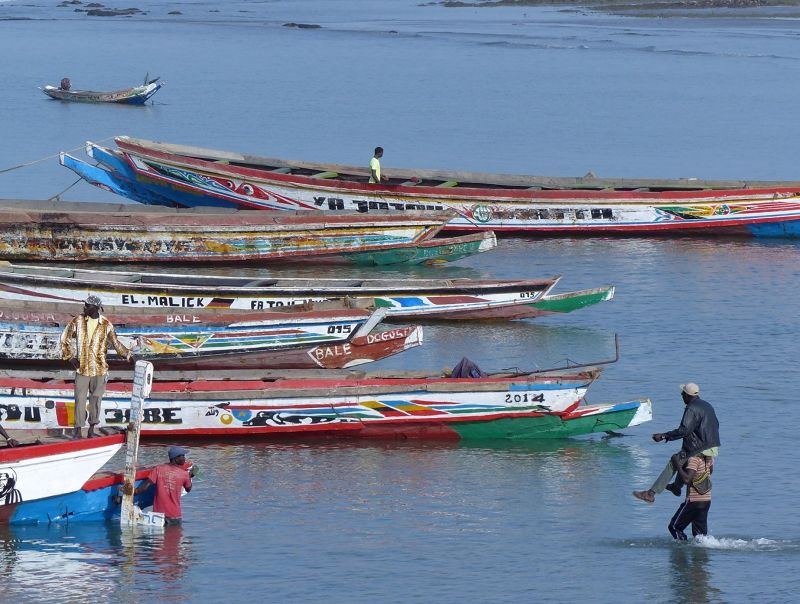 The journey passed smoothly and as before we enjoyed sitting on the top deck and watching all the activity, although apprehension about visiting an unknown dentist in this very different part of the world prevented me from fully appreciating the scenes around me. 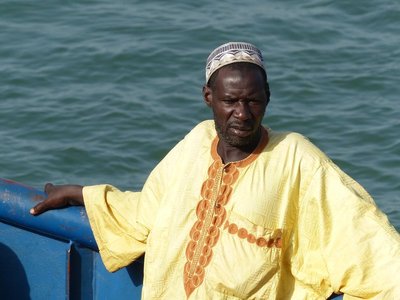 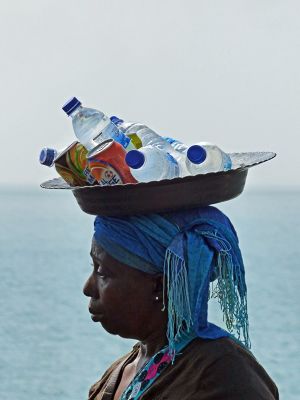 We had been given instructions on how to find the dental clinic in Banjul and had been told that the lodge guide would just see us on to the ferry and then wait for us on the other side, but he insisted on coming with us to make sure everything went well. With his guidance we easily found the clinic, where the dentist was on the lookout for us. Somewhat ironically, since I had been thinking that it was good to be visiting a French-trained Gambian dentist rather than a Senegalese one (after the manager at Fathala told us that the usual practice in that country was to pull out any tooth giving trouble rather than try to save it), it turned out that although living in Gambia he was actually from Senegal! Incidentally, it might also be considered a bit ironic that my dentist back at home did have to eventually remove the tooth to deal with the problem!

Anyway, this particular Senegalese dentist, who spoke reasonable English to match my passable French, agreed with me that a temporary filling would be the best solution in the immediate term. He had soon performed the procedure but not without giving a running commentary on the quality, or rather the lack of quality, of previous work I’d had done on my teeth – even calling on Chris to come and have a look at one point!

But he worked well, and quickly – so much so that we were able to hurry back to the port afterwards and catch the same boat that we had arrived on back to Barra rather than have to wait several hours for the next one. On the way back we got talking to three local guys who had parked next to our vehicle on board, who insisted that I took their photo, so I did! 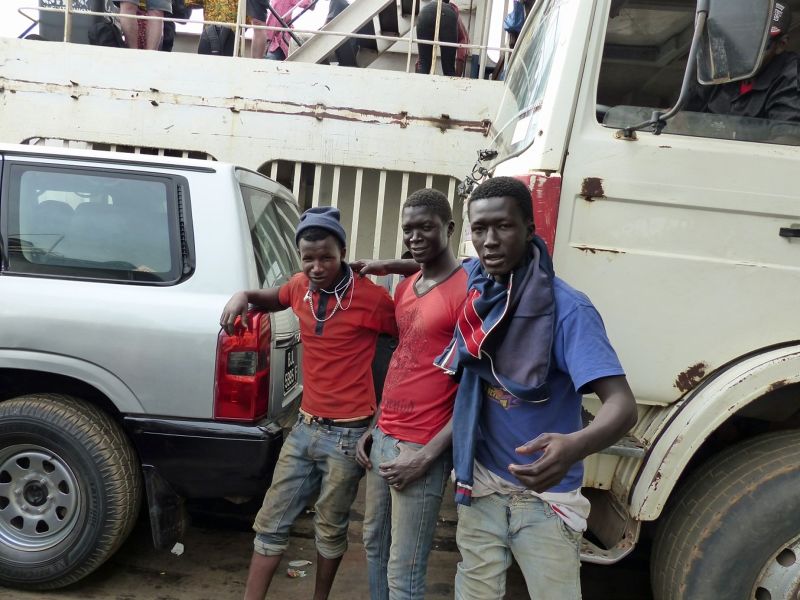 On the ferry back to Barra

What is more, thanks to the speedy work of the dentist, we were back at Fathala in time for lunch, and I even managed to eat some!

By the way, the dentist had done his work well – the filling lasted for the rest of the trip and until I was able to visit my own dentist back in London.

Boat ride among the mangroves

The prompt work of the dentist meant that we were back in plenty of time to go ahead with our planned activity. a late afternoon ride among the nearby mangroves. We took a jeep ride of about half an hour through some small villages, where children rushed out to wave to us as we passed. We felt a little self-conscious and pseudo-regal waving to them from our high perches in the vehicle, but it would have been mean to disappoint them and it was fun to see their excitement. One toddler in particular shrieked with such joy you would have thought we were the only foreigners he had ever seen, despite this being a fairly well-visited tourist area. 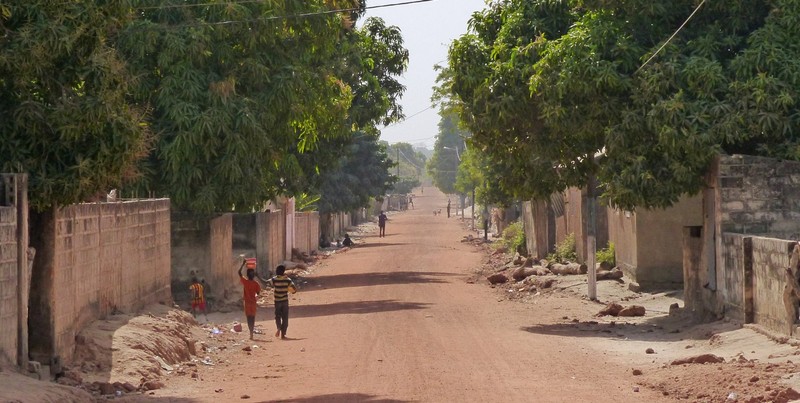 The road through a local village 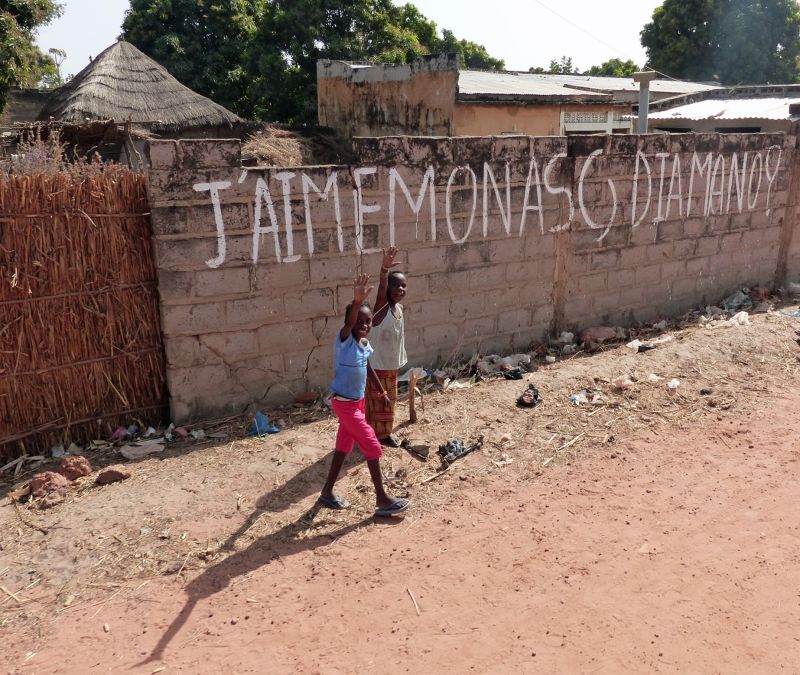 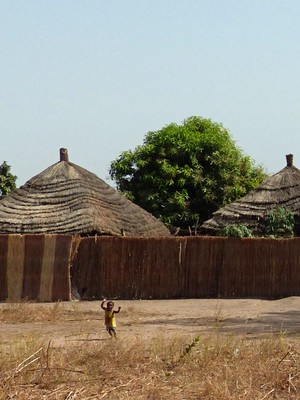 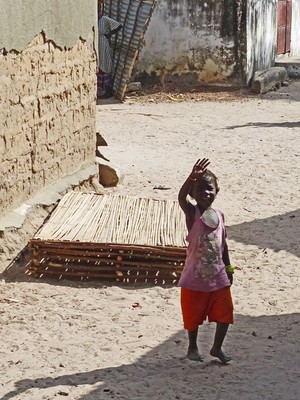 
We reached the point where our boat was waiting for us – one of the traditional local vessels known as pirougues. Once we were all aboard (as well as the two of us there were the two elderly English ladies in our group) we cast off, and spent the next couple of hours cruising slowly among the mangroves. 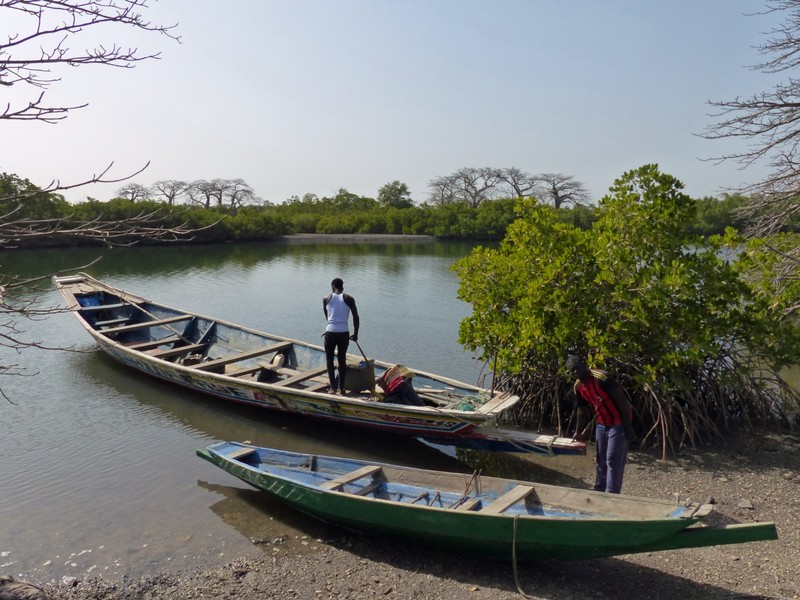 Although there was less bird life than we had seen on similar trips when staying at Mandina Lodge in Gambia two years previously, we did see quite a few. 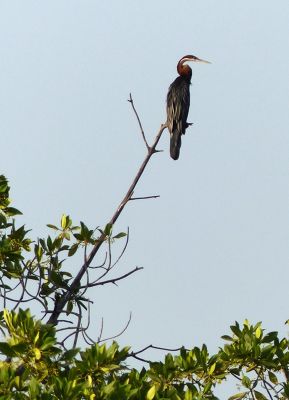 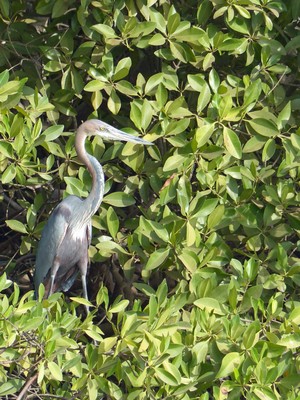 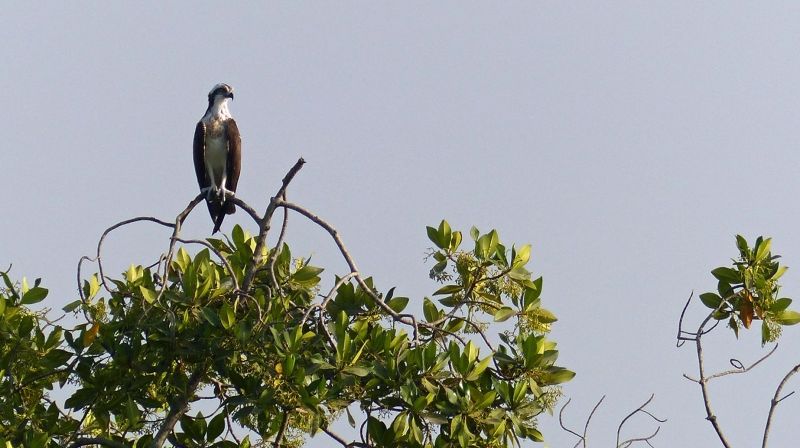 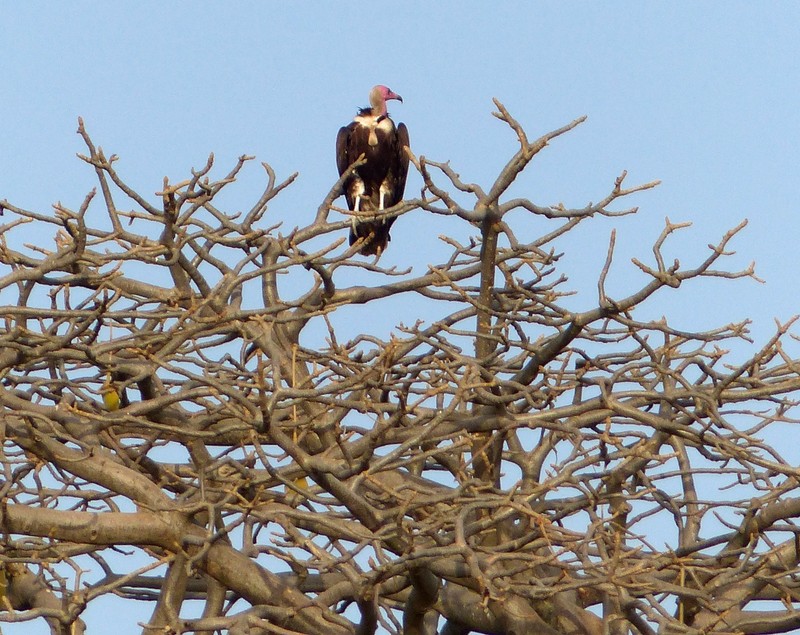 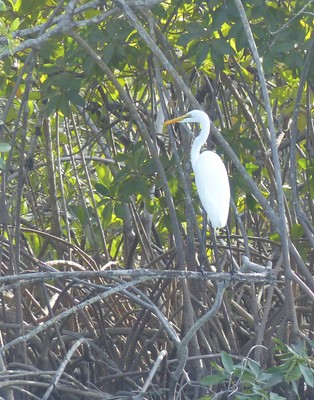 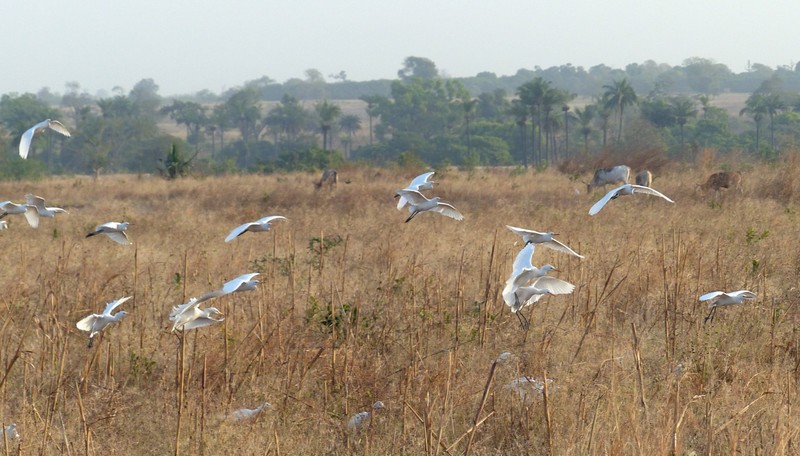 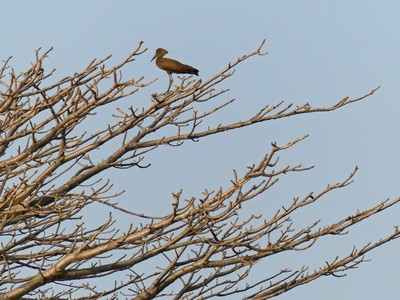 Hamerkop in a baobab

The other birds we saw, but I failed to photograph, were:
Senegal Thick-knee
Lapwing
Pied Kingfisher
Caspian Tern
Whimbrel
African Darter

We also saw a crocodile and, as at Mandina, a number of locals collecting the oysters that grow on the mangrove roots. 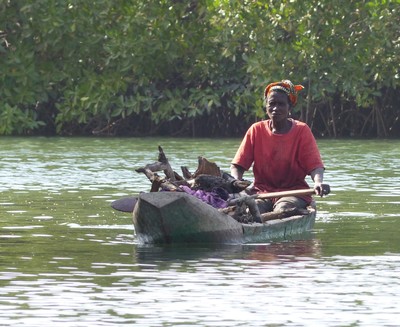 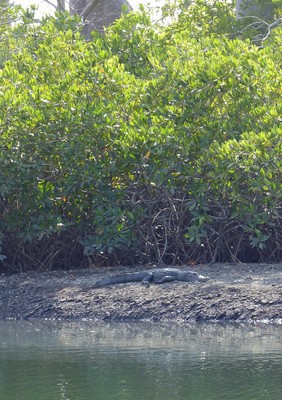 
Part way through the ride we stopped in the shade to enjoy cold drinks and some snacks in this peaceful setting. As we watched we chatted a bit with our companions, who were an interesting pair. They were clearly good friends but were like chalk and cheese! One seemed to be a fairly experienced traveller, taking everything pretty much in her stride, while the other was in an almost constant state of bewilderment. Neither of them could manage to work the rather complex camera that a daughter had lent them for the trip and were in unjustifiable awe of the photos we were capturing – so much so that we swapped email addresses so I could send them some as a reminder of the outing. I wondered afterwards if the mother passed them off to her daughter as her own, so that her incompetence with the camera could remain a secret!

As the sun sank a little lower the light became rather magical, and I especially enjoyed seeing the almost sculptural silhouettes of the baobab trees that dotted the landscape, rising out of the deep greens of the mangrove trees.

Sunset on the river 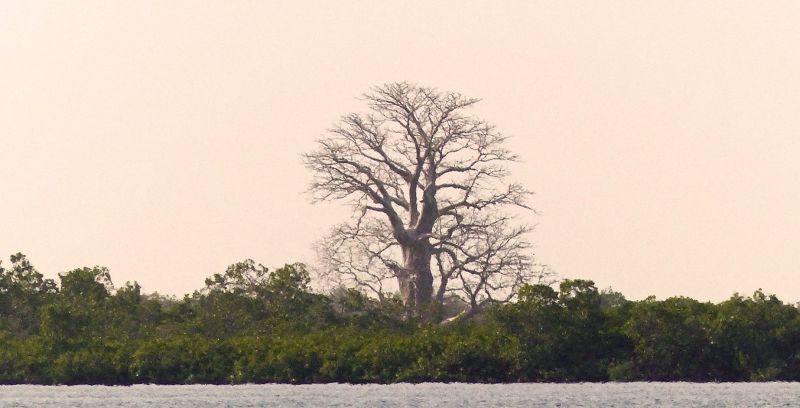 
After a couple of hours we returned to our starting point and boarded the jeep for the ride back to the lodge. The landscape glowed red in the late afternoon sun and our ride home was punctuated by even more greetings and waves from the small children we passed. 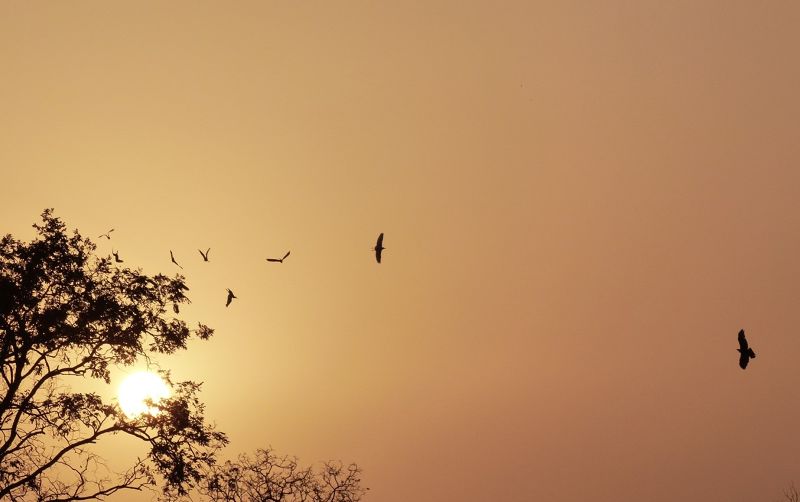 
Although not so exciting as the other lodge activities (and especially the lion walk), this was a very pleasant way to spend a few hours, and visiting the mangroves introduced us to a very different landscape from the dry and dusty bush surrounding Fathala.

We spent the last evening here much as we had the others, with drinks at the bar and a tasty dinner, which tonight I was able to enjoy as much as on the first evening, thanks to my newly mended tooth! And we went to bed in our cosy tent looking forward to seeing more of this fascinating country tomorrow, when we would travel north to the Saloum Delta in the Sine-Saloum region.