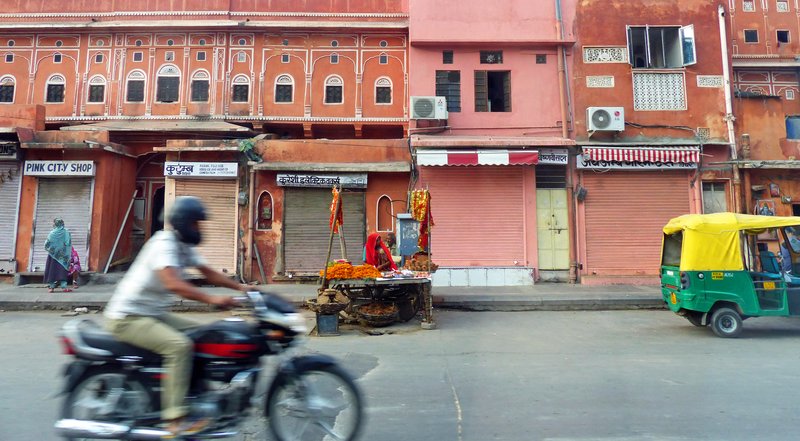 After a morning spent at nearby Amber Fort, our afternoon was devoted to a few of the sights in Jaipur itself. Jaipur is the capital of Rajasthan state and its largest city, although after the hubbub of Delhi where we had been a few days earlier it seemed relatively small to us, and a fascinating bland of orderliness and activity. Cars, rickshaws, motorbikes, pedestrians and the odd cow weave amongst each other while the pink sandstone buildings add a touch of serenity as a backdrop to the chaos. 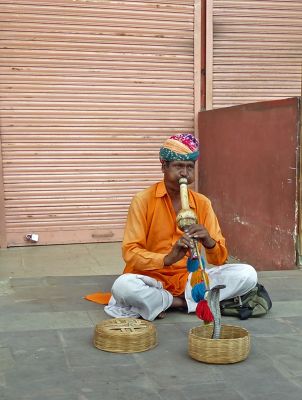 Snake charmer near the Hawa Mahal

The city was founded in 1743 by Ram Singh’s ancestor Jai Singh II, the Raja of Amer. He clearly took the responsibility of founding a new city very seriously, studying several books on architecture and applying the principles of Vastu Shastra, a traditional Hindu system of architecture which among other things aims to achieve harmony between man-made structures and nature. Unusually for Indian cities the centre of Jaipur was built on a grid system, divided into six blocks. The palace and other state buildings were built in the central block, while the remainder held shops, homes and so on. You can still see this pattern if you look at a map of the city.

Jaipur is often known as the Pink City as many of the buildings in the centre are built of pink sandstone, and those that aren’t, are painted the same distinctive shade. This goes back to the time when the then Prince of Wales, heir to the British throne and later to rule as Edward VII, came here on a state visit and (for some reason) the ruler Sawai Ram Singh decided to paint the city in his honour. Since then it has been the law that all buildings in the old town must be so painted and along with the even grid pattern it makes for a very uniform appearance, which is somewhat at odds with the typical Indian chaotic activity on the streets. 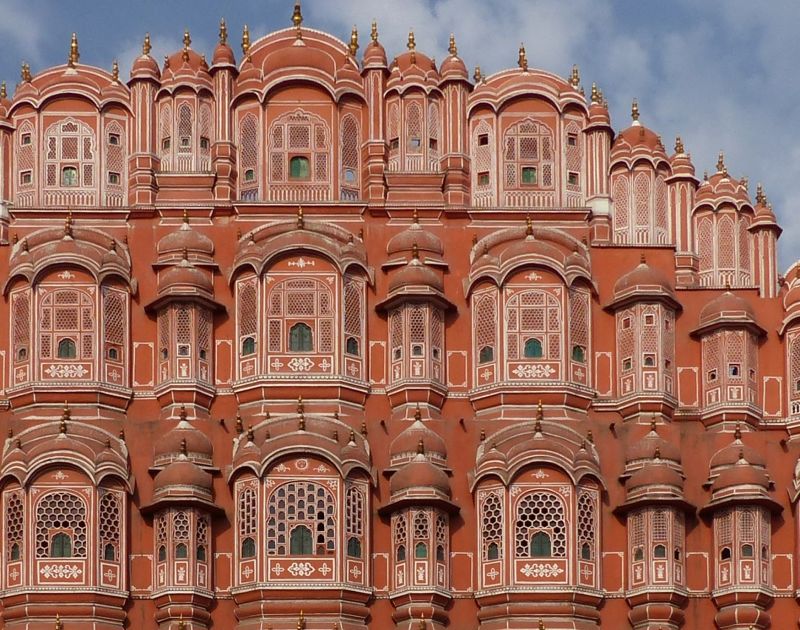 We had already had a glimpse of the city before heading to the Amber Fort that morning, as we stopped briefly by the Hawa Mahal. Of all the pink buildings in the Pink City, this must be the most photographed. It is a fantastical concoction of oriel and bay windows, coloured glass, carved screens in stone and wood, delicate pointed arches – all piled up in five ever-diminishing storeys. To photograph it at its best, with the warm glow of the sun, you must get here in the morning as it faces east and loses its rich colours once in shadow later in the day, which is why we had made a stop here. 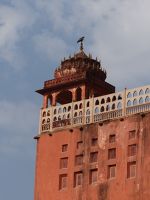 The Hawa Mahal was built in 1799 as part of the City Palace to provide the ladies of the royal court with a series of rooms from where they could observe the life of the city while maintaining their strict purdah. The shape is designed to resemble the crown of Lord Krishna, the Hindu god, while the many small holes that pierce the screens are there to allow the cooling breezes to penetrate – hence its name which means “Palace of the Winds”.

We didn’t go inside but you can do so, and there’s a small museum inside which has some armour and miniature paintings I believe. 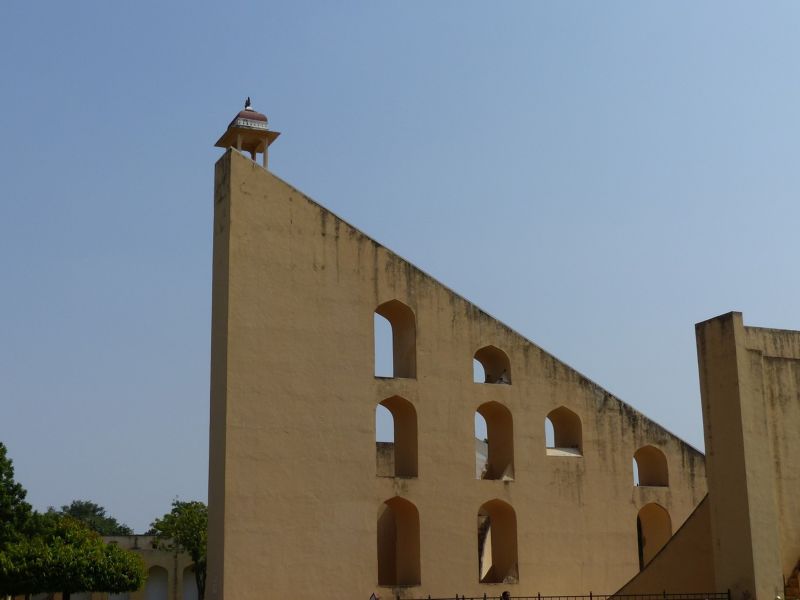 This was one of our favourite sights in Jaipur, and indeed, one of Chris’s favourites from the whole trip – he found it totally fascinating, as did I. For both of us it had a double appeal – not only the amazing science behind it but also the strangely modern beauty of its structures.

The observatory, which is a UNESCO World Heritage site, was built for the Maharaja Sawai Jai Singh II, founder of Jaipur, in 1738. He was a keen astrologer and this is the largest of five similar structures built in India in the 18th century to observe the heavens and measure its movements (the others are in New Delhi, Ujjan, Varanasi and Mathura). Its 19 instruments perform functions such as measuring time, predicting eclipses, tracking major stars, determining the declinations of planets, and calculating celestial altitudes.

The observatory was used until around 1800 but fell into decline in the 19th century. It was restored under British rule in 1902 (but unfortunately with some changes to the materials employed) and again in 2006.

The small sundial here is accurate to within 20 seconds and the large one to an astounding two seconds, although you have to adjust from Jaipur time to Indian Standard Time to assess the accuracy of this – a notice nearby will tell you by how much to adjust. Two large marble bowls (one of which is shown below) crossed with copper wire indicate in which zodiac sign the sun currently sits. 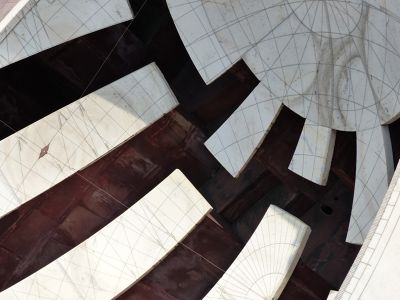 Nearby a striking set of twelve instruments, one for each sign, pinpoints the precise day. Parents would have used these to set the basis for the drawing up of the astrological chart for their new-born child, to be used at key points in their life, especially in choosing a marriage partner. Indeed these things are still important for many Hindus, though they no longer use this observatory to calculate them. 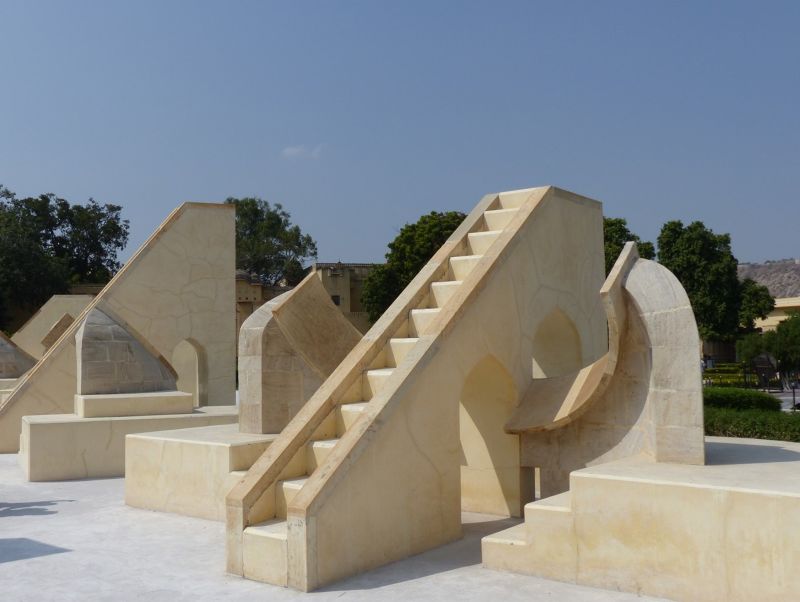 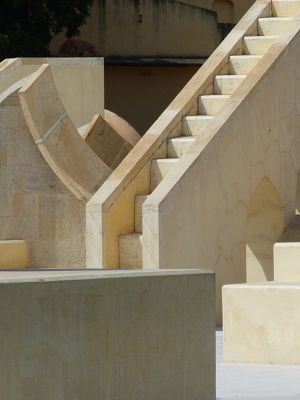 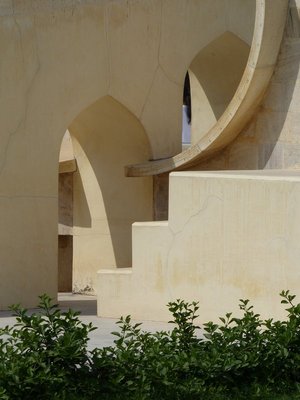 If you are interested (and understand more about the science than I can claim to do), Wikipedia has a full list of all the instruments and their purpose: https://en.wikipedia.org/wiki/Jantar_Mantar_%28Jaipur%29. And a guide is useful at the site as they will explain to you the main functions. But whether interested in the science or not, this is a great place to come for photography, as the sculptural shapes of the various instruments cast their shadows and form interesting abstract patterns that change constantly as you move around the site. 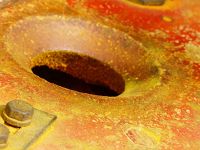 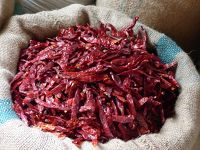 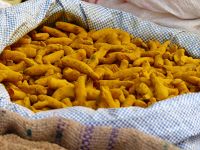 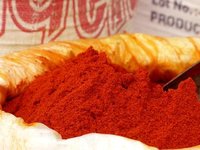 In the spice market

For a slice of local colour (and scents) the spice market is wonderful. A narrow alleyway lined with small shops all selling the typical spices of India - turmeric, chillies, peppers, ginger, cardamom.

Our guide suggested a walk here when we said we were more interested in photography than shopping, and it was a great recommendation. Although all the shops sell very similar goods, he explained that locals all have their favourite vendor, and pointed out the one where he always shops.

We also saw a sugar shop with sugar in all sorts of shapes, including sugar glasses. Wives buy and fill these with water, making sweet water to offer to their husbands for the Karwa Chauth Hindu festival on 30th October. On this day married women pray that their husband will have a long life, prosperity and good health. 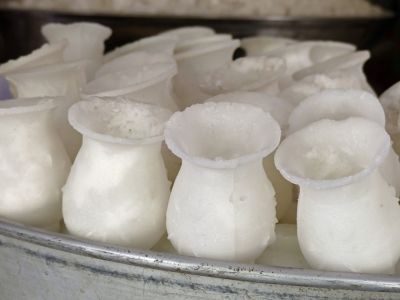 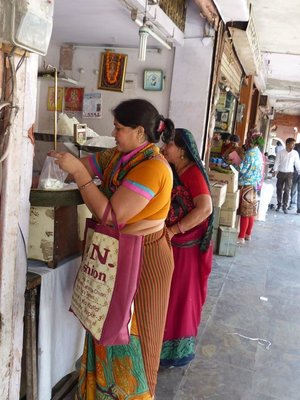 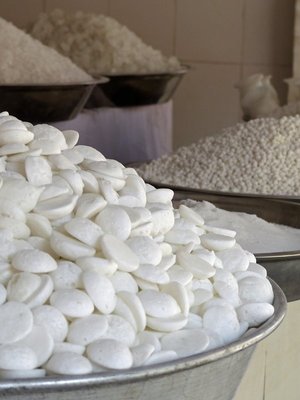 Nearby flowers sellers were stringing garlands for the many festivals around this time of year, as they were everywhere we went on this trip. On a colourful journey this was one of the most colourful spots of all. 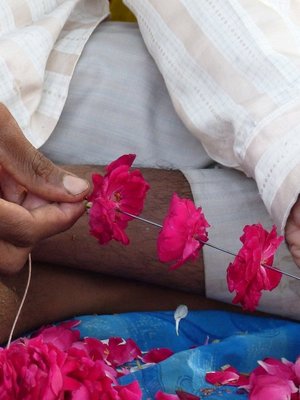 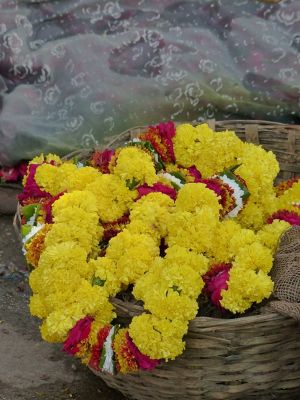 One of the most traditional crafts in the Jaipur area is block printing on cotton or silk, and you are likely to be offered an opportunity to see craftsmen at work. Of course this is also an opportunity for them to persuade you to buy (I succumbed - see below), but even if you don't want to buy it is worth going to see the work that goes into these textiles, and perhaps to have a go yourself!

We went to the Shree Carpet and Textile Mahal where we were first shown the technique by a father and son working together on a design. The colours are all natural – turmeric for yellow, spinach for green, saffron for orange and so on. They work as a team, so the father was doing the first colour and the son following behind to do the next, carefully aligning his block with the first print. We were told that the minimum number of colours (and therefore blocks) used in a pattern is four, and there can be up to nine. 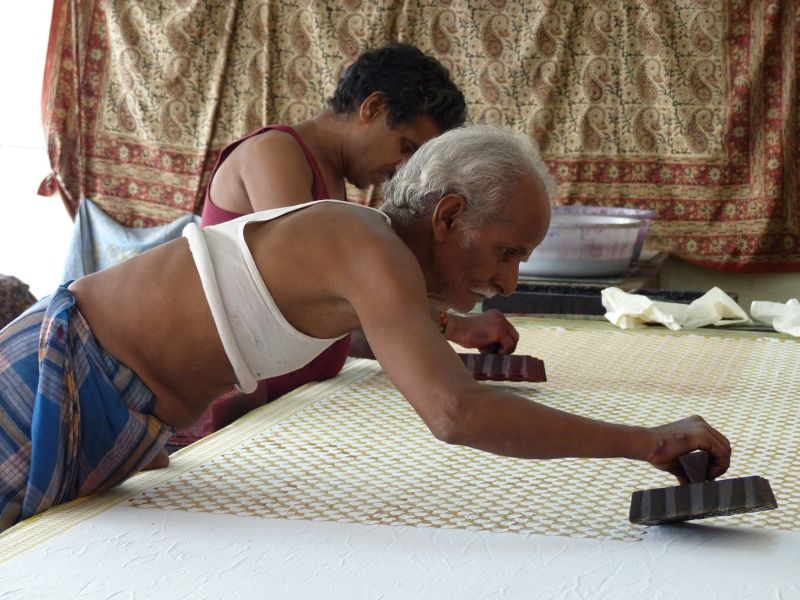 Father and son at work 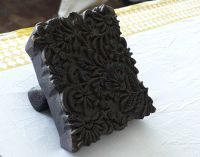 Printing the first colour, and one of the carved blocks 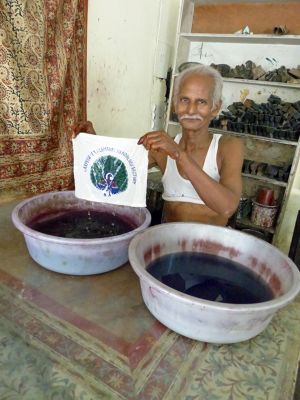 The father then showed us some different blocks and invited us to have a go. To be honest he did most of the work – inking the block and placing it on the fabric. I then hit it to make the print, but not hard enough, so he did that too! When Chris's turn came, he was able to hit harder so at least he could do that part of the operation. Normally fabrics are then dried for four days in the sun, which is when the vivid colours appear, but as there was no time for that the man dipped our piece of fabric in a vinegar solution which speeds the colour fixing process. He then blotted it dry and we left it with him while shopping. By the time we came out of the shop our handiwork was more or less dry and we could take it away as a souvenir of our visit.

Of course, we understood that along with the demonstration would come some pressure to buy – pressure which we planned to resist (although at the back of my mind I thought I might maybe buy a cushion cover if I saw something in suitable colours that I liked). The fact that we bought something rather larger, a fabric throw big enough to cover a double bed or make into a duvet, is, I assure you, not because of especially high-pressured selling (which we are pretty good at resisting) but because we were impressed both by the goods on offer and the reasonable prices. Having seen for ourselves the block printing process we could appreciate the work that went into making these items and we were confident too that we were buying a genuine hand-made piece. You can soon check this if you are in any doubt, as machine-printed fabrics appear perfect while those printed with this technique, using the small hand-held blocks, show the staggers and uneven lines where one block meets the next. You can see this clearly on the right-hand side of the border of our throw in this photo. 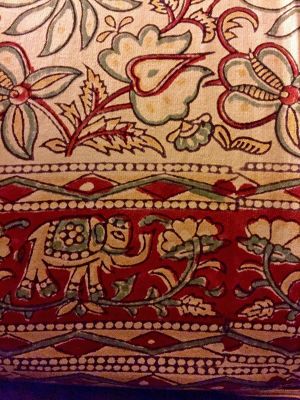 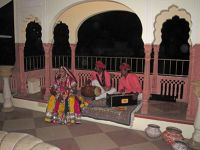 On this, our second evening in Jaipur, we again ate at the rooftop restaurant of Shahpura House, welcomed by the same friendly waiter who had served us the evening before. We enjoyed a shared starter of chicken kebab with mint chutney, a very tasty potato dish with cumin, and a Rajasthani speciality of chicken in a spicy tomato and yoghurt sauce. Prices are very reasonable, especially when you factor in the live show - traditional Rajasthani musicians and dancers. And you can linger after dinner over a drink and watch more of the show, which on some evenings also includes traditional puppets. We were to see several of these “cultural shows” during our time in Rajasthan, but as our first this one was especially memorable.