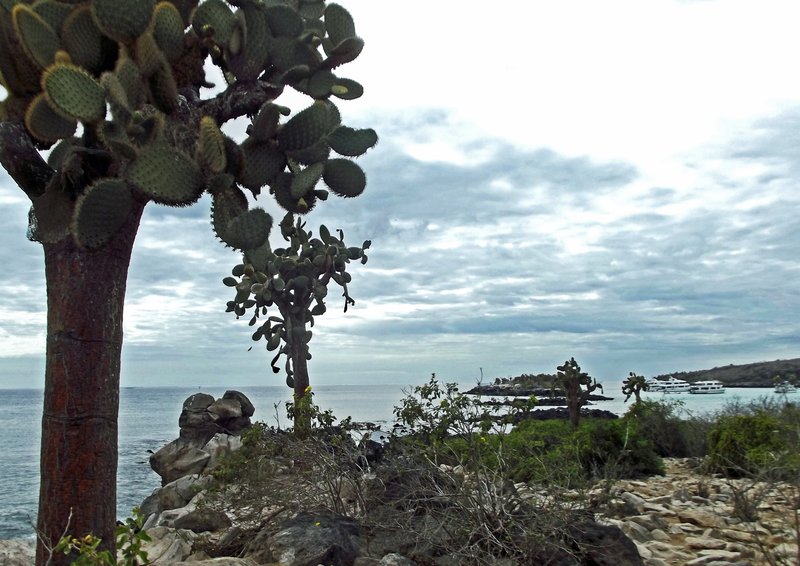 View of the bay from the trail

Known also by the English name of Barrington, Santa Fe is one of the smaller islands at just 24 km square, and has a single visitor site with a wet landing. Unlike many of the other islands, it is relatively flat, having been formed by an uplift of land rather than a volcanic eruption, about four million years ago.

We arrived here after an overnight voyage from far-flung Española and anchored off the sands of Barrington Bay. This is the only visitor site on Santa Fe, and is considered one of the most beautiful coves in the Galápagos, with its white sand and turquoise waters sheltered by a line of rocks and islets offshore. The Angelito, like all the cruise boats that visit here, anchored some distance off shore because of that line of rocks, and the panga ride in was a lovely one.

Fabian on the beach

We made a wet landing on the beach, and had to be careful as we arrived, as the Galápagos sea lion colony here was patrolled by a large and noisy bull. We gave him a wide berth as we waded ashore, walked up the sand and sat on a convenient rock to dry off our feet and slip into the trainers that are recommended for the trail here. I was later to see him a rather closer distance when snorkelling in the bay, and it was clear that he had been in more than a few fights!

Once we had all dried off, and put on trainers if we hadn’t landed in sandals, we turned our attention to the activity on the beach. We had landed early, at around 7.00 am, well before those from either of the other two boats moored in the bay, so had the beach to ourselves. As usual we were immediately drawn to the various Galápagos sea lions relaxing on the sand. The noisy bull who had taken such an interest in our arrival was now guarding his harem from just off-shore.

We soon spotted one female who was further up the beach, almost among the salt bushes that line the beach. Moving closer we saw that she had a new-born sea lion pup; she was still blooded from the birth and the placenta was lying on the sand nearby. 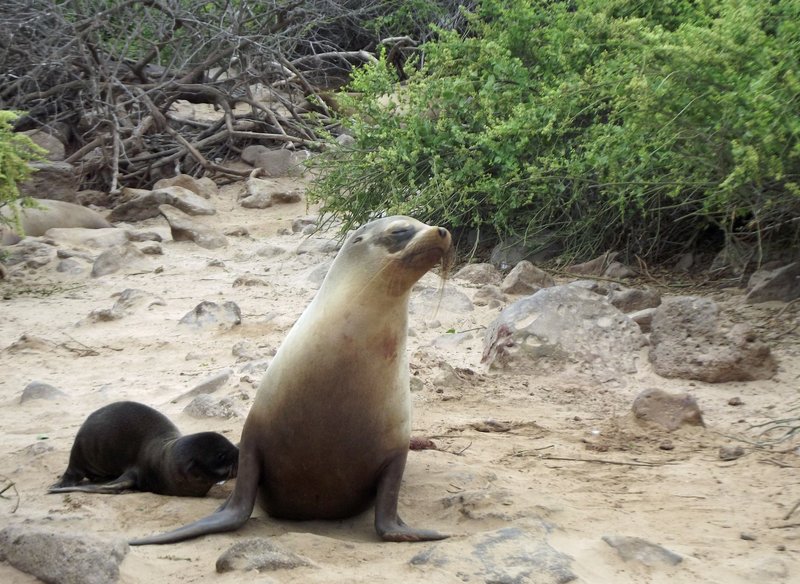 As we watched, we spotted a couple of juvenile Galápagos hawks circling the area and landing in the nearby trees, and more soon arrived. They sat there for a while, eyeing up this “treat”, and perhaps each waiting for another to make a move, or for the mother to be sufficiently distracted. Eventually one of the hawks dived in to grab the placenta, and they were soon all fighting over it, devouring it with great relish. 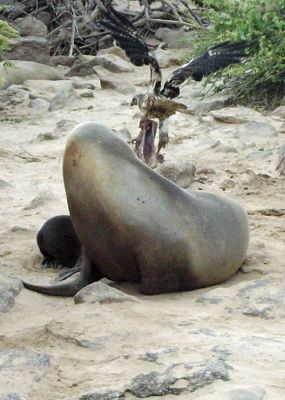 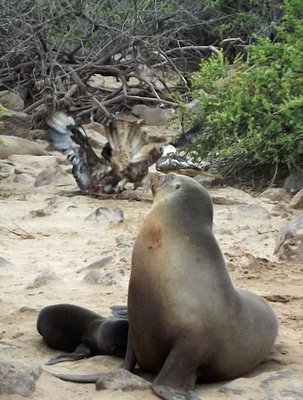 Snatching, and fighting over, the placenta

I was able to get a short video of all the commotion, and to get some good action shots using the motor drive on my camera – luckily it was running at the critical moment when one snatched the 'treat'. Once the meal was over they retreated to the trees, presumably to rest and digest, and we were able to get very close for more photos, even capturing the blood that still lingered on their hooked beaks. They seemed totally unfazed by their human audience, even seeming to pose for photos with us. Definitely one of my most memorable Galápagos experiences! 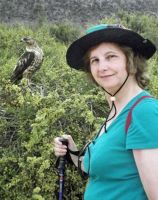 Posing with a hawk!

The Galápagos hawk is the only hawk to be found here and is endemic. It is found throughout the archipelago but not in great numbers, and is considered under threat. One estimate puts the current population of mating pairs as low as 150. The adults are a dark brownish black, with darker heads and paler tails and under-wings. They have brown eyes, grey beaks, and yellow legs and feet. The juveniles are a mottled brown, which becomes darker as they grow older. This mottled effect gives them excellent camouflage when small and vulnerable. 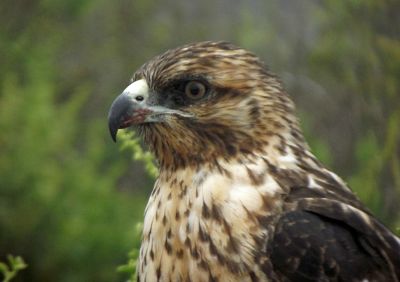 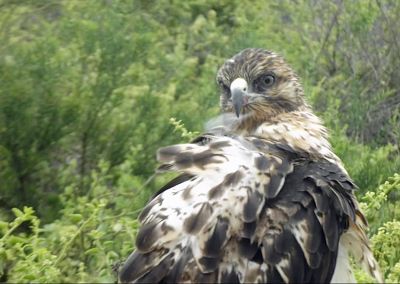 After this, our short walk through the opuntia forest, though pleasant and interesting, was perhaps always going to be something of an anti-climax, but nevertheless we went in search of land iguanas. 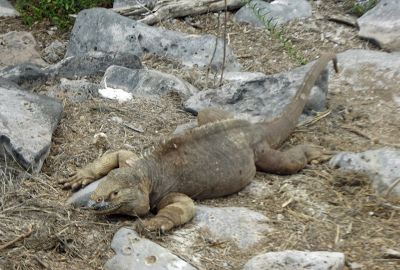 From the small beach we took the short loop trail through the opuntia forest on the headland to the north, overlooking beach and bay. This trail is just 800 metres long and rated easy/moderate; it was a relaxing walk after our longer hike on Española the previous afternoon. 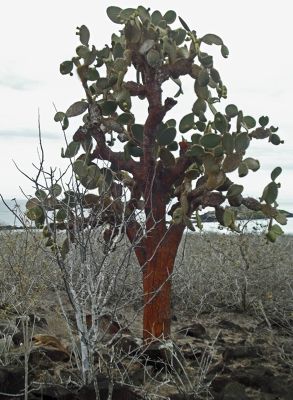 Santa Fe is known for its own endemic species of land iguana, which is larger than those found on the other islands in the archipelago. They are also paler than elsewhere, being beige or milk chocolate in colour, and have more pronounced spines along the back. It is not clear how this species of iguana has evolved, but there are apparently fears that it may be slowly dying out, as it is becoming rarer and rarer to spot a Santa Fe land iguana these days. I read on one website, which seemed to be targeted at naturalist guides rather than visitors, “Warn your tourists that they might not see any”. Fabian didn’t give us any such warning however, and maybe he knew what he was doing, as we certainly did see some, though not as many as on some other islands.

The trail winds through the extensive opuntia forest, which has the tallest trees in the archipelago, up to ten metres tall. This is not a coincidence – if the land iguanas are larger, the trees must grow taller to keep their fruit out of reach. And 'gigantism', as it is known, is a well-known feature of remote oceanic islands such as these, most usually attributed to the lack of large mammalian predators. These huge cacti certainly make for a dramatic landscape here, with the sea glimpsed between and below them, and the occasional land iguana dozing or eating the prickly pears at the feet of their sturdy trunks.

The second part of our morning here was devoted to snorkelling. I had been in two minds whether to join the group, as I was finding getting into the panga afterwards a bit of a challenge, and there was no option here to swim to the beach. But I decided to join the party, and it proved to be a great decision!

We were joined in our swim by a group of Galápagos sea lions, the females happy to play with us while the watchful alpha male who patrolled among them tolerated our intrusion but disdained to join the fun. They stayed with us for a long while, and I was really pleased to be able to capture some of their antics on my waterproof camera, both on video , and these stills, just before its battery ran out! The sea lions seemed almost to know what I was doing, as they repeatedly swam towards me, peered at the lens and flipped gracefully away again. I was so happy to be able to capture these images of what was to be our last snorkelling session in the Galápagos – a fantastic one to end with! 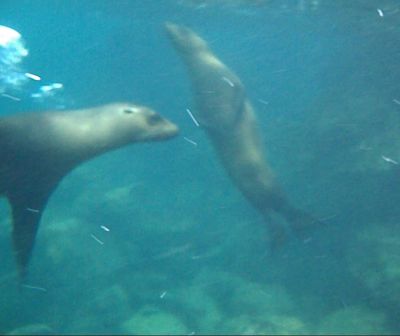 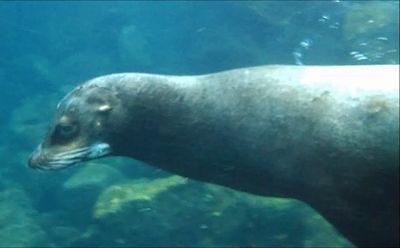 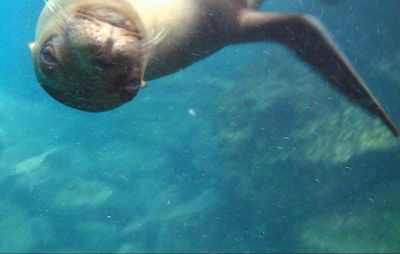 Snorkelling with the sea lions off Santa Fe

Once we were all back on the Angelito enjoying our customary post-snorkelling snack, she set off towards the little Plaza islands (Norte and Sur) off the east coast of Santa Cruz, where we moored just before lunch …

What a great photo of you and the hawk. That is a treasure.

Thanks Sally :-) I had this as my profile photo on VT for a while!