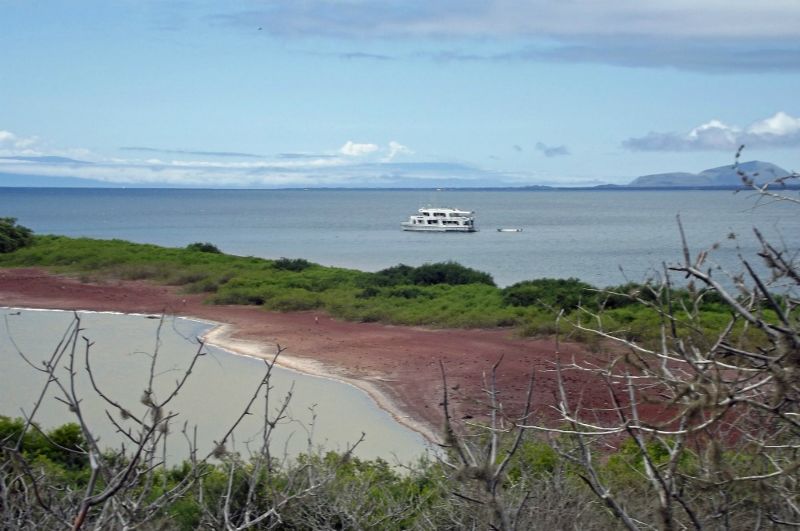 The Angelito moored off Rabida

Rabida lies immediately south of Santiago, and we came here directly from James Bay where we had spent the morning, arriving in time for an early lunch with a backdrop of this striking red island.

There is just one visitor site here and a visit here begins with a wet landing on the island’s only beach. We had seen white coral beaches, yellow sand and black lava ones, and now here on Rabida (also known as Jervis) we found ourselves on a dramatically red one, surrounded by equally red cliffs. The colour is the result of a lot of ferric oxide in the lava that has been emitted from the spatter cones that form much of the island.

As usual there was a welcoming committee of Galápagos sea lions, but I think maybe they too had just had lunch, as they were pretty sleepy and uninterested in the two-legged visitors disembarking from the pangas nearby! But they made great foreground interest for our first photos here. We also saw some shore birds such as oyster-catchers, and there were frigatebirds wheeling overhead 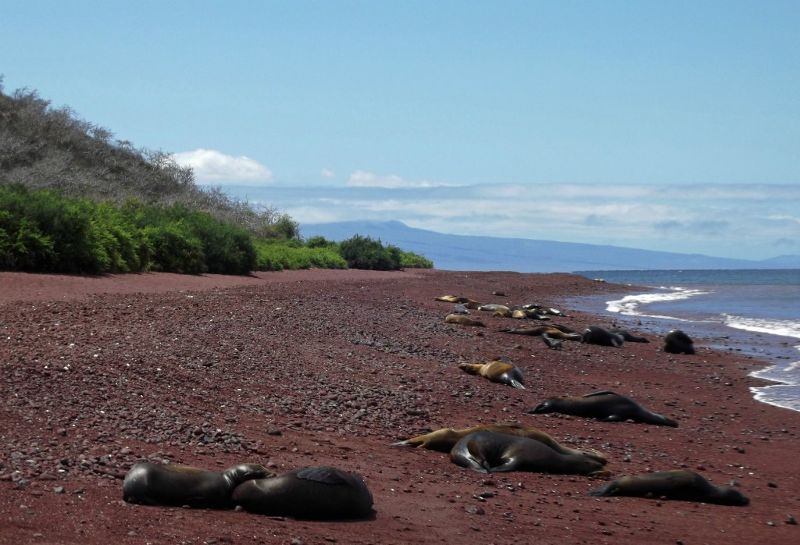 The red sands of Rabida 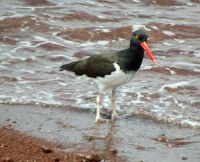 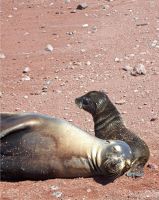 The red trail through the
palo santo trees

This was the one day when I chose to wear sandals for the wet landing, rather than wade ashore bare-footed and dry off on the beach before putting on socks and trainers. This was partly because Fabian had recommended sandals rather than his usual “tennis shoes” (I think the red sand here is a little grittier and less comfortable than the soft white sand in many other places), and partly because I had carried them all this way and I was determined to wear them at least once! But it proved to be a slight mistake – the grit of the beach continued for much of the path and found its way easily inside the sandals, and in addition, being unused to wearing them, I had forgotten to put suntan lotion on my feet and they reddened rather in the bright sun we had for part of our walk.

After spending a little time on the beach, photographing the sea lions against the strikingly coloured backdrop, we followed a path through the pale palo santo trees. The trail here is just one km in length, and is rated easy / moderate, as it involves a little bit of climbing but is generally easy going with a red gravel-type surface.

The redness of the soil and rocks here is due to the very porous lava, which has combined with rain, salt water and sea breeze to act as an oxidising agent. It makes for a great colour scheme, offsetting the dusty grey-green of the palo santo and opuntia that form the main vegetation. The former in particular looked stark and almost dead, as it was the dry season – in the wet they would be covered with green leaves. These are plants of the arid zone, and we saw another typical one of these, cordia lutea or yellow cordia, which added some bright colour to the landscape. 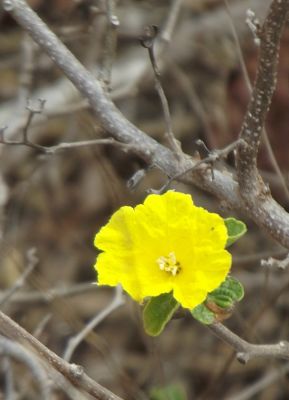 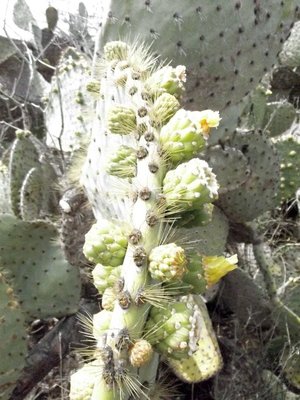 An aside on vegetation, which in the Galápagos is usually divided into three zones: coastal (mangroves of various kinds, saltbush, beach morning glory and Galápagos carpet weed or sesuvium); arid (assorted cacti, including opuntia, lava cactus and candelabra, palo santo, palo verde, poison apple or manzanillo, alternanthera); and humid, found only on the larger islands.

View from the cliffs

The path led us at first to a point on the cliffs immediately above the beach, from where we had a good view of the lagoon that lies just behind it, the red sands, the bay and the Angelito moored just off shore (the photo at the top of this page was taken at this spot).

The colours and the views are the main attraction here, as there are fewer wildlife species than on some other islands. This is due in part to the introduction in the 1970s of goats, which probably led to the extinction of several native creatures including geckos, land iguanas, and rice rats.

The goats were eradicated in 1971, reintroduced in 1975, and finally eradicated by 1977. Since then the island has remained goat-free, but there remains a problem with introduced Norway and Black Rats, which have negative impacts on both native vegetation and birds and reptiles. In January 2011 a rat eradication project was launched which hopes to clear Rabida of these and allow native plants and animals to thrive.

Despite this, there are the sea lions to be enjoyed, marine iguanas, and plenty of birds. On this part of the trail we saw several cactus and other Galápagos finches, pretty yellow warblers and a Galápagos dove.

From this high point the trail forms a loop, following the cliffs on the east side of the island. It led us next to another even more spectacular viewpoint on the cliffs where the contrasting colours of red rock, green opuntia , blue sky and turquoise sea made for great photo opportunities. In the distance was Santiago, where we had spent the morning (left-hand photo below). 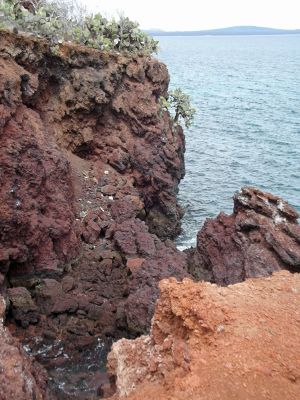 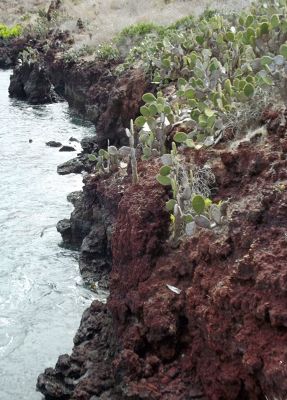 The red cliffs of Rabida 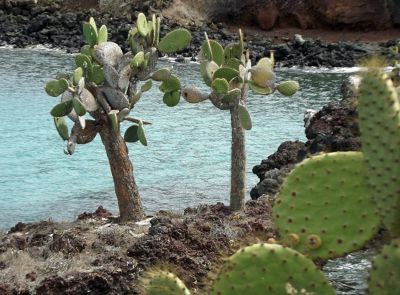 Opuntia growing on the cliffs

There were various sea birds fishing off the cliffs, including brown noddies skimming the waves and a few blue-footed boobies with their characteristic bullet dive. But as before, for the most part of our time here the scenery was the greater draw, with its dramatic colour contrasts and texture too – craggy rocks, spiny opuntia, liquid ever-moving sea.

We had already spent some time here, admiring the views and taking photos, when someone spotted what we thought at first might be a dolphin or shark, but which on closer inspection by Fabian proved to be a huge manta ray in the sea directly beneath us. I had seen rays before (in an aquarium!) and loved the graceful way in which they move. But I had never before seen a manta ray, the largest of the species. 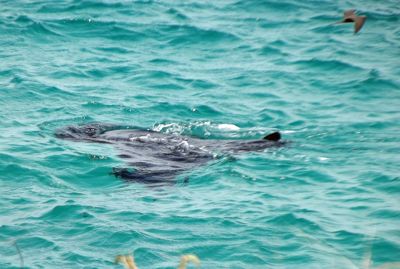 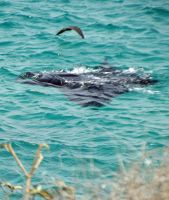 Manta rays can grow up to seven metres across, and when their triangular “wings” appear out of the water you might at first think a shark is swimming past, as we did, until you spot the large mass of its body just beneath the surface.

This one is likely to have been an oceanic manta ray, and as these can grow to seven metres wide, it is not surprising that he seemed really big even viewed from so high up on the cliffs above. He stayed for a long while, turning languidly in the waves. He was patrolling up and down the coast and I imagine looking for food there. Many rays are bottom feeders but others filter plankton from sea water passing through their mouths and out of their gills as they swim, and it seemed that “our” manta ray was probably doing this. We watched as he moved slowly along, from time to time lifting a giant “wing” above the surface. Watching this huge fish drift past below us here was a special experience and it was hard to tear ourselves away (not for the first time on this trip) but eventually he left, and so did we.

We followed the loop trail away from here and back down to the beach to visit the saltwater lagoon, which lies behind some of the mangrove trees that line the red sands. In the past this has been home to flamingos, but none were to be seen on our visit, and Fabian explained that it was likely that they’d been driven away by the groups of bachelor Galápagos sea lions who have chosen this spot as a place to chill out, undisturbed by the alpha male who throws his weight around on the beach. With each group of females presided over by a single male in this way, there are always plenty of bachelors who are unwelcome in the main colony and who need to find their own space. Maybe after some R & R here they will feel ready to fight for the right to rule a beach themselves. 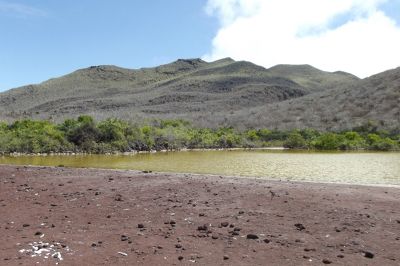 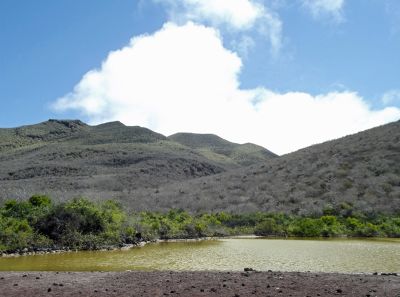 Meanwhile I can see why they favour this peaceful spot. The lagoon is surrounded by more mangroves, a bright green line below the grey-green of the palo santo trees, and has enough water for a leisurely swim to cool off in the midday sun, while the sea is only a short distance away when they feel the need to do some serious fishing for food. All the same, it is a little disappointing for us as visitors that they have caused the flamingos to leave.

We had hoped to have time for swimming or snorkelling here, but time was getting on and the Angelito had to sail that afternoon for Santa Cruz, so we said goodbye to the red cliffs of Rabida and headed for our next island. As we left we were treated to an amazing sunset. 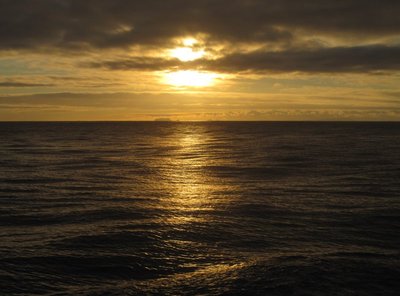 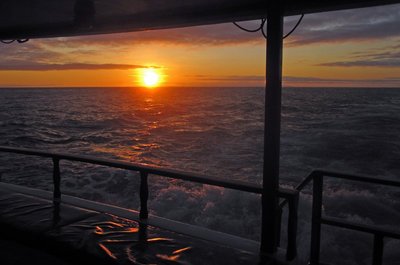 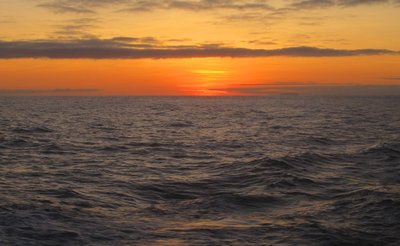 Tomorrow we were in for a change, visiting one of the few inhabited islands in the archipelago, Santa Cruz …

So beautiful. Have you seen the latest National Geographic magazine? There is a nice article about the Galapagos.

Thanks Sally, I'll look out for that

And a gorgeous sunset to finish off!
Hugs xx

Thanks Ann. This wasn't my favourite of the Galapagos islands we visited but still special in its way :-)