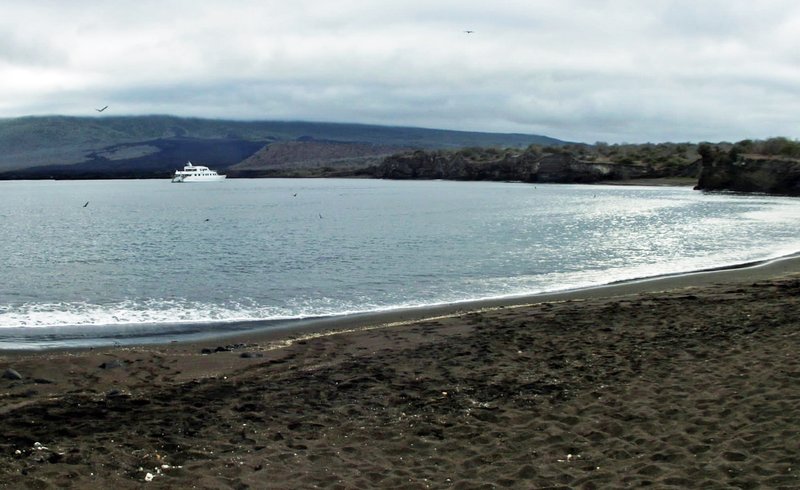 The Angelito in James Bay

After an all night voyage from Genovesa we were back among the main group of islands, moored off one of the larger ones, Santiago (also known as San Salvador). We had been here a few days ago, snorkelling in the waters of Sullivan Bay on its south-east coast and exploring the shoreline in our pangas. Now we were in James Bay on the north-west side of the island, and for the first time would be landing on its black volcanic sands.

Of all the uninhabited islands in the Galápagos, Santiago (or San Salvador or James) is the one most affected by man’s ability to destroy nature. A combination of early 20th century salt mining, a brief attempt at colonisation and the introduction of several species (goats, pigs, donkeys, rats, and mice) has meant that Santiago’s wildlife and vegetation has in the past been severely compromised. But that is no reason not to visit.

In recent years, a programme of eradication has removed the goats, pigs and donkeys; the Charles Darwin Centre’s breeding programme has revived the giant tortoise population; and the vegetation is gradually being restored. But even without this good news, Santiago would still be worth visiting, I think, for the drama of its relatively young (just over 100 years) lava flows – in fact, this was to prove (somewhat unexpectedly) to be one of my favourites among the islands we visited. 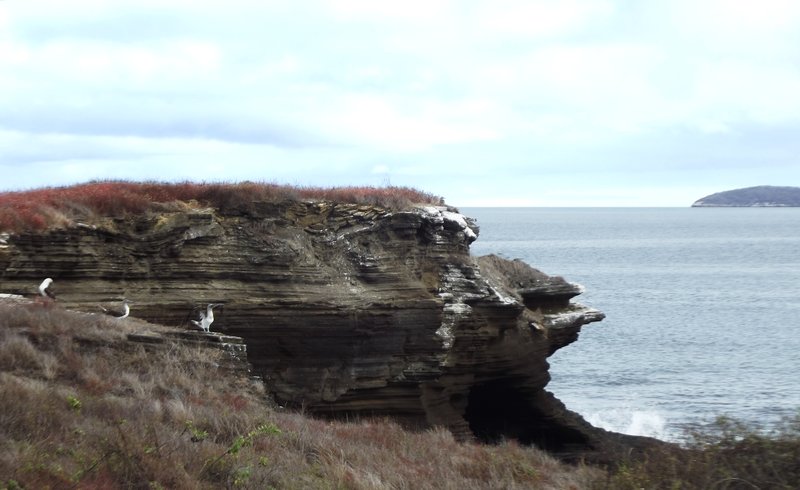 Near the landing place at Puerto Egas

At the southern end of James Bay lies Puerto Egas, our landing place. The landing here is a wet one, on to a volcanic black sand beach. One thing that struck me during our week in the Galápagos was the variety in the colour of the islands’ beaches – black here on Santiago, white on many others (e.g. Española, North Seymour and Sombrero Chino), yellow on Bartolomé, and even red on Rabida. Fabian explained that the dark colours, as here, soak up the sun’s heat and can become uncomfortable for the sea lions and other animals on a hot day, whereas the white beaches of many of the islands stay cool because they reflect the sun’s rays rather than absorbing them. When it is hot, therefore, you will see more sea lions on a white beach than on a black one.

However, we were here pretty early, at about 6.30 AM, and heat wasn’t a problem, so we were met as so often by a small welcoming committee of Galápagos sea lions. There were also a few blue-footed boobies on the low cliffs alongside the beach, some oyster-catchers and other sea birds.

We had brought snorkelling gear ashore, ready for a swim later, and we piled this up in a spot at the edge of the beach – no need to worry about leaving belongings here! Fabian pointed out the nearby manzanillo, also known as the "poison apple" tree. This is the only indigenous toxic plant in the islands. Touching the sap causes dermatitis, and eating the fruit can be lethal to humans, although giant tortoises can eat it and enjoy it. We were careful not to get too close!

We didn’t spend long on the beach and soon headed off on the trail. There are two possible trails here. One leads inland to the old salt mine workings, but we took the second, which leads along the coast to the area known for its dramatic rock formations and tide pools. This is a fairly easy two km walk, at first among opuntia (prickly pear) cacti. There were other more colourful plants too – the beach morning glory twined across the ground, and bright red splashes of altenanthera dotted the landscape, which here features brown layered tuff stone and black basalt volcanic rock that creates some weird and wonderful formations.

One of the most exciting sightings along this part of the trail was our first glimpse of a Galápagos hawk. We were to see more, and see them much more closely, later in the week, but for now this seemed pretty special! 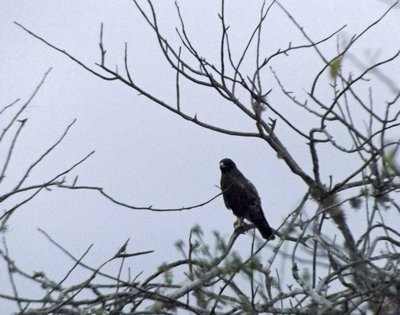 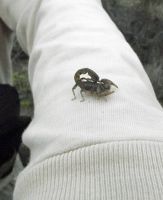 Another interesting sight was the scorpion that Fabian uncovered from beneath a small rock. He clearly knew exactly where to look as he only tried three rocks before finding one. And he “bravely” picked it up and put it on his sleeve so we could all get a close look and a photo or two! This is I believe the endemic Galápagos scorpion sub-species, which is despite its sting a favourite food of the lava lizards.

After a while the trail brought us to an area of lava rock formations. This bizarre landscape of twisted black lava and hidden rock pools was one of my favourite sites in all the islands we visited. 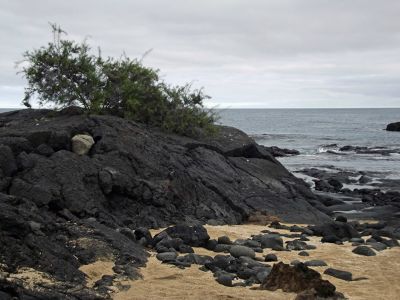 The rocky shore of Santiago

Much of the lava here is in the formation known as “pahoehoe”. This has an undulating, or ropy surface, caused by the movement of very fluid lava under a congealing surface crust. Unlike the “a’a” lava found elsewhere on the islands (and indeed elsewhere in Santiago), which is loose and broken, pahoehoe makes for interesting photos and a relatively smooth walking surface. Here at Puerto Egas it has created a series of pools and grottoes spanned by volcanic bridges, just like a fantastical black garden. 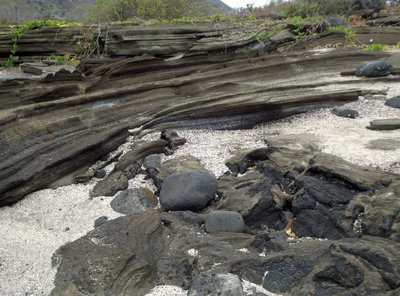 This area is sometimes referred to as the “fur seal grottos” but we didn’t see any of these relatively elusive creatures here. But there was more than enough to keep us occupied for some time. In one of the pools three Galápagos sea lions were playfully enjoying the in-rushing sea water. 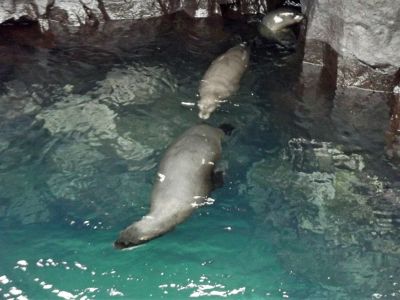 Sea lions in a pool

There were lots of marine iguanas posing for our cameras too. As well as still photos, I took some videos, and was really happy that on one of these I was able to capture their curious habit of snorting out excess sea-water ingested as they feed underwater. They do this to deal with the excess amount of salt taken in, which is filtered out of the water through large glands in their noses before being disposed of in this manner.

This was the first place where we observed this behaviour closely, and also the first where we saw quite so many of these fascinating (to me anyway) creatures. They congregate in great numbers in places on the islands, and are quite happy to pile on top of each other for warmth and security. Sitting on the jagged-edged rocks of this other-world landscape, eye-balling a marine iguana, must be one of the quintessential Galápagos experiences. 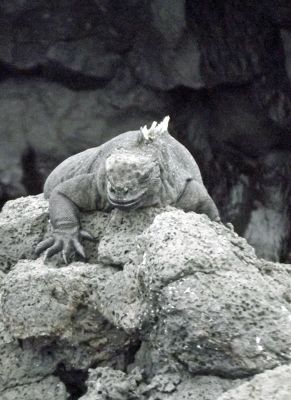 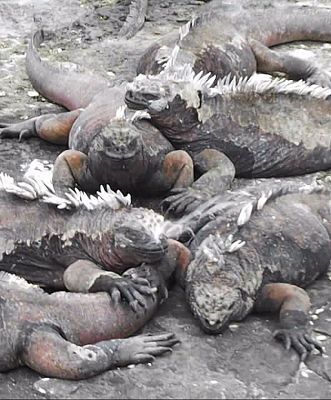 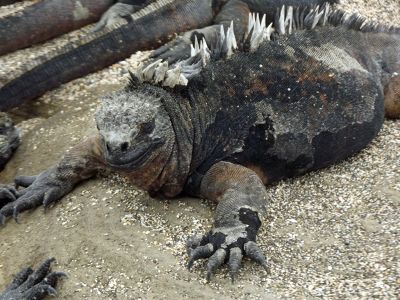 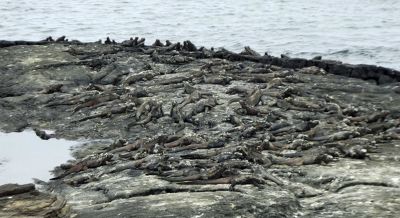 I also made a short video of a sea lion pup here, making his way over the rocks to the sea. There were lots of brightly-coloured Sally Lightfoot crabs standing out clearly against the dark rocks, as did a pretty (but too lively to photograph) yellow warbler. We also saw several oyster-catchers and other shore birds such as whimbrels and turnstones. 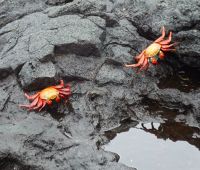 I would happily have stayed here even longer than we did, but a snorkelling session needed to be fitted in before lunch, so we eventually tore ourselves away and headed back along the trail the way we had come. 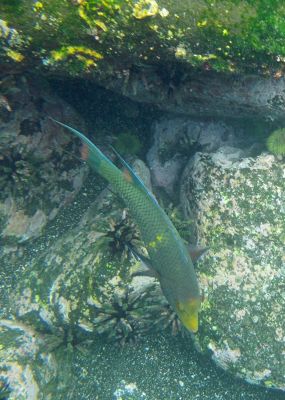 Our snorkelling here was directly from the beach at Puerto Egas. We had brought all our gear when we landed first thing in the morning for our walk on the trail to the fur seal grottos, and worn swimwear under our shorts etc., so it didn’t take too long for us to pull on the wetsuits, flippers and masks/snorkels. Swimming from the beach meant we could all do our own thing and go at our own pace, though Fabian made some recommendations about good areas to check out. I headed for some rocks to the left of the beach, as did several others. On the way, I swam through a shoal of beautiful small silvery fish that sparkled in the sun that filtered down through the water.

When I reached the rocks, I found that they were green with algae and the sea floor strewn with rounded boulders, rather than the more jagged ones I had seen on the east coast in Sullivan Bay two days previously. Unfortunately, I swam here a little too slowly, or perhaps didn’t go close enough, to see some sea turtles that others in the group reported spotting there. But I was thrilled to get my first good look at a Galápagos sea lion underwater, as one female came right up to me and swam round me several times, although she didn’t stay to play as a group on Santa Fe did a few days later, and I was too excited to remember to take a photo of her! I also saw lots of fish around the rocks – damselfish, parrotfish, sea urchins and many that I couldn’t identify. It was a super end to our time on Santiago. 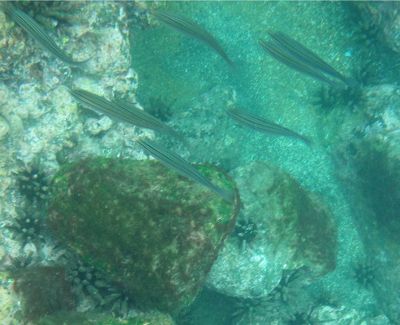 After snorkelling it was back to the Angelito. As soon as we were all on board she set off for our next island, Rabida …

And again thanks Ann. I loved it here!

Thank you Adam, much appreciated