It's all about the view 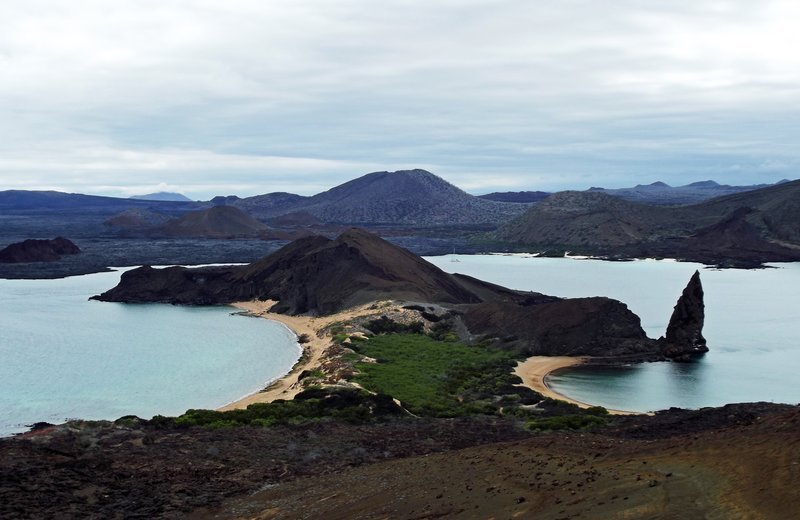 Bartolomé is the most visited and most photographed island in the Galapagos. It was one of the islands I had most wanted to include in our itinerary, as it is generally recognised as having the best views in the archipelago. This view from the top of its peak is the must-have shot.

This was the third island we visited on our Galápagos cruise on the Angelito. Despite being keen to include it on our itinerary, it proved not to be one of my very favourite islands, as a combination of a relative lack of wildlife with which to interact, and relatively dull weather which failed to bring out the perspectives of this striking landscape, meant that Bartolomé didn’t make my “top five” list after all. But that is not to say it isn’t well worth visiting – there are no bad destinations in the Galápagos!

View from the landing place 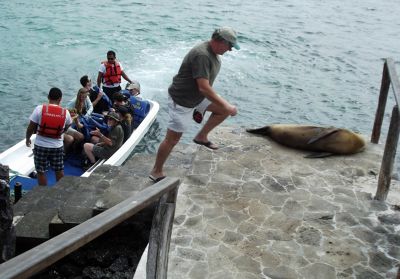 The landing here is a dry one, and as you can see in the photo, we had someone to meet us as we set foot on the island! This is Geoff trying not to step on any stray flippers ;-) The stone steps are very even and easy to walk on – I think they must be fairly new. 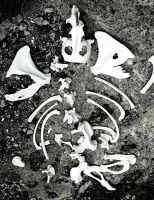 If you look at what’s going on in the panga you can see our usual dry landing routine – the boat would pull in close to the landing spot, we would take off our life jackets and pass them to the back of the boat, and a crew member or Fabian would be on hand at the bow to help us out – one at a time, from alternate sides of the boat for balance, and using the recommended secure grip which is easy to do but hard to describe! This is the second panga arriving (I was on the first) and as soon as all of us were on shore we started the climb to the summit.

But as we did so there was something interesting to distract us beside the path. Another guide had arranged the bones of a long-dead Galápagos sea lion in a rough approximation of their arrangement in life. The bleached white bones looked rather striking on the dark ground, and it also gave us an opportunity to see the shape of the skull, the broad strong shoulder blades, and some of the bones of the flippers.

Once we’d had a good look and Fabian had explained some details of the skeleton, we set off.

The trail to the summit 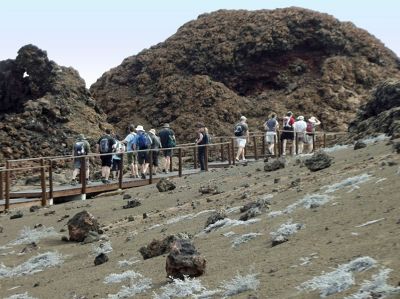 Our group on the trail

Bartolomé consists of an extinct volcano and a variety of red, orange, green, and glistening black volcanic formations. It is the slope of this volcano that you climb to reach the viewpoint. The trail across the desolate landscape (rated as moderate) is on a boardwalk, which protects the fragile lava. Fabian mentioned that there is talk of introducing boardwalks on other islands for the same reason – maybe eventually all of them. I can see that this would certainly help with the conservation of these special landscapes, and would have other benefits too, making it harder for contrary visitors to wander off the permitted path, and also making the going underfoot a little easier for the less able walkers. But I can’t help feeling that a proliferation of raised wooden paths would detract considerably from the appearance of the islands and the experience of exploring them.

Anyway, back to Bartolomé. The boardwalk here alternates between some fairly even steps, some more shallow ones, and a few stretches without any steps at all, where you get a chance to catch your breath and admire the view. There are also a couple of points where you can detour to a viewpoint to the side of the path. There are 375 steps altogether and as I had been having a few problems with my knee I found it a little hard going, although not too bad if I took my time. The main challenge was trying to use my hiking pole to take the weight off my knee, as it kept wedging in the slats of the boardwalk! I could avoid this if I watched where I was placing it, but that meant missing the views and the striking scenery. 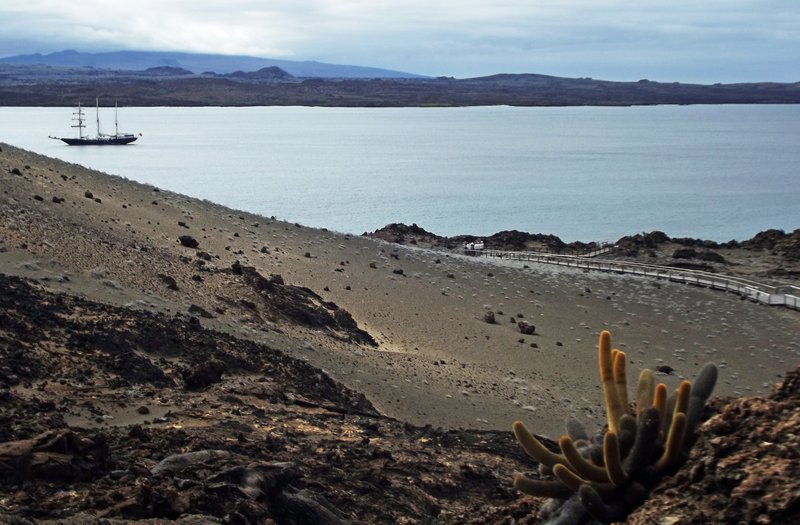 Looking back down the trail

The landscape around you as you climb is rather desolate, especially on a dull day such as when we visited. The black lava, crumbled on the lower slopes and piled into bizarre formations such as spatter and tuff cones and lava tubes higher up, is enlivened with plants of the few species that thrive in this environment. The most striking and prominent is the lava cactus, which is often the first plant to colonise landscapes scarred by volcanic eruptions. You will also see the pale leaves of the tiguilia dotted over the dark volcanic sand. Its leaves are covered with small grey hairs, which help prevent moisture evaporation and reflect sunlight. 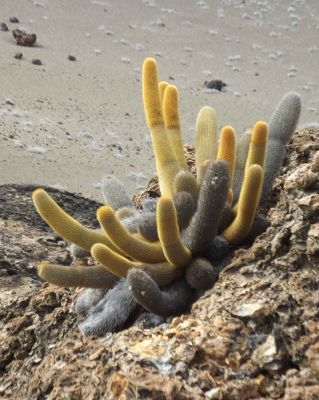 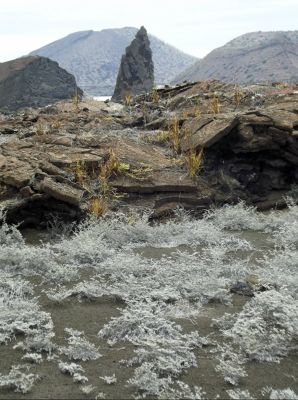 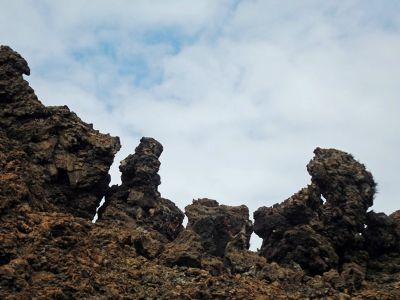 There are very few animals here. We did see some lava lizards enjoying the warmth of the rocks, or even of the boards, and of course there were birds overhead, but not the proliferation of wildlife we had become accustomed to already on the other islands. The main point of this visit is not the walk and the wildlife, it’s the destination at the end of the trail. 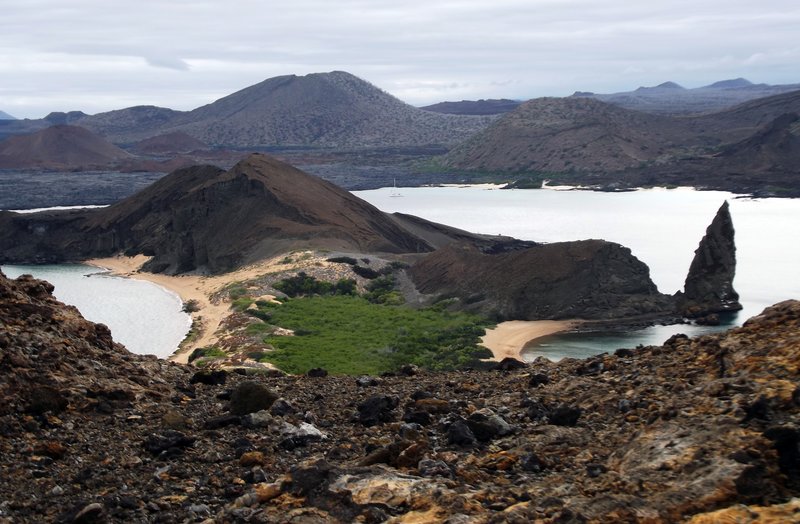 Bartolomé is 168 metres high, but the trail stops a little below this, at 115 metres. – although I am not sure if this is the height at the point where the boardwalk steps run out, or at the top of the stony slope that you can walk up to get a little higher. 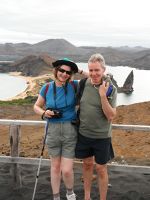 Whatever the exact height, from this point you can see Pinnacle Rock, Bartolomé’s “trademark”, immediately below you, and beyond it, nearby Santiago and the black lava flows at Sullivan Bay, beyond that Daphne Major and Minor, and in the channel between here and there, some other smaller islets and rocky outcrops. Further away Santa Cruz, Baltra, North Seymour and Rabida are all visible. The contrast of white sand beach, green scrub-land behind it, volcanic island and blue sea is dramatic and memorable. It looked great even on a dull day, and photos I have seen show that on a bright one it is spectacular. It’s not difficult to see why this is the most photographed spot in the Galápagos!

We spent some time here taking photos and relaxing after the climb. Fabian offered to do “couple photos” for each of us and also did some trick ones for some people, creating the illusion that they were leaning on Pinnacle Rock – very clever, but I prefer the straight-forward version. This is such a magnificent view it doesn’t need any gimmicks!

After a while though it was time to descend and return to the Angelito. There was more to do here for the second half of the afternoon, and a choice of activities .

View of Bartolomé from the Angelito

After we returned to the Angelito Fabian offered us a choice of relaxing on board, snorkelling around Pinnacle Rock, swimming or spending time on the small beach. We chose the latter, along with two others of our group, and he came along with us, as tourists aren’t allowed here (or on most other visitor sites) other than in the company of a guide.

Snorkellers, swimmers and beach-goers all climbed into the pangas and headed for a wet landing on the beach. On the way we made a brief detour to explore the rocks around Pinnacle Rock. This is the very dramatic lava formation that features on so many photos of the Galápagos Islands. It was formed when magma expelled from the volcano reached the sea. The cold water reacted with the molten rock and caused it to explode. Particles splattered down in the shape of cone often known as a tuff cone or cinder cone, and fused together to create this huge rock which is in fact made up of many layers of these lava particles. You can get an idea of its size from my photo below - look carefully near the bottom right and you will see the other panga close to the rock. 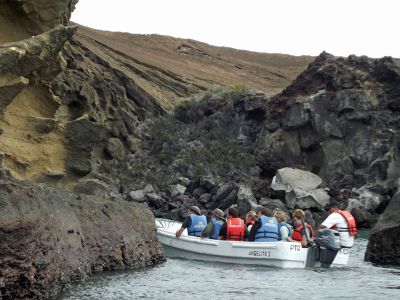 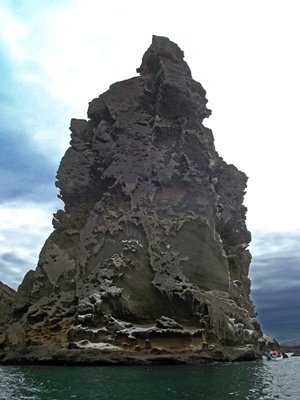 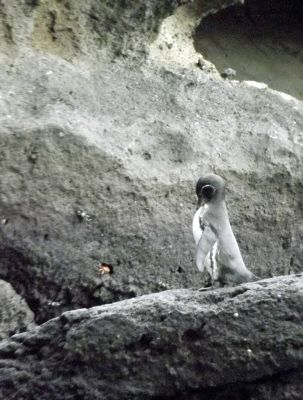 The rock was used as a target for US airmen during World War II. More recently it has featured in the 2003 film, “Master and Commander.” I haven’t seen the film, but it was clear from Fabian’s comments about it that they took some liberties with the geography of the islands, making it seem as if certain places were on the same island when in fact they are not – but that’s so often the case with film-makers! He offered to play the DVD for us one evening on board but we never got around to it, so I plan to look out for it so I can see it some time.

From the panga we were able to see a few of the Galápagos penguins that make their nests here, having established a small breeding colony in a cave behind the rock. There were also some Sally Lightfoot crabs, although not in the large numbers we saw on some other islands. 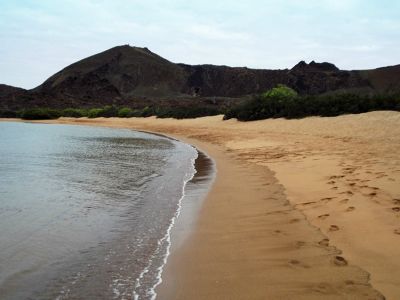 At the beach we waded ashore, and while some went off to snorkel or swim, we had an enjoyable and relaxing time spotting a number of bird species, including a Galápagos penguin that swam up and down, parallel to the beach, right opposite where we were sitting. Other sightings included a great blue heron, pelican, yellow warbler, and a booby diving repeatedly for fish in their distinctively direct fashion. There were also some sleepy Galápagos sea lions, although not as many as on some of the other beaches we visited. 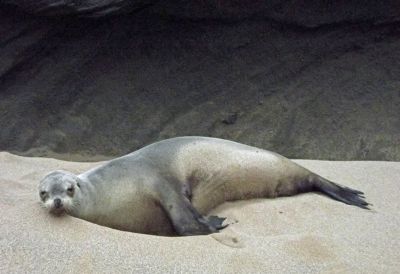 Relaxing on the beach

Much of the time though we simply relaxed and chatted to Fabian and the others, and enjoyed the views of nearby Pinnacle Rock, before heading back to the Angelito for another great dinner and cosy evening on board.

Despite the overcast weather and less animals you have portrayed the island beautifully.