Getting to know Quito 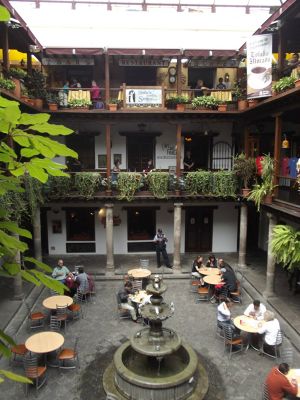 After our morning spent exploring the Compania church, Plaza San Francisco and Plaza de la Independencia (see previous entry) we decided to search out a light lunch. I knew from my research and tips from friends on Virtual Tourist (thanks Malena!) that there were a number of cafés and restaurants in the Palacio Arzobispal (Archbishop’s Palace) on the opposite side of the Plaza de la Independencia, so we decided to check these out.

The Archbishop's Palace is a two-story whitewashed building built in neoclassical style, with a colonnaded passage facing the plaza. Inside are a number of courtyards, around one of which are several restaurants (both fast food and smarter) and souvenir shops – also, conveniently, a good clean public loo!

It was built in the 17th century at a time when the Catholic Church was as powerful and important as the ruling Spanish government, if not more so. It remained the seat of power of the archbishops of Quito for centuries, undergoing various modifications as needed to preserve or improve the building. Its current restored appearance dates back to 2002 when the structure was strengthened and the courtyard given over to today’s commercial activity. 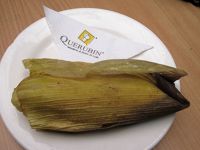 For lunch on this first day we chose the casual eatery Querubin, located on the ground floor of the Archbishop’s Palace. The space inside was quite small and full so we asked if we could eat at one of the tables outside in the courtyard, not being sure which of the several nearby restaurants they belonged to, and were told that indeed we could. It seemed that the tables were common to all the ground floor restaurants in fact.

We were keen to get our first taste of local food, having arrived too late for dinner the previous night. Chris chose a chicken empanada (a single large pastry rather than the more usual little ones) and I decided to try the humita. Humitas consist of fresh ground corn mixed with egg, sometimes cheese and other flavourings, wrapped in corn husks and steamed. They can be savoury or sweet. This one was savoury but was rather disappointing – so bland in flavour that I could only enjoy eating it once I had covered the corn with generous dollops of the chilli sauce known as aji. As we were eating outside I had to go into the restaurant to ask for the latter – normally it is placed on every table in just about any restaurant in Ecuador. My choice of drink was more successful however – a delicious glass of mora juice. I also had a single espresso after my meal (more caffeine needed!), and Chris had a coke. 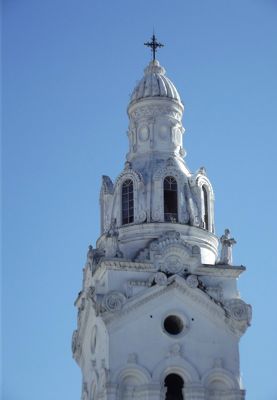 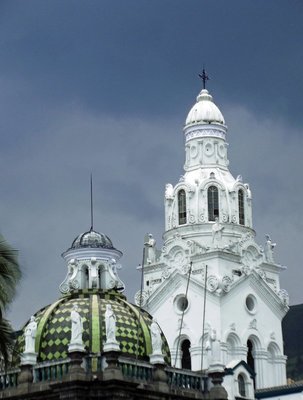 
After lunch we decided to pay a visit to the cathedral. Easier said than done, at first, as while there appears to be an entrance from the Plaza de la Independencia, and indeed one from Moreno, in fact you enter through an unprepossessing doorway on Venezuela, which is almost lost in a row of small shops, so it took us a while to find. Admission to the cathedral cost us $1.50 (remember, these are October 2012 prices) and I found it very interesting if less ornate than I had been expecting – but isn’t that quite often the case with cathedrals? 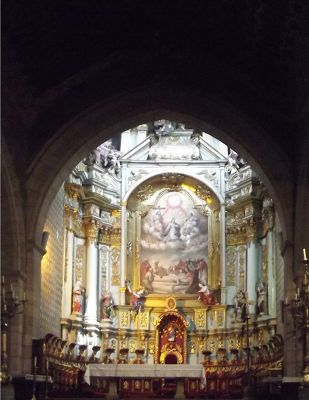 This was the first cathedral to be erected in South America, between 1550 and 1562, although it has been since restored several times owing to earthquake damage. It is today a fascinating mix of 16th century colonial Spanish design and local native influences. As an example of the latter, on the wall to the right of the altar there is a painting of the Last Supper with dishes that include cuy (roast guinea pig) and humitas (fresh ground corn mixed with egg, sometimes cheese and other flavourings, wrapped in corn husks and steamed) – it’s unlikely that either of these would have been on the menu in 30 AD Jerusalem!

On the whole, the interior is as I’ve said less flamboyant than some of the other smaller churches in the city, but no less interesting for that. As well as the painting mentioned above, I was taken by the hammered-relief silver doors of the rear chapel, through which we had entered, and the beautiful wooden ceiling which dates back to the turn of the 19th century. I also liked the dramatic altarpiece in sky blue picked out with lots of gold – as the most ornate piece of decoration in the cathedral it really draws the eye forwards to the altar, as it is of course intended to do. No photography is allowed inside, as seemed (frustratingly) to be the norm in Quito, but I have to confess that I did sneak one of this altar, without using flash, obviously.

The cathedral has seen its share of bloodshed. A bishop of Quito, José Ignacio Checa y Barba, was murdered here during the Good Friday mass in March 1877, poisoned with strychnine dissolved in the consecrated wine. Only two years earlier, in 1875, the Ecuadorian president Gabriel García Moreno was attacked with a machete outside the cathedral and was brought inside – a plaque behind the altar marks the spot where he died. His is one of several notable tombs in the cathedral, and another is that of Mariscal Sucre, one of Ecuador’s heroes of independence. You will recognise both these names as they are commemorated in nearby streets – Moreno runs just behind the cathedral and intersects with Avenida José de Sucre just a block away.

Leaving the cathedral, we decided to complete the fourth side of the rectangular route we had been following from our hotel. The historical heart of Quito (and indeed much of the rest of the central part) is laid out in the square city blocks typical of colonial Spanish towns, making navigation easy. We attempted to visit the attractive church of San Agustin on the corner of Guayaquil and Chile, one block southeast of the Plaza de la Independencia, but found it closed – that would have to wait till another day. But nearby I knew was a café named for the church, the Heladaria San Agustin, which specialises in a traditional local treat, which just had to be tried – Helado de Paila. This is a particular sort of ice cream made in the north of Ecuador. It is made not through churning, as is usual, but instead prepared in a wide metal pan (a bit like a wok) which the ice cream maker spins on a bed of ice. The fruit juice, with I think just a little cream added, freezes in the pan through the contact with this ice. The result should be a thick creation somewhere between a sorbet and ice cream.

We found a table in the café, which has a somewhat European style to it. The waiter helpfully brought us a plate of small taster spoonfuls so we could make our choice. These were mostly flavoured with various local fruits, many of them unknown to us on this, the first day of our trip. A bowl with two small scoops cost $2.00, so we decided to choose two flavours each. I was tempted by taxo, a type of passion-fruit, but in the end chose guanabana, which reminded me a little of lychees, and naranjilla, a green bitter orange that I found refreshing. Chris tried mora, the local blackberry-like fruit, and chocolate. He was disappointed with the latter, and indeed all the flavours seemed a little watery, which made me wonder why Helado de Paila is so celebrated (and indeed why this establishment is so highly rated). However the next day while out and about with our friends Betty and Marcello we stopped at a roadside heladeria in Nayon, where I had a much stronger flavoured and very refreshing cone of taxo flavoured Helado de Paila. So I don’t know if we had just caught this place on an off-day perhaps?

After our ice cream we realised that the long flight, time difference and maybe also the altitude were catching up with us, so we decided to go back to the hotel for a break and also to get to know our temporary home a little better than we’d been able to do when arriving so late the previous night. We spent a little time in the large communal lounge which has two computers for free internet access (there is also free wifi, though we found it patchy in the rooms), checking up on emails and social media, and then headed up to the roof terrace, up several flights of steep stairs, to check out the views which were great. 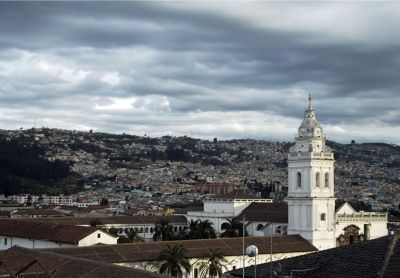 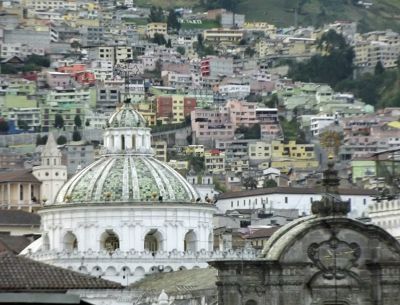 View of La Compania and beyond 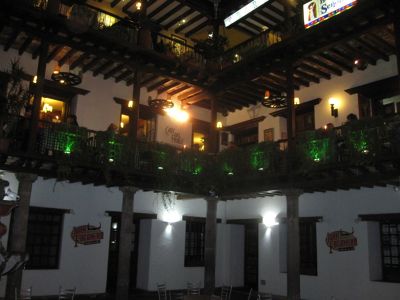 Palacio Arzobispal - the courtyard at night

Having seen the range of restaurants inside the Archbishop’s Palace when we were there in the morning of our first day in Quito, we returned in the evening to try one of the smarter ones. Our choice was the Café del Fraile on the first floor (second floor to US readers) balcony of the courtyard. There were a number of tables along the narrow balcony with good views over the courtyard below, but the evening was a little chilly so we opted for an inside one. The décor here was quite interesting, with some old paintings on the walls, antique instruments etc. Service was a little slow perhaps, but not really a problem as we had all evening. 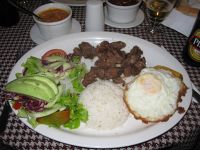 We were brought bread and a tasty chilli sauce, aji, with the two beers we’d ordered and decided that was sufficient as starters. For my main course I chose a dish called tortillon which consisted of pieces of well-flavoured steak (which I think had been marinated in something but I’m not sure what) served with boiled rice, llapingachos (potato patties with a melted cheese centre – these became one of my favourite Ecuadorean treats), fried egg, avocado and salad. The rice was a little dull but the rest of the food very good. Chris had a “Sandwiche Fraile” with ham and cheese, which was served with fries. At the time we couldn’t judge as this was the first main meal we had in Ecuador, but on reflection I think it was one of the better ones we had in Quito (although we had even better food elsewhere perhaps).

We walked back to the hotel along the quiet streets (the colonial city is not the part to come to for boisterous night-life), very happy with our first day in this likeable city. 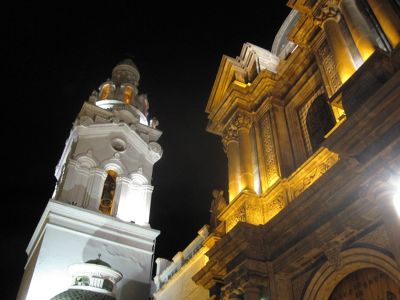 Cathedral and El Sagrario at night

Tomorrow we would meet up with a local couple, parents of a London friend, to explore further afield …

Think I'll look for a roadside stand for my Helado de Paila . . . which is a definite must-have. Quito sounds delightful.

Thank you both for dropping by. Yes, a roadside place should be good Sally, or the sort of informal cafe where we went

Like the Cathedral shots. Also enjoying your foodie tips

Something we really love when on holiday!
xx

Thanks Ann - yes, I always like to seek out good places to eat local food :-)

I have come across Last Supper pictures featuring cuy elsewhere in South America. I can't recall humitas - perhaps this is unique to Ecuador.

Yes, the cathedral in Cusco has a famous one with cuy but I've never come across humitas anywhere else