We take the golden road to Samarkand * 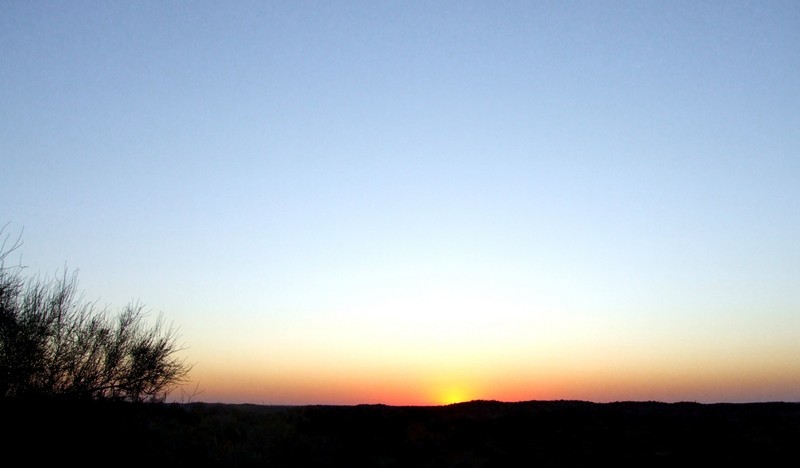 Today we were to travel to perhaps the most famed city of the Silk Road, Samarkand. Would it live up to expectations?

Morning in the yurt camp

The day certainly started on a high note. I had slept well at the desert camp at first, until the cool wind coming through the lattice frame of our yurt at about 4.30am woke me. I opened my eyes to see a thin but incredibly bright crescent moon hovering above the nearby sand dune. After dozing fitfully for some time, I decided, about an hour later, to give up and get up. Slipping into my shorts and reaching for my camera, I left my still-sleeping yurt-mates and stepped outside. I didn’t know what time the sun would rise but I figured it would be great to try to capture it on camera and much better than lying on the slightly hard ground trying unsuccessfully to sleep.

I had rather more of a wait than I had expected, but it was a lovely sensation to be, for a short while at least, the only person up in the camp. Gradually though a few others woke up and joined me outside, but still not so many that when the time for the sunrise came we couldn’t almost have a sand dune each to watch it from! Certainly I was alone on mine when the sun first climbed above the more distant dunes. 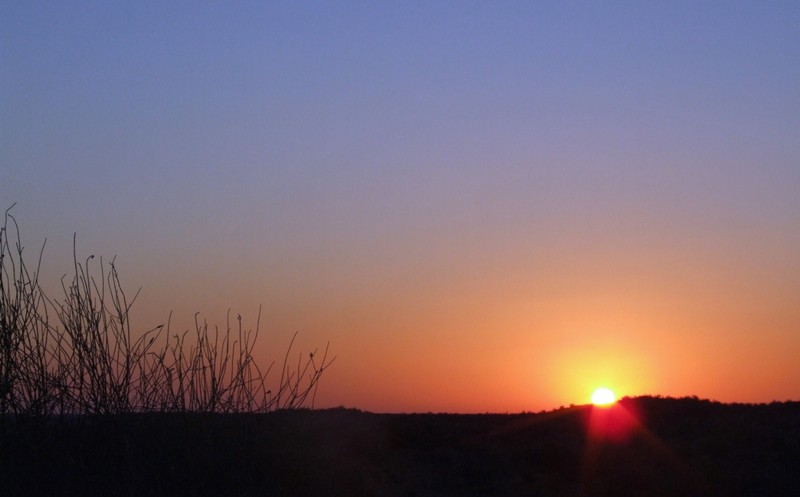 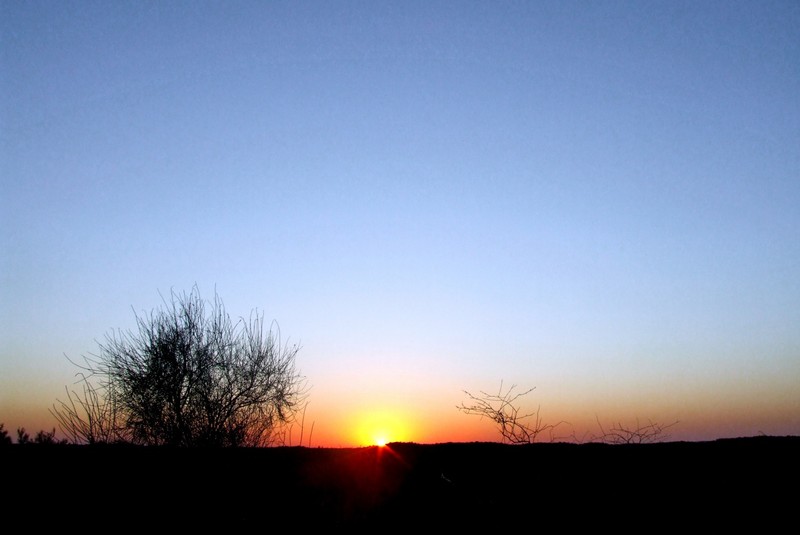 Soon after this I headed back down into the camp where more people were by now up and about. In fact my one tiny criticism of the camp would be that, with breakfast not served until 8.00, and so many of us up before 7.00, they didn’t think to provide a pot of tea at that time. Nevertheless, this was a wonderful time to be in the desert, with sun growing in strength and warmth every minute and the dunes glowing in the early morning light. 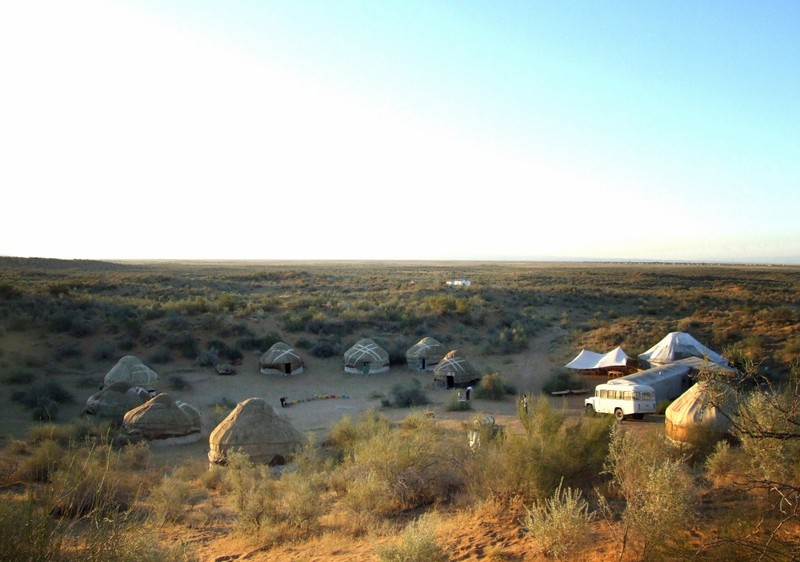 The camp from the dunes

And when breakfast was served it was very good: bread, pancakes, cheese, meat, jam and hard-boiled eggs, washed down with either green tea or decent (though instant) coffee. After this, and a short walk on the dunes with Chris, who had slept through the sunrise, it was time to leave the camp to the next visitors and head back to Yangikazgan to pick up our bus. 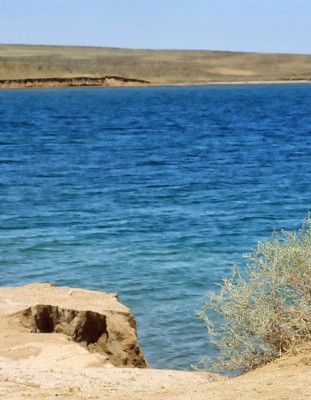 We didn’t drive immediately to Samarkand but instead made a detour to Lake Aidarkul, which seems to be standard practice on all these tours. Opinions in our group about this were rather mixed, with some of us enjoying the interlude in the intensive sightseeing, and others regretting that it gave us less time in Samarkand. I think it depended on whether you found something there to appeal to you. If like me and a few others you were keen to swim it was great, and if like Chris you fancied a walk and a chance to see the desert scenery from somewhere other than out of the bus window, it was also good. But this isn’t really a place to come to simply relax – there is no shade, and although an awning was set up for us to sit under, it was rather small and everyone was rather on top of each other. Those who wanted peace and quiet to read, write up their journal or just unwind would have found the chatter of the others distracting.

For me, the highlight of our visit to Aidurkal Lake was the opportunity it afforded for a swim. After several days travelling, and some involving long bus journeys through the hot desert, I was glad of the chance to relax in its cooling waters.

There were no bushes for privacy behind which to change, so those of us wanting to swim went off to change in the bus. The edge of the lake was a little stony, so I kept my flip-flops on, but we didn’t have to wade too far for it to be deep enough to swim, though the odd sand bank beneath the surface meant that I did find my toes scraping the ground again at intervals. There was also no shade at all, so I had to resist the temptation to stay in the water too long, however lovely and cooling it was.

Meanwhile Chris, who is not so keen a swimmer, chose to climb a small hill near where we had parked to get some photos of the lake from above. Aidarkul is man-made, created during water supply projects in the area in the early 1970s (resulting in the Sirdarya river overflowing from the Chardarinskaya Reservoir). It is over 200 km long and in some places as much as 15 km wide – enough that you can’t see the far side. The bay where we swam was fairly uninteresting to look at, apart from the pretty green rushes captured in Chris’s photo below, but elsewhere I’ve read that it attracts a lot of birds such as cormorants, pelicans and herons – I would have liked to have visited that part. It’s also well-stocked with fish, and indeed fishing is the main industry in this region, apart from (increasingly) tourism as more and more travellers choose to spend a night (or more) in one of these yurt camps as part of their Uzbekistan experience. 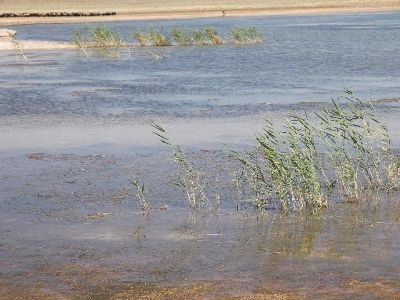 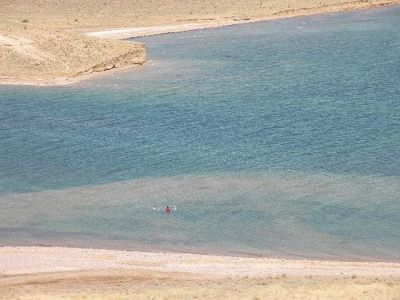 Photos taken by Chris from above the lake
- you can just make out the small group of swimmers, of whom I am one!

Our visit concluded with a picnic lunch that had been provided by the Kazaks at the yurt camp – salads, cold potatoes, bread, watermelon, with bottled water and green tea to drink. You can see how small our awning was in the photo below, as we all jostled for some shade in which to eat! 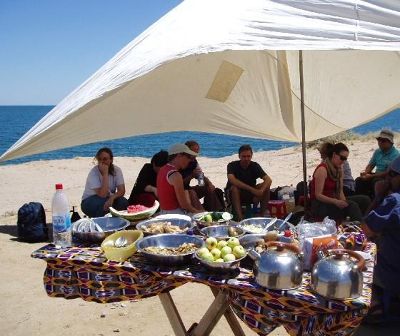 Then it was back into the bus for the long (over five hours) drive to Samarkand. 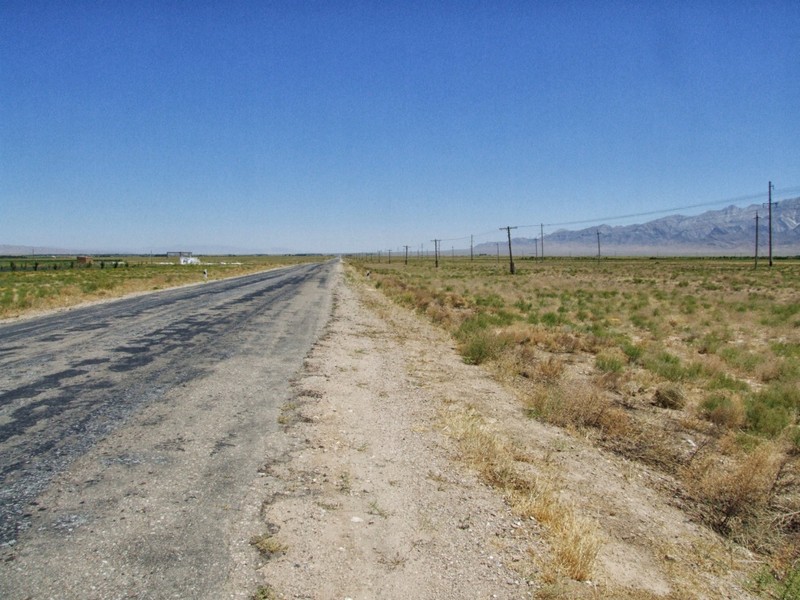 On the (not very golden) road to Samarkand

We arrived here late afternoon and checked into our accommodation at the family-run B&B Zarina. This rivalled the Hotel Mosque Baland in Bukhara as the friendliest we stayed in on our travels, and definitely took the prize for best location! It is situated only a few minutes’ walk from the Registan and set back from the main road in a quiet cul de sac. Our room wasn’t large, but it was clean, with an en-suite bathroom and air-conditioning (though the latter wasn’t as efficient as I’d have liked in that heat.) 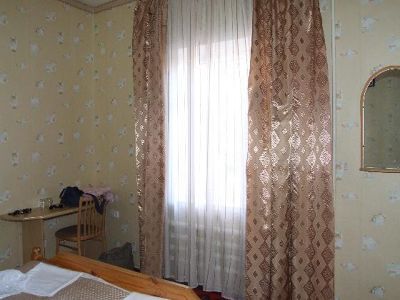 Our room at the Zarina B & B

The building itself was lovely. The courtyard was decorated with a large number of antique architectural objects such as old doors and the family were obviously keen collectors because the basement breakfast room had displays of old radios, musical instruments, a Russian adding machine and more! The columns supporting the front porch seemed to be antiques too. 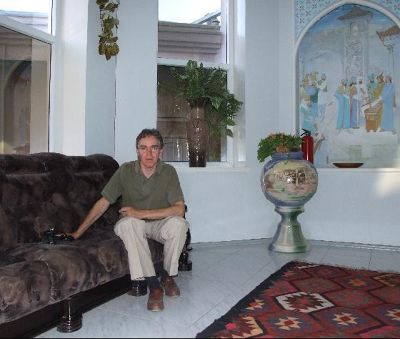 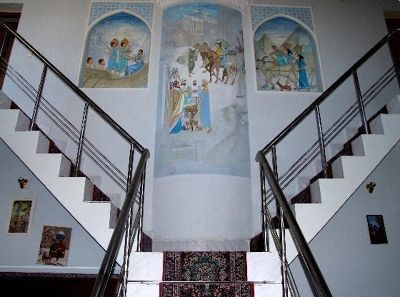 The hallway at the Zarina B & B 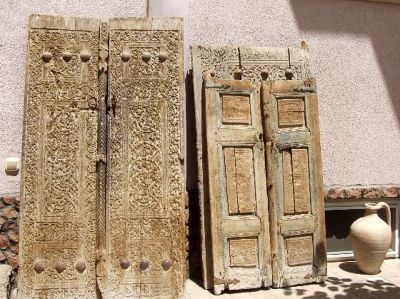 There wasn’t time left today for sightseeing so our thoughts turned instead to dinner. A small group of us decided to visit a restaurant just a short walk from our hotel, the Marco Polo. Marat, our guide, had told us that it was just recently opened so he had no reports about its quality, but he knew the chef who had a good reputation. Well, we had to conclude that it was the chef’s night off! 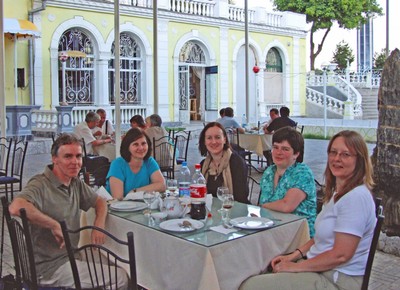 At the Marco Polo restaurant
- Chris, me, Georgina, an Irish lady (whose name I've unfortunately forgotten) and Sue
Thanks to Sally-Ann who took the photo

The setting was nice, with a large paved area screened from the main road with bright yellow and white awnings. Our group of six got a good table in the centre of this area. The waitress though spoke no English, and unlike everyone else we met in Uzbekistan, was not inclined to be helpful, although was not exactly unfriendly. We managed to decipher some of the options on the Russian menu, but everything we tried to order seemed to be unavailable – although one of her colleagues did eventually appear with the hoped-for cold beers.

Chris and I ended up ordering beef shashliks, which were OK but not what we’d wanted. Meanwhile Georgina, having been assured that the salad she’d ordered was vegetarian (and in fact their only vegetarian option), was quite surprised to find a small pile of meat on it – which the waitress ‘helpfully’ suggested could be pushed to one side to turn it into the vegetarian dish requested. This would have been less irritating had we not spotted, some minutes later, two local men eating a very obviously vegetarian aubergine dish.

Oh well, at least we had enjoyed the beer!

The Registan at night

Of course, we couldn’t be so close to the famous Registan and not take a first look. I will save all the history and detailed information for a later entry as for now all we wanted to do was see it!

Some evenings there is a son et lumiere show at the Registan, usually arranged especially for tour groups. I had read that this wasn’t of great quality – the sound poor and the commentary fairly dull. We didn’t bother even trying to get to a show during our stay, but there had been one on this first evening, and although it seemed now to have finished it meant that we got to see the magnificent buildings nicely illuminated. 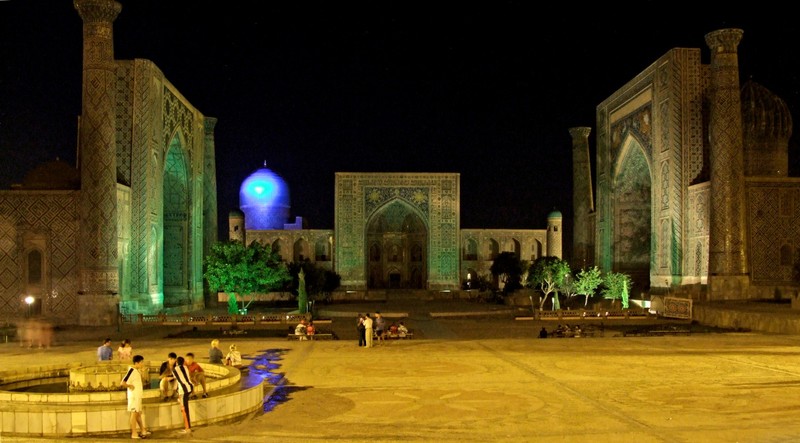 The Registan at night

Guards ensured that we didn’t get too close, as we hadn’t paid for the show, but no matter – we could see a fair bit from further back, and the edge of the fountains made a good rest for my camera. And what we saw certainly whetted our appetites for a more detailed look tomorrow.

Great blog and photos as usual. I have enjoyed imagining your trip and comparing to mine. I am sure our high speed train was more comfortable than your bus.

I always would like to see the sunrise but when it's time to get up I opt to sleep instead except when I really have to get up. Not so often get to feel that but when do feeling of being only one awake it's great! Nice that you had that chance in your trip

Thank you Henna and Bob

I'm not sure whether there were any high speed trains back then, but if there were we weren't offered the chance to travel in them! Henna, you sound like my husband Chris - it usually takes much more than a sunrise to get him out of bed early!

The night shots are amazing. What beautiful buildings.

I have enjoyed reading all of your posts on this trip. It all still remains on my bucket list and time passes so fast. But hopefully one day soon

Thanks Sally and Larry - it's a special place to visit for sure. I'd like to see some of the other Stans too, but I have the same problem as you Larry - so many places, so little time!

Beautiful night shots of the Registan. i look forward to seeing more of it in your next entry (ies).

More of the Registan in my final entry, to follow later today or tomorrow