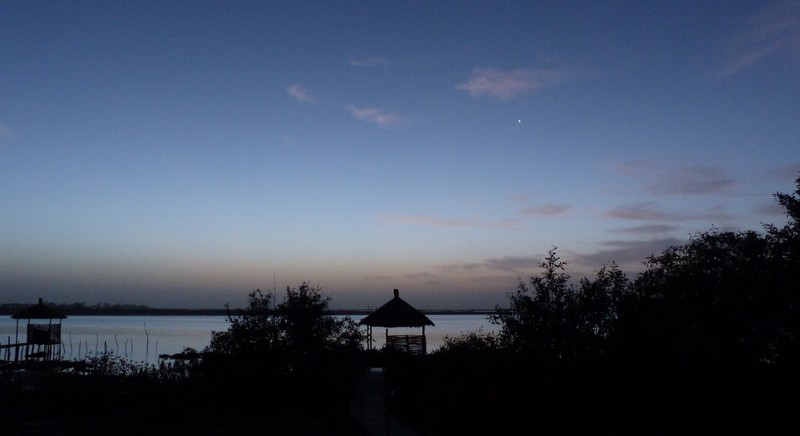 With an early departure from Souimanga Lodge necessary today, we were up before sunrise and were treated to a rather different but equally beautiful view of the lagoon from our deck. 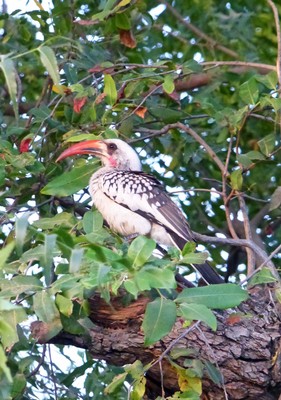 But there was no time to linger over photo-taking, nor to take a walk along our boardwalk to the hide to admire the views from there. Instead we quickly finished packing, left our bags outside the door to be collected shortly, and went to breakfast which the lodge had helpfully arranged for us to take ahead of the usual time.

There was just time at breakfast to take one last bird photo, as a rather handsome Red-billed Hornbill sat in the trees above the decking while we ate.

After breakfast we were picked up by our driver, David. On our drive here we had taken a short-cut, crossing the Saloum at Foundiougne, but for this return journey we took a different route. David had heard that there were long delays on the ferry so chose to take the longer way around by road.

We drove first to Fatick, where we stopped for a short while as David needed to pick up a spare tyre (having used his spare to replace a punctured one on the drive up the previous day). This was the only place in Senegal that we encountered any significant hassle, with a lot of the local children (who should properly have been in school) crowding round to beg. I found that pointing my camera towards them was an effective deterrent! 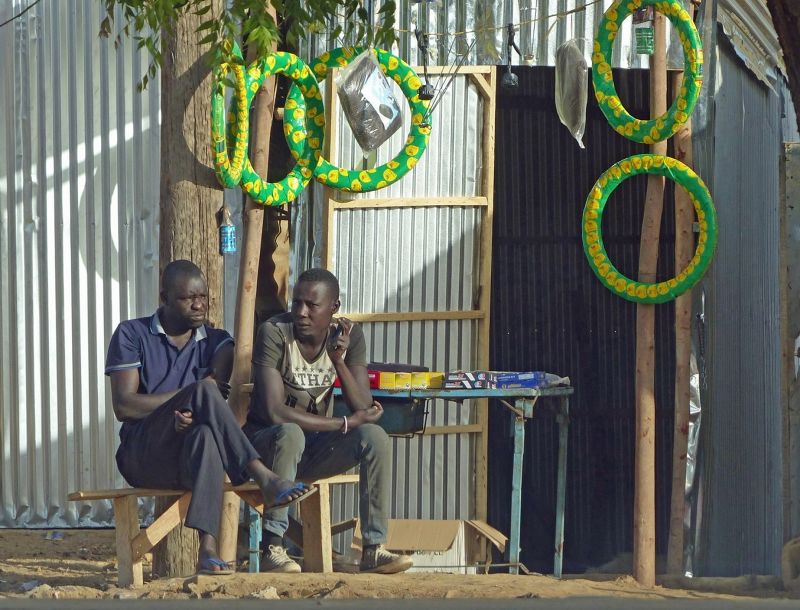 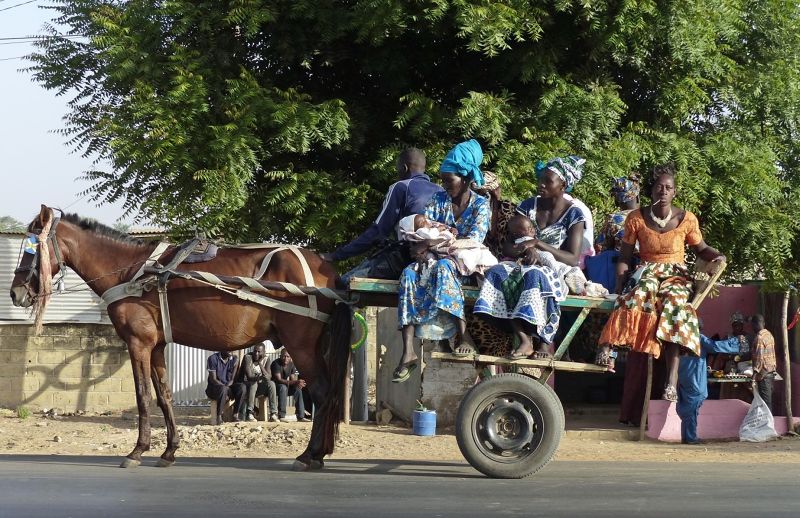 From Fatick we could have taken the main N1 road south east to Kaolack but David chose a more circuitous route on a better road rather than subject us to its bumps and pot-holes! This took us through a lovely landscape of wide salt flats dotted with palms and big skies. Our only concern was the rather large number of overturned lorries we saw at the side of the road; David explained that they are often badly over-laden. 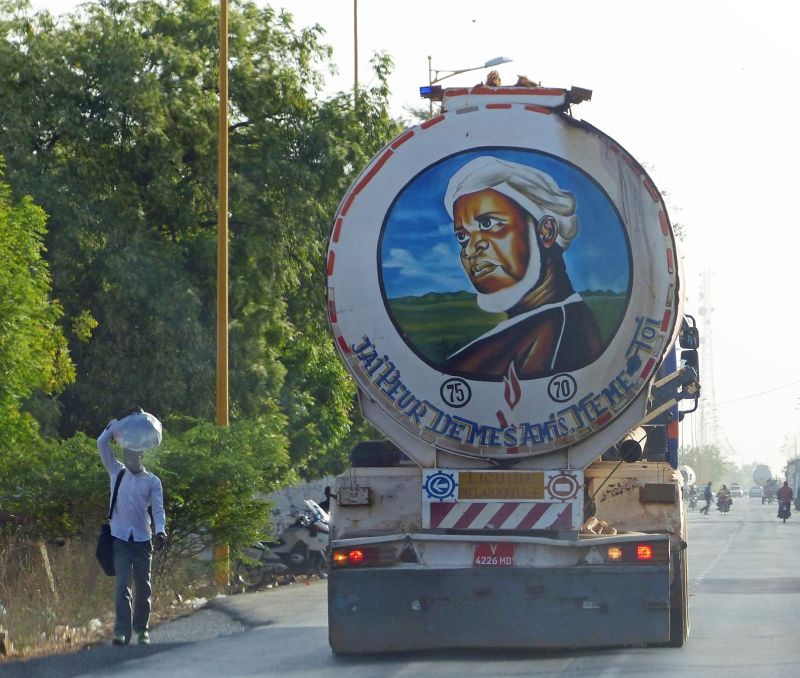 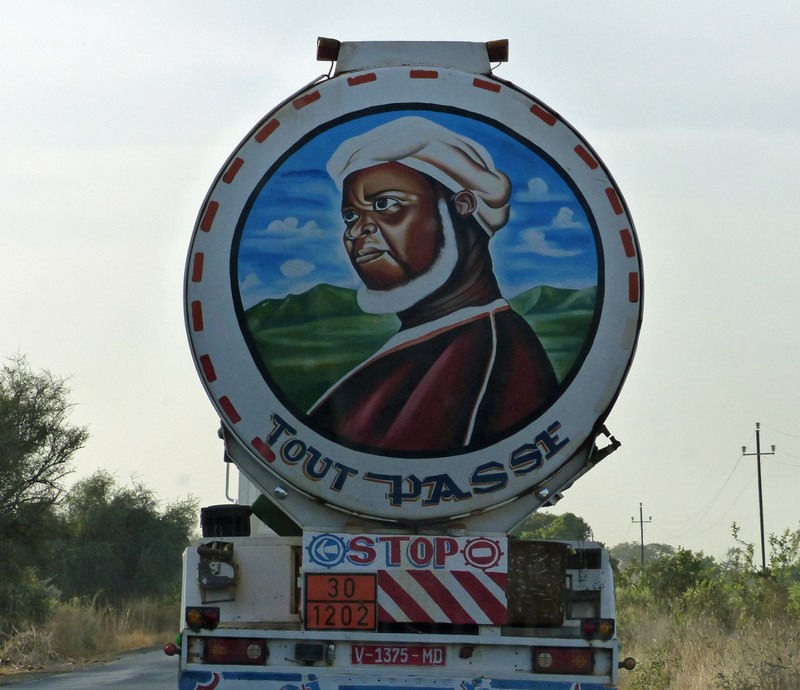 Lorries from Mali on the road

When we finally reached Kaolack we found ourselves in the middle of a giant traffic jam. It lies at a major crossroads, with lorries from landlocked countries such as Mali passing through on their way to Dakar and the sea on the east-west N1, and the main north-south routes through the country, N4 and N5, converging here. Add to that the fact that there is a huge market on the southern edge of town, and there was some sort of convention on in town, and the result was gridlock. We must have taken well over an hour to drive a few hundred metres through the town, despite David attempting to go around the jams on the back-streets. At least in this busy town there was always some activity to watch on the streets around us, although having forgotten to charge my camera batteries before leaving Souimanga Lodge I was frustratingly unable to take any photos!

Eventually we reached the far side of town and could get moving again. There were no more major hold-ups, but we did have to negotiate the 25 kilometres or so of dusty, bumpy, unmade road on the N5 between here and Same. By mid-afternoon we were at the border in Karang; the crossing went smoothly and on arriving in Barra our luck improved, as the queue for the ferry was short enough to guarantee us getting on the next boat. The ferry journey was uneventful, and I squeezed one last photo out of my dying battery. 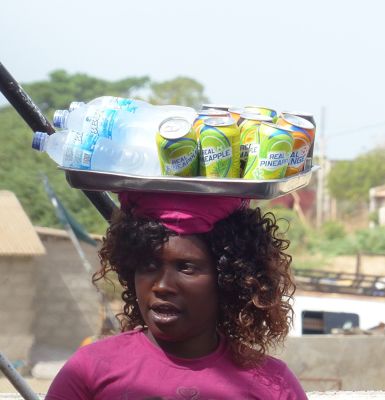 Refreshment seller waiting to board the ferry

Despite our good fortune with the ferry timings it was late afternoon by the time we docked in Banjul and completed the short drive from here to Kotu Beach where we had spent the first night of our trip and were to spend the last. Altogether the journey had taken us almost nine hours and we were very glad to arrive, even though it had been for the most part very interesting.

Our room at the Kombo Beach Hotel looked identical to the one we had stayed in on that previous occasion, although this time we were in block three rather than four and had less of a view. 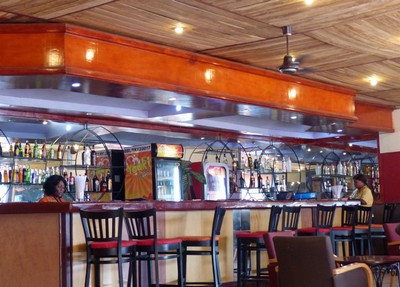 We had a drink in the bar where we had eaten previously, but for dinner this time we discovered the Brasserie, an a-la-carte restaurant on the premises and overlooking the beach. We had a much better meal here, with the scallop starter being the star dish. It was very pleasant to eat with the sound of the waves crashing on the shore as the background sound track, and a relaxing end to the day after that long drive.

I was stopped cold by the photo of the horse pulling an axle with a little cart built on top of it. What a marriage of old and new. (I saw the same thing in the Dominican Republic, but in that case the horse was pulling pieces of lumber.

These carts are really common in Senegal Rosalie - they call them 'bush taxis' and they're used to transport both people and 'stuff' - goods to market, building materials, crops ...