To Mass in Mar Lodj 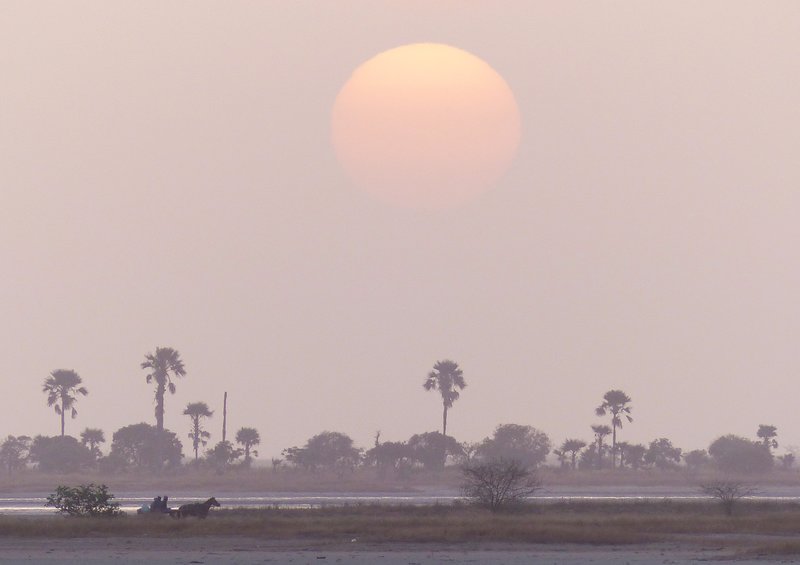 Our second morning at Souimanga Lodge, and again we awoke to a beautiful sunrise over the lagoon. 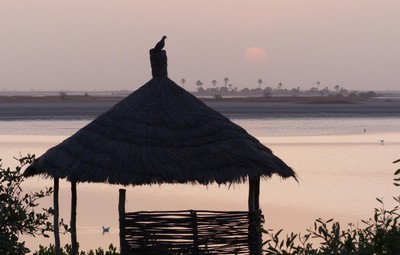 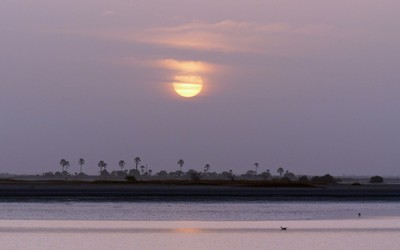 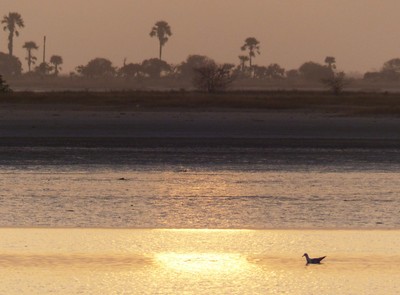 Learning from yesterday’s experience with our resident mouse, and Chris’s damaged earphones, we had tried to make sure there that was nothing so tempting within reach. But we didn't think to remove the fruit bowl, and discovered this morning that he had helped himself to more apple. Oh well, there was enough to spare – but we resolved to hide the fruit bowl too on subsequent nights!

The journey to Mar Lodj

After another lovely breakfast we were off on today’s activity. Perhaps unusually for a hotel, one of the offered excursions here is to Mass in a nearby village, Mar Lodj, which is on an island in the delta. Many of the tourists here are French and therefore I would assume many are practising Catholics, so that might be a reason the hotel offers this activity – or it could be in part because it is a fascinating experience for any European or other first world visitor. Either way, as Chris is a Catholic and we often do go to Mass when on holiday (and have had some equally fascinating experiences elsewhere as a result), this activity was a must for us, and indeed had been one of the things that attracted us to stay here. 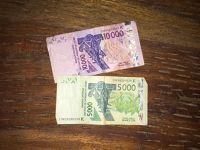 Our driver picked us up straight after breakfast. He introduced himself as Cheikh and said that he would also be taking us on the various excursions we had booked for later in the week. We asked about changing money – so far we hadn’t needed any local currency as we’d been on full board at Fathala, but today we would want some for the collection at Mass and later in the week no doubt for shopping in the markets we hoped to visit. So Cheikh suggested a stop in the local village, Fimela, where a shop doubled as a currency exchange.

The currency in Senegal is the West African CFA (Communauté Financière Africaine) Franc which is pegged to the Euro. Many hotels and tourist-oriented establishments accept the latter, and in any case it is easier to exchange Euros than Sterling or US Dollars, so it makes sense to travel with these. Our transaction was quickly and satisfactorily concluded (we were offered 13,000 CFA per €20 note, which was a fraction under the then-official rate of 660 CFA to the Euro, but with no exchange fees or interest seemed a good deal) and of course a few photos were taken! 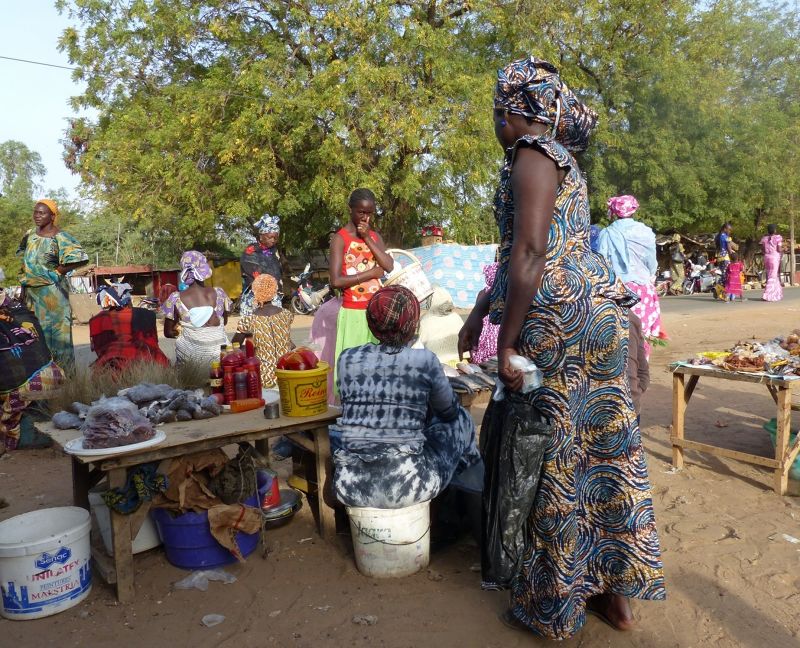 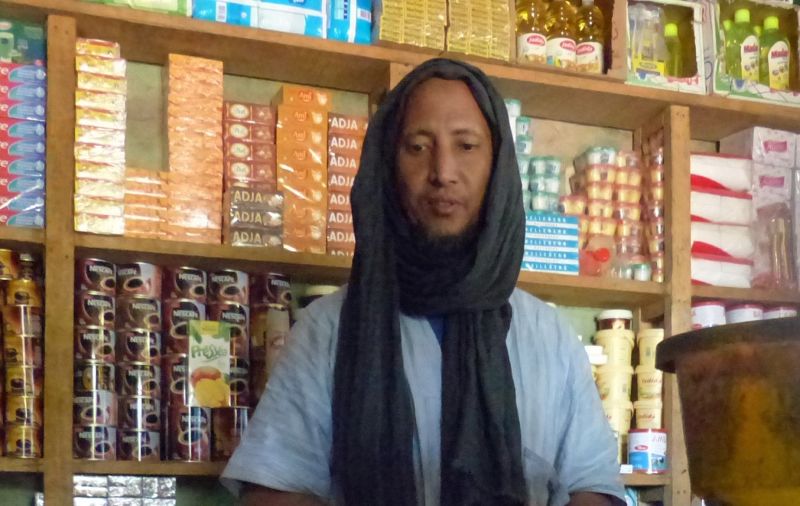 Inside the store where we changed our money

We then drove to Ndangane, a major fishing village in this region. Here we boarded a pirogue for the 20 minute ride across the creek to Mar Lodj, which was an opportunity to see and photograph life in this fishing community from the water. 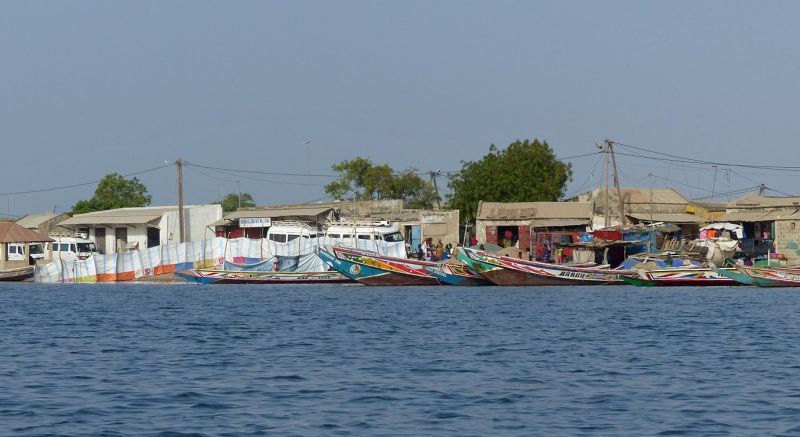 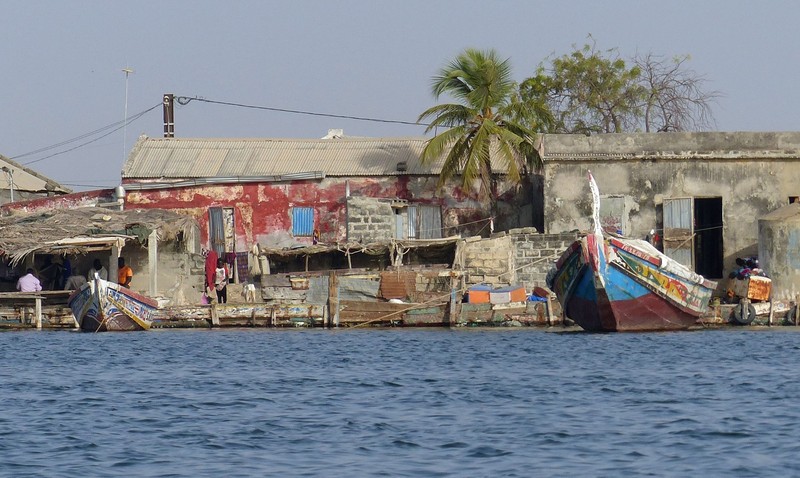 Ndangane from the water 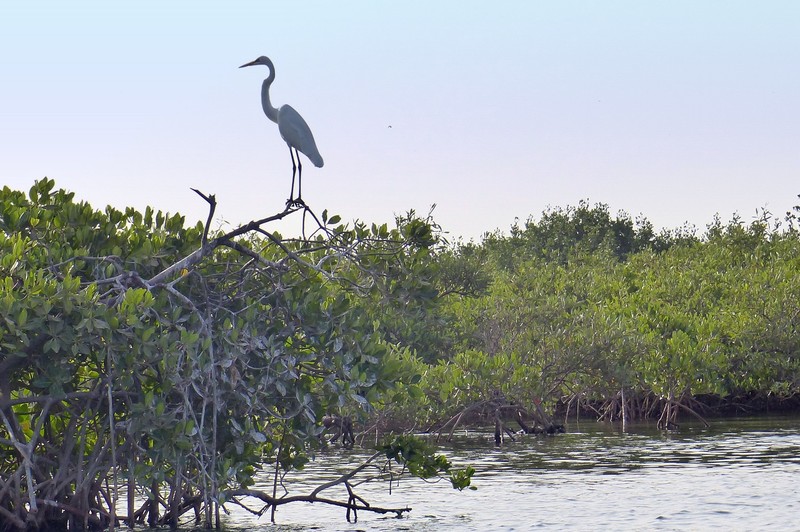 Arriving at the island we moored by a sandy beach a short walk from the village.

The coastline of Mar Lodj island

We were early for the service so there was time for a stroll around the village first. The main ‘sight’ here, apart from the rather attractive church which draws both locals and tourists, is a tree, or rather group of three trees – a kapok, mahogany and palm (although it has to be said that the latter has seen better days!) These have become intertwined, which locals like to say reflects the way in which the three religions of Islam, Christianity and Animism co-exist peacefully here. 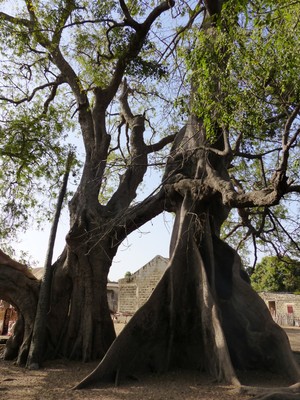 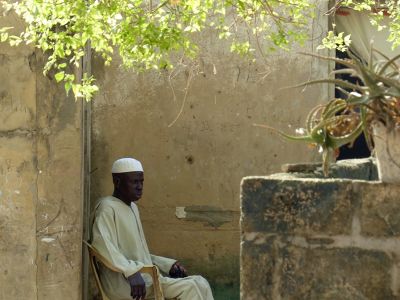 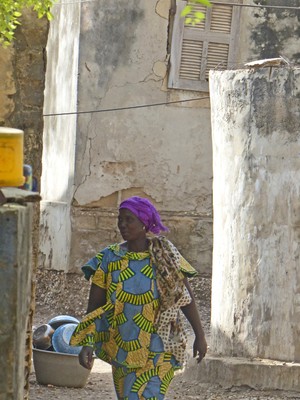 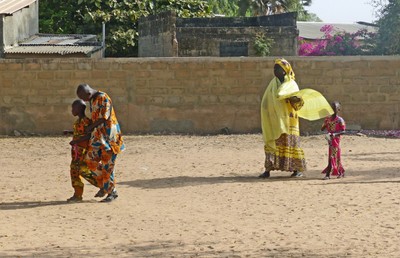 Local family on their way to church

The church itself is a striking round building, its design echoing local houses. By the time the Mass started it was packed – mainly with locals but also a sprinkling of visitors such as ourselves. 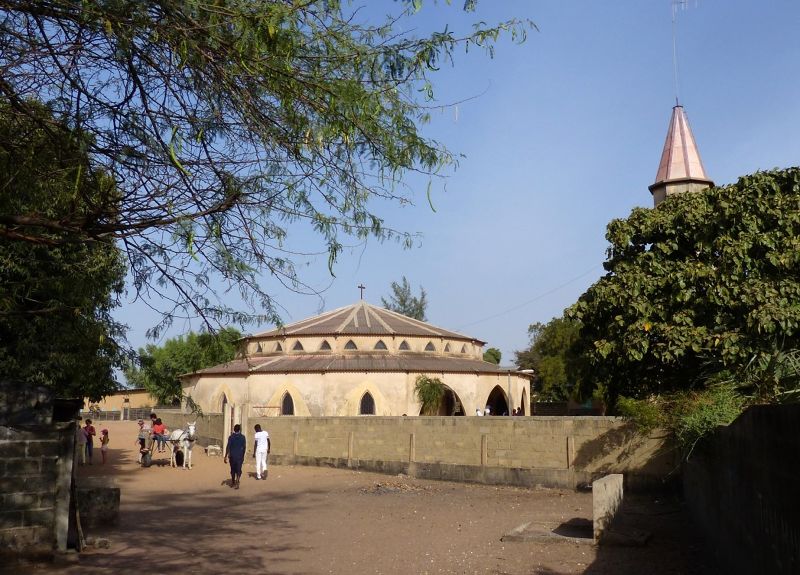 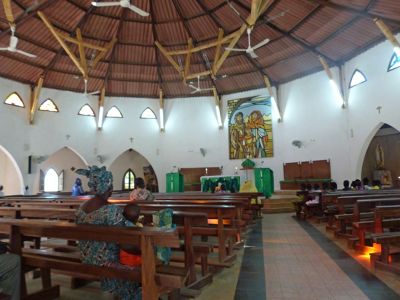 The Church of the Holy Family in Mar Lodj

I think anyone, whether a strong believer, or any believer at all, or none, would find this experience interesting, although you have to be prepared for a lengthy service with a long sermon in French. I speak a little, but I found this hard to follow as the accents are different to European French and the microphone was dodgy. I was so impressed by the excellent behaviour of the young children who sat quietly together at the front throughout, neither fidgeting nor talking.

The music and singing was beautiful, and I made a video of part of it, as a few other visitors were doing so and no one seemed to mind.

After the service we lingered outside for a while, taking discreet photos of the locals. I had of course dressed respectfully, but there was no way I could compete with the wonderful dresses worn by some of the local women for whom Sunday best clearly means exactly that. 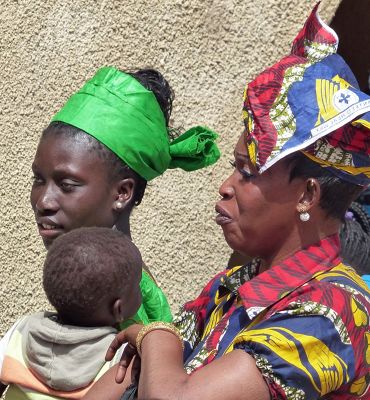 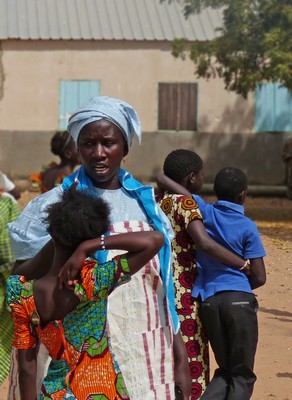 Locals after the Mass


On the way back to our pirogue we were invited to visit the local ‘market’, which was really just a group of local women who had spread their goods out in a strategic location on the walk up from the jetty. We didn't bother to look as we had a visit to a much larger market planned for a few days later. Instead we headed back to our boat and retraced our journey back to the hotel. 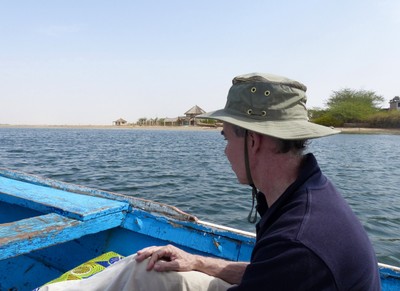 We decided to skip lunch as we’d had a decent breakfast and knew that dinner would be another four course affair. So we made coffee in our suite to drink on the deck (once we’d mastered the intricate Italian ‘pod’ system machine) and then spent another relaxing afternoon with a mix of pool time and bird-watching by the lagoon. The stars of today’s show were Spur-winged Lapwings, Great and Little Egrets, Black-headed Heron and Western Reef Herons, Whimbrels and various gulls. 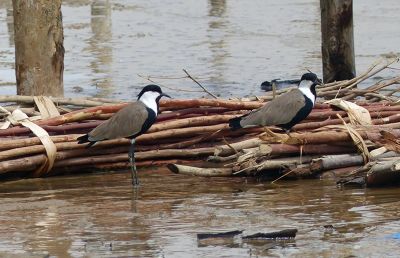 The day ended with another excellent dinner on the decking among the trees, with more explorations slightly further afield to look forward to tomorrow.

Before going to bed we remembered to move our fruit bowl to the safety of the fridge and hide all cables etc. in our suitcases, well away from the munchings of our resident mouse. But about 30 minutes after going to bed I heard the scrabbling noises and realised I'd left a silk bead necklace, bought the previous year in Tallinn, on the coffee table. I got up to put it away but too late - it had already been shredded! Yet another casualty of our room mate's insatiable appetite!

If I ever manage to return to Senegal, I'll remember to pack a mouse trap - one of those humane ones, of course!

I love the clothes that West African ladies wear. They're so colourful.

By the way, how did you know that the mouse was a Mickey and not a Minnie?

Mike, the mouse trap might not have been such a bad idea, as you'll find out if you keep reading! And Malcolm, I agree about the colours of the fabrics, so much so that I bought a length later in the week, planning to turn it into a skirt or sarong - it's still sitting in a drawer at home, three years later

And I guess I was just making assumptions about the mouse!

I used to bait my mousetraps with apple. They love it. Lovely video of the Mass. It reminded me of the music in some of the churches in Haiti. I love the drums.

Hi Sally - yes, 'our' mouse clearly loved the apples! And I agree about the drums

Nice video of the singing and drumming in church.

Thanks Don, I'm glad you enjoyed it