Life in the Sine-Saloum Delta

Sunrise in the Delta

We awoke quite early after a very comfortable night’s sleep in our suite at Souimanga Lodge. As we were completely un-overlooked, we had left the curtains open, so our first sight was of the sun just starting to rise over the mangroves and lagoon. Dressing quickly we hurried out with our cameras. 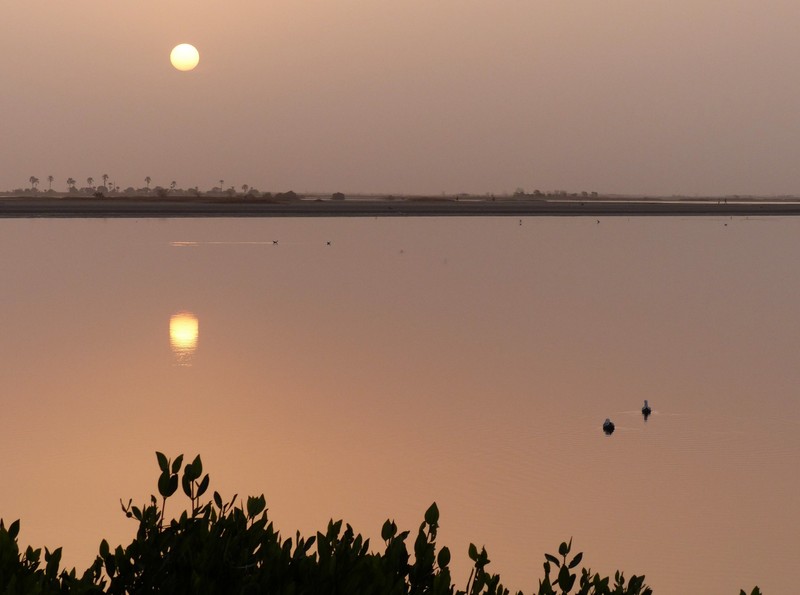 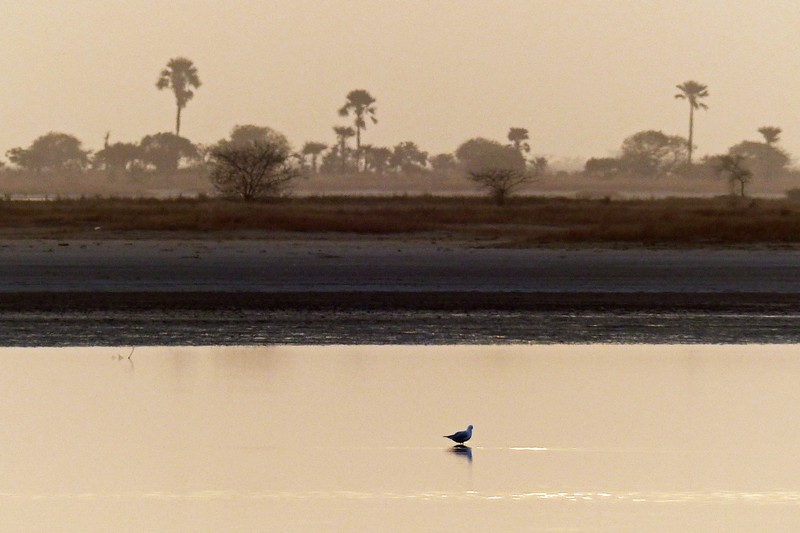 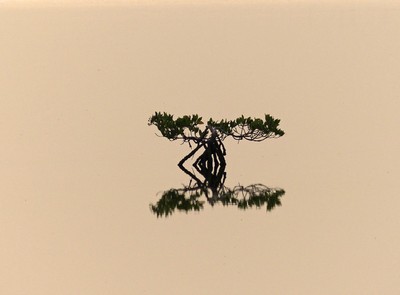 As it got lighter, we could see locals making their way to work (I assumed) from the small village out in the lagoon which is linked to Fimela by a causeway. Some were on foot, but the vehicle of choice was a horse and cart, otherwise known as the ‘bush taxi’. These are multi-purpose vehicles, used to transport goods, ferry children to school, travel from village to village and so on. They are practical, cope well with the uneven tracks, and of course are easy to look after, as long as the horse stays healthy. The carts these days are fitted with tyres, making for a slightly smoother ride along the bumpy tracks than in the past perhaps, but otherwise this form of transport has changed very little for centuries I reckon. 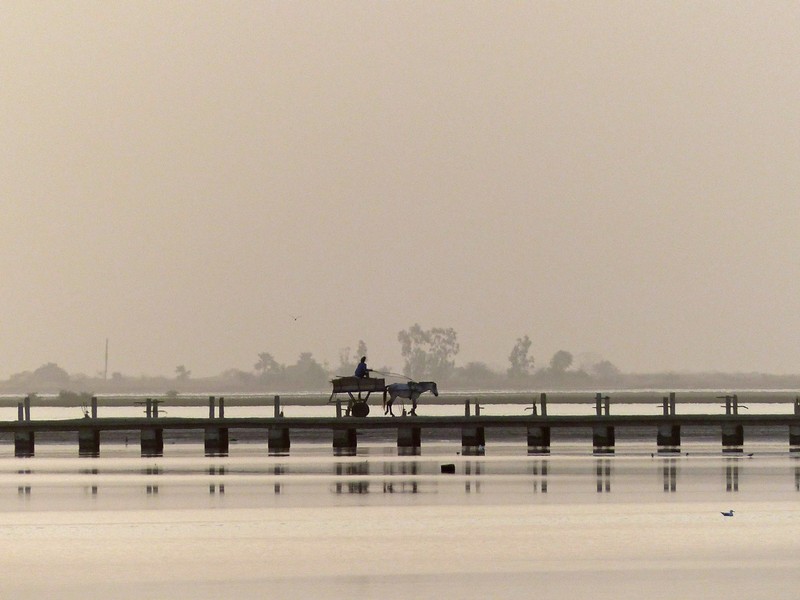 Returning to the room we discovered that the scrabbling noises I'd heard in the night (and taken to be birds on the decking outside) must in fact have been a mouse, which had not only partly eaten one of the apples in the fruit bowl kindly provided by the hotel but also the little ear buds from Chris's MP3 player ear phones! It felt like karma after we had laughed at the Belgian couple at Fathala who insisted on changing tents after a mouse ate their sugar. But we had no intention of giving up our lovely suite just for a mouse!

We enjoyed our French-style breakfast of fresh juice, fruit salad, crepes, omelettes and baguettes sitting out on the decking where we’d had dinner, this time able to appreciate the views of the lagoon through the trees. Those trees were full of birds which kept distracting me from my meal as I endeavoured to photograph them – only this Little Weaver posed long enough for me to be able to do so! 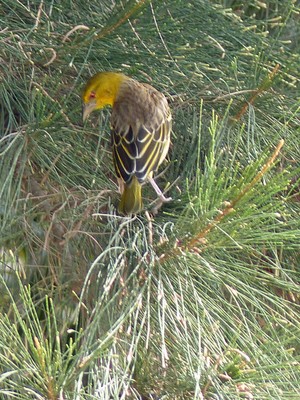 One reason for choosing Souimanga, quite apart from it being a lovely hotel in a beautiful location, was that it offers a wide range of activities in the local area, all aimed at introducing guests to life in rural Senegal. While many guests come here from Europe (especially France and Belgium) to soak up some winter sun by the attractive pool, that is not for us – or at least, only in small doses! Most of the activities are half a day in length, so on arrival yesterday we had promptly signed up for one a day! Most would be in the mornings, but today’s was scheduled for late afternoon, so we had much of the day free to enjoy our immediate surroundings.

We split our time between our own private deck, our equally private hide at the end of the boardwalk, and the main pool, which I had discovered was considerably warmer than our own plunge pool and of course also a better size for swimming. 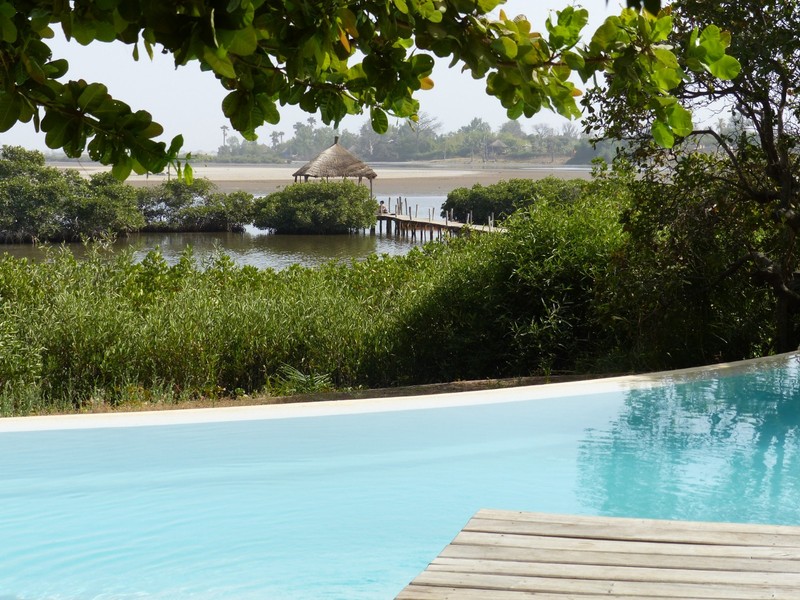 View from the main lodge pool

From our hide we could watch all the bird activity among the mangroves. Today there were lots of Egrets, both Great and Little, several Grey Herons, and a couple of Spur-winged Lapwings. 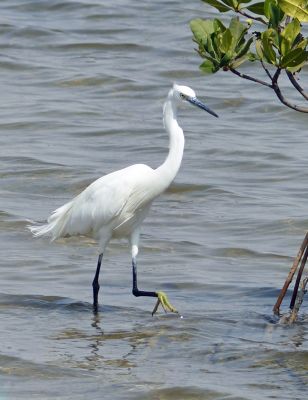 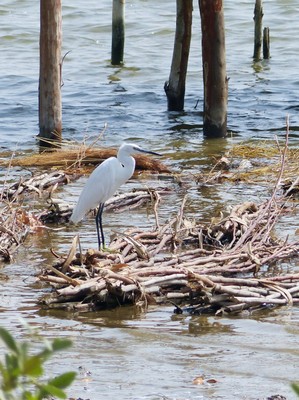 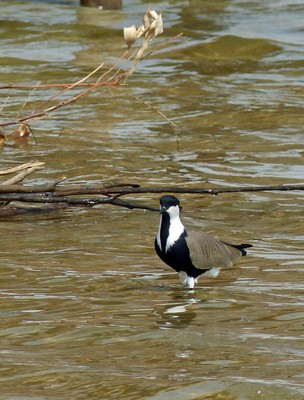 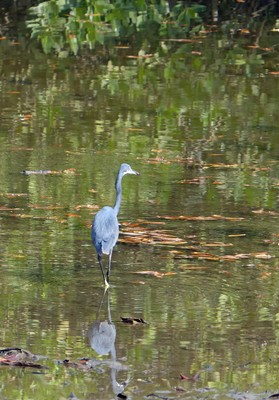 A Pied Kingfisher, one of my favourite African birds (perhaps because he looks like a Newcastle fan!), stopped by for a visit, and near the pool I spotted a Red-billed Hornbill. 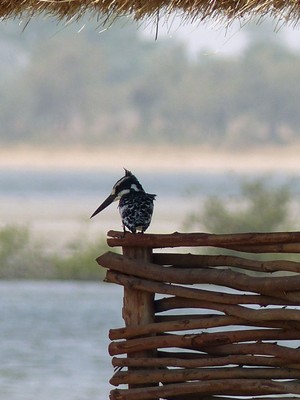 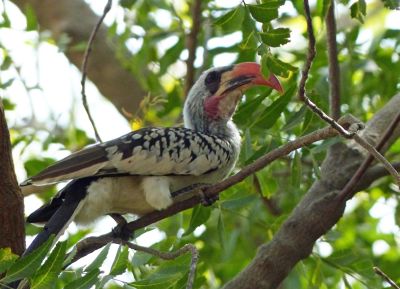 Lunch wasn’t included in our stay, but we found plenty on offer, including a set three course meal (no way – that would have been far too much on top of the other meals!) or some light dishes such as omelettes, Croque Monsieur or salads. We both had an omelette, but realised later that even that was unnecessary given the size of the breakfasts and dinners, so on the following days we simply skipped lunch.

Our own ‘bush taxi’

We had seen lots of examples of the local horse and cart transport, colloquially known as the ‘bush taxi’, both from our deck here and while on the road yesterday. Now it was our turn to sample it!

One of the excursions available from Souimanga Lodge is a ride on a horse and cart through several of the nearby villages, all of them part of the commune of Fimela. We had decided to book this as a way of exploring the immediate area around the hotel. I half-thought that we would be riding in some sort of touristy mock-up of the real thing, but no – this was the genuine article, although we were given a padded cushion on which to recline. And although we went out late afternoon, it was very hot for the first part of our ride, so I was glad I’d piled on the sun cream and taken both water and a hat, as we were completely exposed to the hot sun.

Although not a particular exciting outing, it was a chance to get out of the hotel and see how the locals lived. We stopped twice during the ride. The first time was to see a large termite mound – we had seen these in many other places previously but it was good to stretch our legs and take a few photos without the bumps of the cart. 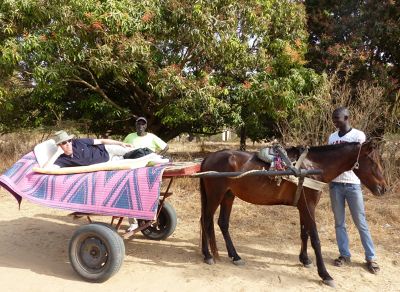 Our horse and cart, guide and driver 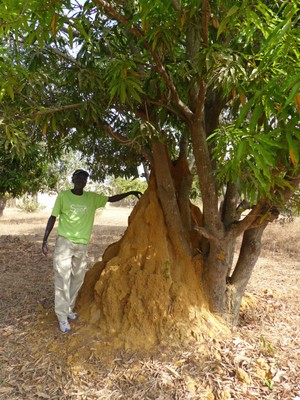 Our guide with the termite mound

I was surprised at the number of houses pointed out by our guide as belonging to French, or occasionally Belgian or other European nationals. These were mostly very smart and a striking contrast to local houses which are built mainly from bricks made from dismantled termite mounds and thatched with palm fronds. Our second stop was to visit just such a family compound. 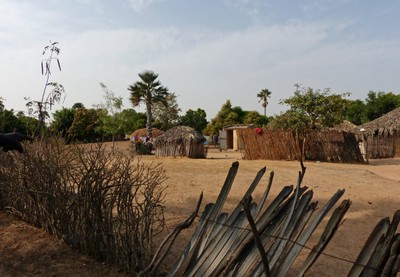 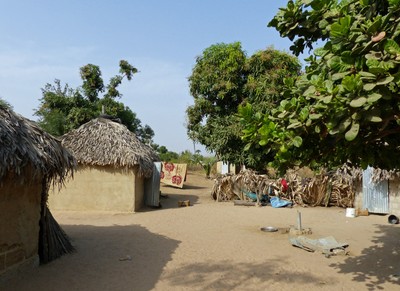 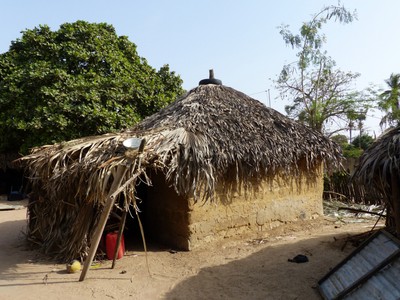 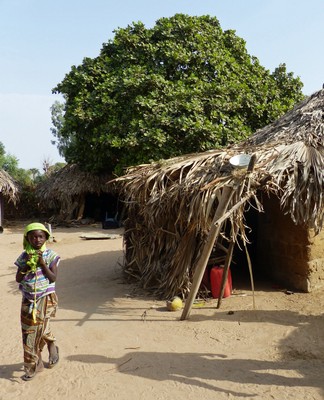 Local child outside his home

As well as the scattered villages we also went through part of the large palm forest which surrounds them, Yayeme, which we were to see more of later in the week. There are a few baobabs too among the palms, always worth a photo, and we spotted a Red-billed Hornbill on the ground, eating from the fallen coconut shells. 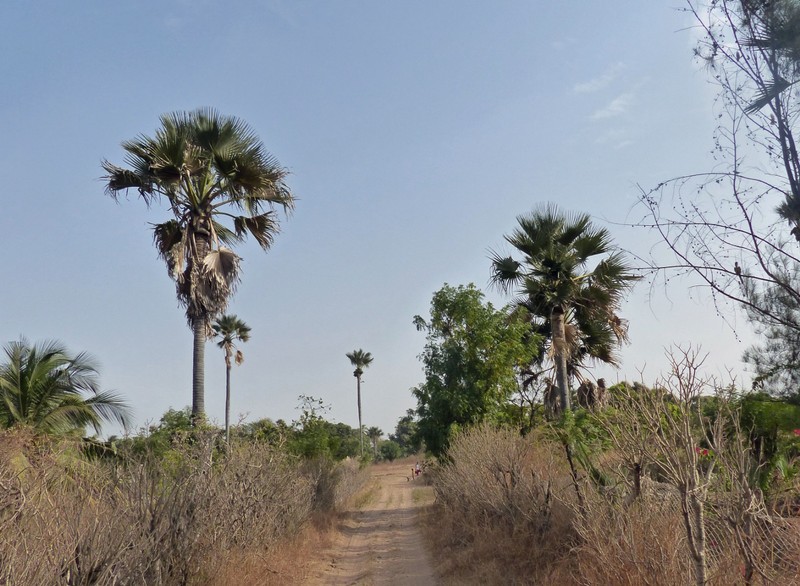 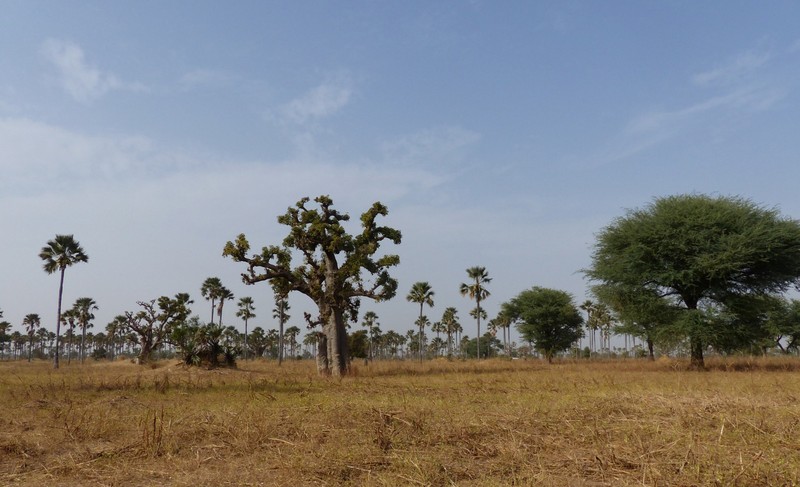 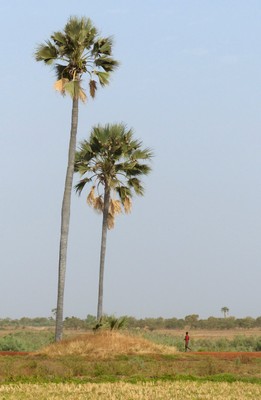 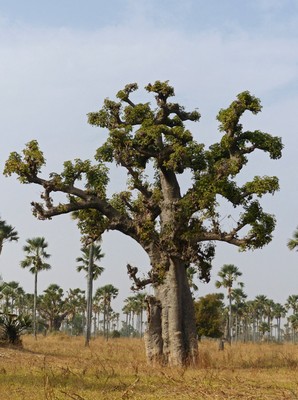 Palms and a baobab 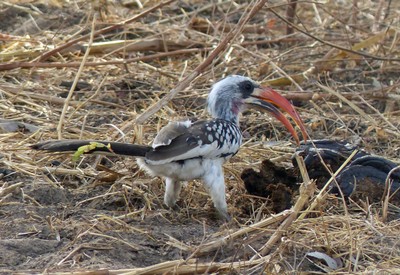 Our ride lasted about 90 minutes, which was enough in that heat, although by the time we got back to the hotel the sun was getting lower in the sky and the temperature more moderate. 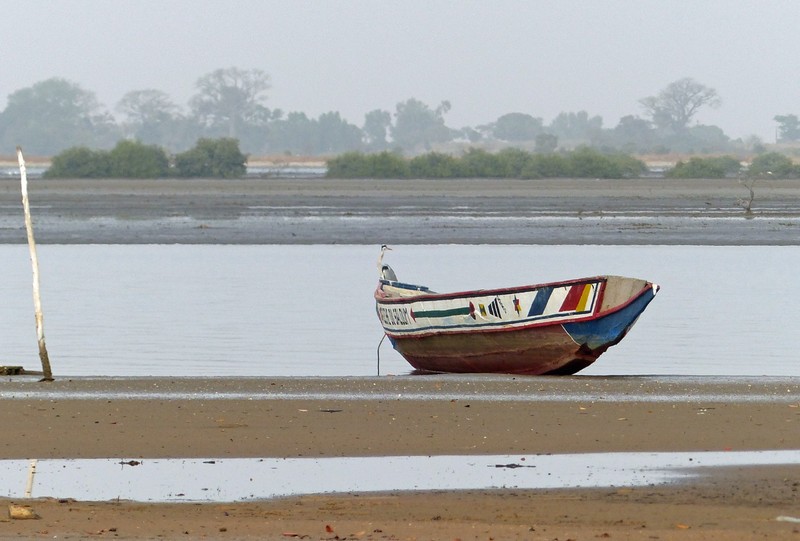 We finished the day with dinner again on the deck by the main building, with more of those excellent olives and great cocktails! A relaxing end to a relaxing day which had been a good introduction to both bird and human life here in the Saloum Delta region.

Love the egrets yellow feet. I wonder if the bush taxi ride was in the afternoon because in the morning it had more pedestrian uses. Or could you have booked in the morning?

Rosalie, I can't remember for sure but I think we had a choice for the bush taxi ride of either straight after breakfast or late afternoon and we chose the latter because we were still settling into the new place. All our other trips were in the mornings, but of course they were all in a regular car - oh, and a boat!

Lovely pictures and descriptions. I would have loved to go into the local villages and see how the people live. I really intend to visit more of Africa and have been inspired by you and others.

Enjoyed the photos, particularly the birds. You're certainly now seeing the real Senegal.

Could I ask for a mention of the hotel and excursion costs in the next edition.

The hotel (as I mention at the top of this page) is Souimanga Lodge: http://www.souimanga-lodge.com/uk/ The website still lists all the activities we did, and more besides, but doesn't give costs, and I'm afraid three years on I don't remember what we paid - only that the costs were reasonable enough for us to book something for every day of our stay. As I add to this blog you will read about more, and for Katie, more visits to local villages etc!

Shame that you don't remember the cost of trips, I were interested in those like Mike, still
your blog entries always get my "travel fever" to rise!

Don't know about his national preference but the pied kingfisher looks handsome!

I've been digging around in my notes and found that the bush taxi ride around the village cost us 10 EUR pp. The other excursions were longer and therefore dearer - probably double that at a guess. And of course three years later they may have got more expensive, but I felt the prices were fair and probably still will be. Of course we added a good tip to Cheikh on top, at the end of the week!

It was good to see that you were able to experience life as a local while enjoying all the wonderful birdlife. It seems an interesting, yet relaxing sort of place.

Hi Malcolm - 'interesting yet relaxing' exactly sums it up

I always like tours where you can see how the locals live.

That was a big factor in choosing this hotel Don, as the focus of the tours is very much on daily life in the region