A return to Gambia

In 2014 we had visited Gambia for some winter sun so in search of similar two years later we decided to check out Senegal. But initially that meant a return visit to Gambia!

There are two options for flying to Senegal from the UK, either to Dakar (via Brussels) or via Banjul in neighbouring Gambia. While the former may seem to make more sense, and is convenient for the hotels on the more developed coastal strip a few hours south of the capital, flying to Banjul is the preferred option if staying in the handful of hotels just across the border in the Sine Saloum Delta region – and that is where we were headed.

The Gambia Experience and sister company Senegal Experience have pretty much of a monopoly on travel and hotel bookings to the region from the UK (many of the hotels can only be booked through them) and charter flights come as part of the package. On our previous visit to The Gambia with them two years before our flights had been with Monarch; this time they were with Titan.

Because the flight left Gatwick very early, we opted to stay the previous night in the South Terminal’s Hilton Hotel. The cost of this was balanced by not having to leave our car at the airport, and it also meant we avoided the anxiety of getting to the airport on time, especially in unpredictable winter weather. So we were in the airport the next morning in good time and stress-free.

While nothing special, there was also little to complain about in the flight. The plane, an Airbus, was new and the leg-room generous. Service was friendly, and passenger announcements clear and comprehensive. While the flight was late in leaving this was through no fault of the airline – a checked-in passenger failed to present himself at the gate so his luggage had to be unloaded. Don’t you just love people like that?!

The flight lasted a little over six hours. Unusually, in-flight entertainment was provided via an app which we had to download in advance to our tablets. Presumably if you have no such device you have to do without, but that isn't a great hardship as the selection of films on our flight at least was quite limited and uninspiring. Meals were included, as were tea, coffee and fruit juice, though other drinks had to be paid for. The food was unexciting but quite tasty for an airline meal - pasta salad, chicken fricassé, chocolate cake.

Our route took us over Spain, Portugal, Morocco and down across the Sahara to West Africa. From my window seat I had good views and the pilot pointed out landmarks such as Lisbon and the Moroccan coast line. 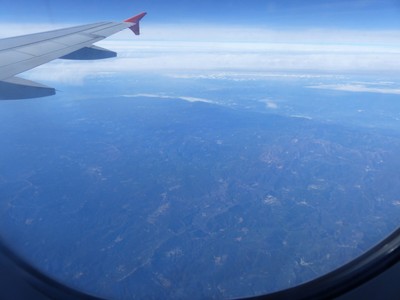 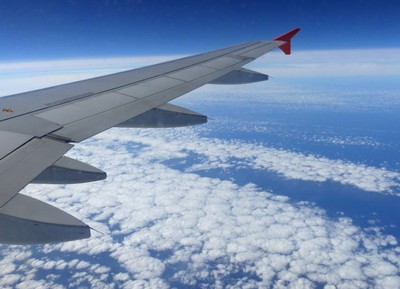 Off the coast of Portugal 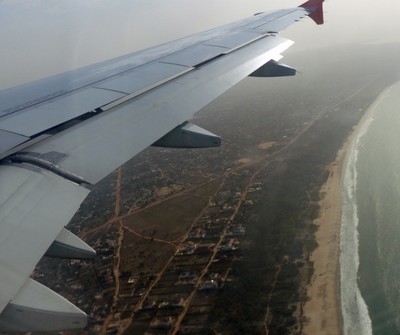 Coming into land in Banjul

We landed about 30 minutes late at Banjul (thanks to that non-appearing passenger) and cleared immigration after not too long in the queue. After collecting our luggage, we were met by a Gambia Experience rep who directed us to the bus that would take us to our overnight accommodations in the Gambia. Stage one of our journey was completed.

Overnight at the Kombo Beach Hotel

Our choice of hotel for this evening was pragmatic. Our brief stay didn’t justify a splurge on the lovely Ngala Lodge where we had stayed on our previous visit, so we just went with the travel company’s suggestion of Kombo Beach as being close to the airport and mid-priced. This is a rather large hotel which, while it wouldn't be our choice for a holiday base (too large and ‘packaged’ for our taste) was adequate for our one-night stays either side of our time in Senegal.

Rooms are in four big three-storey blocks – ours on the first night was in the fourth, furthest from reception, bar and pool. This was a bonus as it was quieter and also had a good view across a tennis court to some palm trees and the beach beyond.

Our room was very simply furnished but provided with a safe, small fridge to chill drinks, and air conditioning. It had a balcony with a couple of plastic seats, a good-sized and comfortable bed, and an over-bath shower in the en suite. While the shower was good, the curtain was of the horrible flimsy sort that seems to attack anyone showering within a foot or more of it! 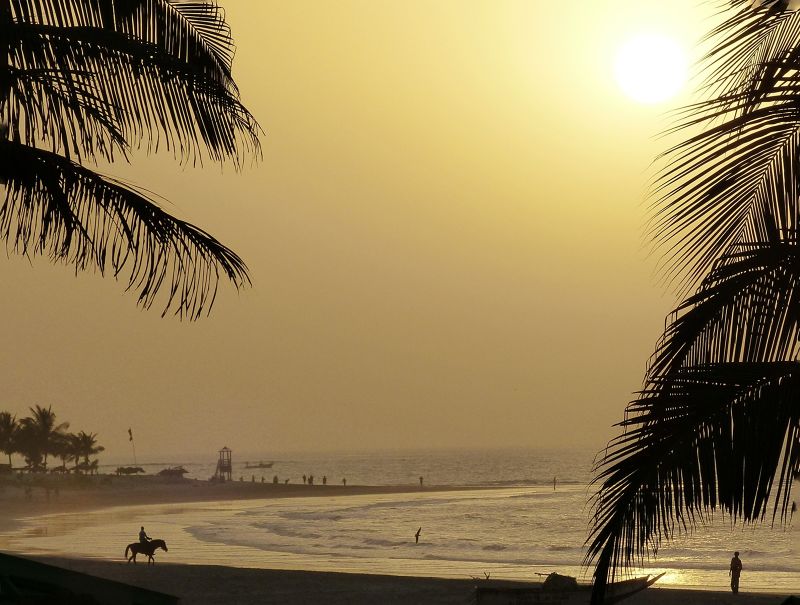 View from our room


We watched the sun set over the beach from our balcony, then spent the evening in the bar, where drinks are reasonably priced and snack meals (burgers, panini etc) are available. We could also have eaten in the adjacent open air buffet restaurant, but I'm not a fan of buffets in hot climates, and in the dark we failed to spot the smarter table service restaurant on the far side of the pool. So we had a pleasant enough evening and retired to our room for a prompt night as it had been an early start that morning.

Sarah, I await your Senegal tale with interest.

During my working life, I visited both The Gambia and Senegal on several occasions (negotiating contracts with hotels and ground agents) and I found them to be chalk and cheese.

Despite The Gambia being surrounded by Senegal, it still seemed to be run along British lines. Indeed, it was often even amateur compared to the Senegalese, who were attuned to French culture in terms of food and efficiency. I did, however, enjoy both!

Thanks Mike - yes, I agree they are very different. On our earlier trip to Gambia we were fortunate to stay in two wonderful hotels but overall I found Senegal had more to offer once we got outside the hotels, although the birding in Gambia was fantastic! I must write that trip up too some time soon

We were intending to go to The Gambia many years ago but had to call it off, so I'm looking forward to reading about what we missed

Thanks Malcolm, but I hate to disappoint you - this series of entries will be almost entirely about Senegal

As I explain in my intro here, we had to fly to Gambia on our way to Senegal, but we didn't hang around here as we'd been two years previously. I promise to write that trip up too in due course

We too flew Titan, and also found them to be one of the better charter flights we have taken. I believe Kombo Beach was just across the road from where we stayed at Kotu. As you say, all very 'packaged'.

There are several hotels around Kotu and all pretty much on similar lines. This was fine for one night but I wouldn't want to spend longer there. Which one were you in Grete?

We were in the Bakotu Hotel Sarah, very pleasant, nice food, friendly staff.... shame about some of the other guests (think: Chav Central). I chose it for the birding (it has its own platform overlooking the creek).

I had no problem with the other guests at the Kombo Beach, but they were clearly looking for different things from their holiday than we were