The truth is out there

From Fort Sumner we continued south, cutting across country on State Road 20, with hardly another vehicle to be seen, and then picking up Highway 285 for the run down into Roswell. 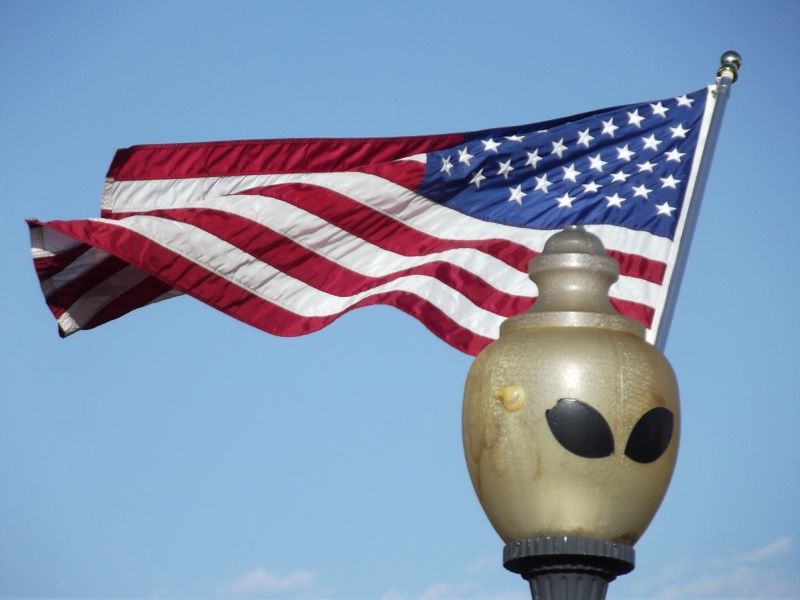 Our first task on arriving in Roswell was to find somewhere to stay for the night. There seemed to be no accommodation right in the centre of the town but we found a Days Inn in a good location for us, near some restaurants and reasonably priced (neither the cheapest nor by any means the dearest that Roswell has to offer). 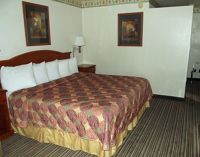 Many of the rooms were set well back from the busy main road, and we were able to secure one of these – a large room on the ground floor, with parking right outside as is the norm in US motels. We had a comfortable king-size bed, fridge, microwave (didn’t use this so can’t vouch for it), large TV and coffee-making facilities. The bathroom was clean and well-maintained, with basic toiletries and a hairdryer provided. The motel also had a pool but this had closed for the season, so I couldn’t have taken a dip even if we’d had time, which we didn’t – there were sights to be seen!

Roswell would be a totally unremarkable town were it not for a single event – an event that quite possibly didn’t even happen, or at least not in the way that many believe it to have done. In June 1947 a local man found some odd-looking debris on a ranch some 30 miles north of the town. Many of those who believe in UFOs are convinced that he had found a crashed spaceship, complete with its alien pilot who died in the crash. Sceptics are equally convinced that it was no such thing. But whatever the truth of the matter, one thing is certain – today, Roswell is a town obsessed. 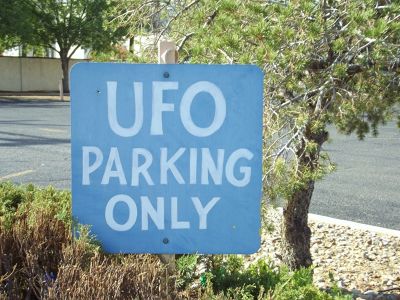 You cannot spend time in Roswell today without encountering a large number of aliens – they are everywhere! In shop window displays, on lamp-posts – the local McDonalds even provides parking for them. Depending on your viewpoint this is either an endearing example of American kitsch at its best, or a desperate attempt to attract visitors to a town that would otherwise be well off the beaten tourist trail. We fall firmly into the former group, and spent what remained of the afternoon poring over the exhibits in the town’s UFO museum. 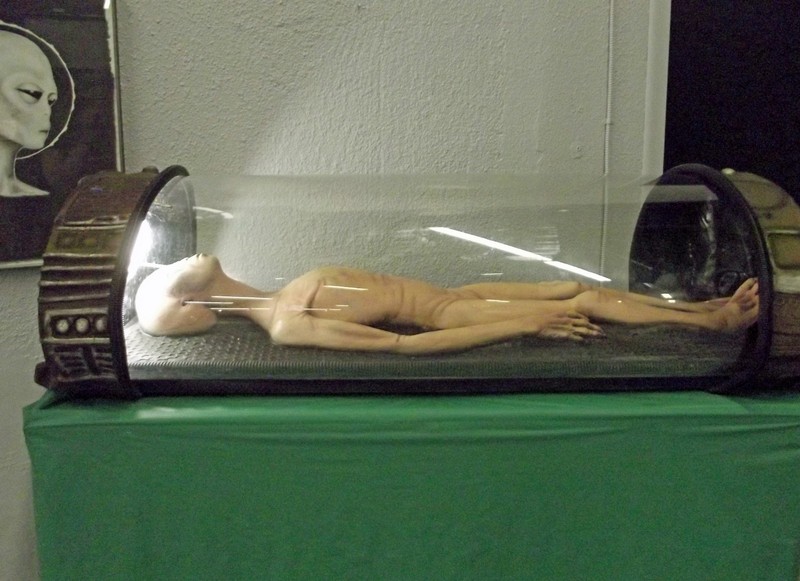 How the Roswell alien is believed by some to have arrived

As I mentioned above, in June 1947 a local man, ‘Mack’ Brazel, found some odd-looking debris on a ranch some 30 miles north of Roswell. Early official press releases referred to a ‘flying disc’, although these were quickly counteracted by reports identifying it as a weather balloon. The incident was soon forgotten, and it was only in the 1970s, with UFO fever at a height, that it was investigated further. By that time many of those involved would have had plenty of time to forget what had happened, but that hasn’t stopped a very detailed account being put together, albeit with many conflicting stories within it.

Many of those who believe in UFOs are convinced that Brazel had found a crashed spaceship, complete with its alien pilot who died in the crash. Sceptics are equally convinced that it was no such thing. The believers, including (naturally) those who run this museum, can find plenty of evidence to indicate some sort of cover-up by the authorities, while those who are unconvinced by tales of aliens can easily explain these cover-ups by speculation about secret government programmes aimed at getting early warnings of Soviet atomic activity. 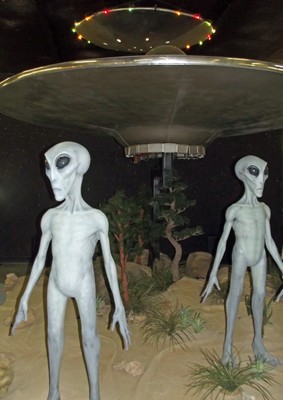 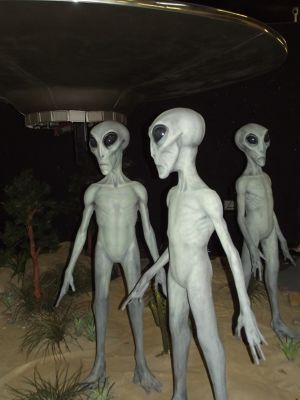 'Aliens' at the International UFO Museum

Whichever ‘camp’ you belong to, you have to be impressed with the dedication and attention to detail of those who have amassed this collection. It is extremely thorough. Of most visual appeal are the several dioramas of aliens, and most famously the rather gruesome visualisation of the supposed ‘alien autopsy’ that followed the 1947 discovery.

But these are just the tip of the iceberg when compared to the sizeable collections here. These are spread across a number of bays, each with a theme. The first few deal specifically with the Roswell Incident, with numerous press cuttings of the time, transcripts of interviews with those involved (and many who weren’t but were subsequently keen to air their views). There is little attempt at balance – we were left in no doubt that those responsible for these displays are convinced that the debris found on that ranch was the remains of an alien spaceship. In fact, as an open-minded sceptic I found it difficult not to get drawn into that belief myself, such was the weight of ‘evidence’ presented to me here, at least in terms of its quantity.

What seems incontrovertible is that the official story was changed a day or two after the initial press release, and the material displayed here also seems to point to the fact that this was no mere weather balloon, as the authorities claimed. But whether this was done to cover up an alien invasion, or perhaps more plausibly to correct the loose wording of an over enthusiastic individual and to conceal some sort of secret government programme, is certainly open to question. However, it is much more fun, at least while in Roswell, to suspend your disbelief and go along with the possibility at least that aliens once came here! And as a big science fiction fan, I certainly wanted to believe. 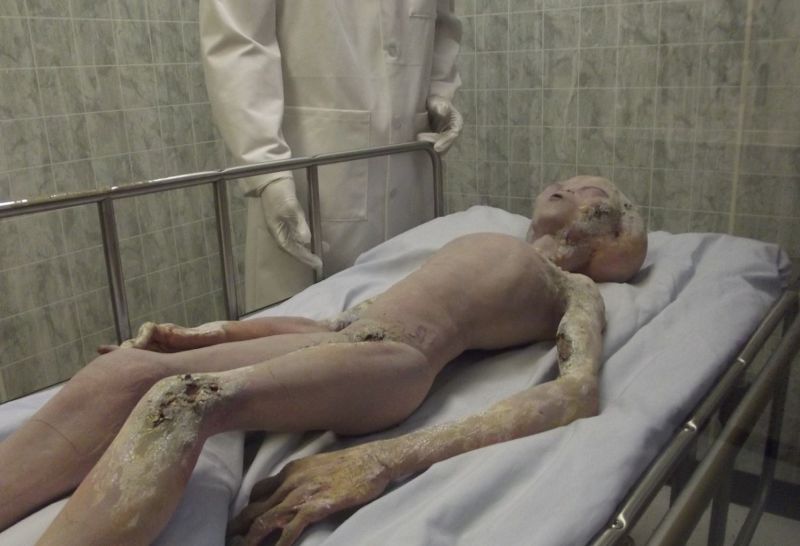 In addition to the material about the local ‘alien activity’ there are displays about other suggested examples of evidence of alien activity (such as crop circles, images left by ancient cultures etc), other famous sightings, quotes from famous people who have some belief in extra-terrestrial life (including astronauts and even a former President!) and a section devoted to the film that was made about the Roswell Incident. It is in this last section that you will find the ‘alien autopsy’, which I have to say could be quite scary for younger visitors.

Admission cost us $5 and we easily got that amount of fun out of it. And it was OK to take photos throughout, which for us added to the enjoyment – it’s not every day that you get to photograph an alien! The museum also had a large gift shop, although I felt that you’d probably need to be either obsessed with aliens, or a child, to find anything you really wanted to buy here. I was impressed however by the number of low-cost items on sale – very helpful for the parents of young children expert in pester power! And for those who want to really immerse themselves in the subject matter there is a research library onsite too.

The museum can also claim a major role in putting Roswell on the tourist map. Its popularity has brought visitors here in large numbers, encouraged business growth and even spawned an annual UFO Festival! 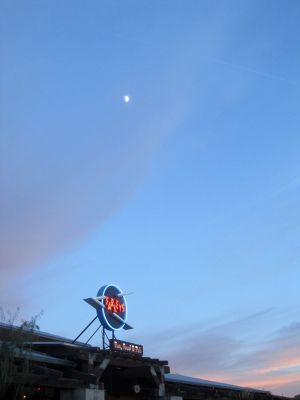 A sports bar, ‘Farley's Food Fun & Pub’ (a name clearly chosen to ensure you know exactly what to expect!), was directly across the road from our motel and had been recommended by a Virtual Tourist friend, ‘Jumping’ Norman. So that evening we crossed the road (carefully – it’s a very busy one) and checked it out. We liked what we saw – a lively pub/sports bar vibe, clearly popular with locals as well as visitors to Roswell. Most tables were full, but we secured a good one far enough away from the noisy bar to be able to talk, but near enough to soak up the atmosphere. We loved the eclectic décor, with all the pipework showing, a variety of old signs, and even an old car inside! 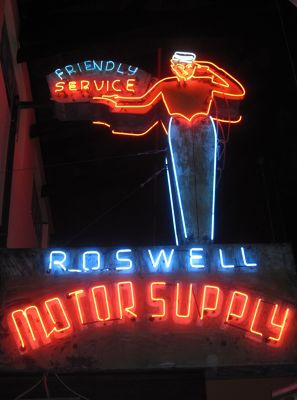 The menu was simple but appealing, and we both found something to suit. Chris was pleased to see one of his favourites, a Reuben sandwich, while I opted for ‘Viva le chicken’, which was a chicken burger with bacon, guacamole and cheese. It was a bit mean with the guacamole but otherwise pretty good, and the fries were excellent. To accompany our two mains we both drank the Alien Amber, which was pleasant and went well with the pub-style food, so we had a second one each for dessert to round off an excellent and varied day which epitomised several of the many sides of New Mexico.

I love this story. It sounds like a lot of fun. Roswell has been on my want to see list for a long time. We also want to see Point Pleasant West Virginia to see the moth man sites. We love little bizarre places like this. I know I would have bought a frig magnet in that little gift shop you mentioned and had an alien amber also.

Very interesting thanks for sharing

Very interesting thanks for sharing

Thank you Ruth and Larry

Larry, you would love Roswell! I had to look up Point Pleasant West Virginia as I hadn't heard of the Mothman, but now I want to go

We've never made it to Roswell but you make it look like fun. I'm on Chris's side; I love a good Reuben sandwich.

Yes, Roswell is fun Sally, if you like anything offbeat

Wow, Sarah, great blog piece! Never been to Roswell as you know but the International UFO Museum sounds fascinating and well worth a visit!

Thanks so much Sylvia. I definitely recommend a visit to Roswell if you're in the area - something a bit out of the ordinary for sure