The road to Jaipur 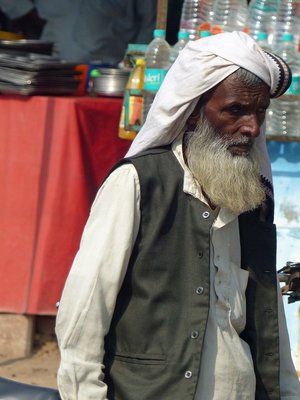 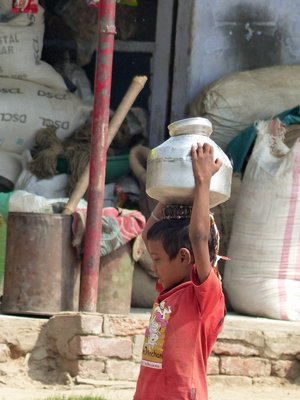 Encounters on the road

Leaving Fatehpur Sikri (see previous entry) behind us we headed west to Jaipur, driven by the ever-reliable Mehar and stopping en route to see the Chand Baori step well in Abhaneri and the nearby Hindu temple.

Abhaneri: “Well” worth the detour

Abhaneri is a small rural Rajasthani village that lies just north of the main road that leads west to Jaipur, famous for its ancient step well and an interesting Hindu temple. The village dates back to the 9th century A.D. and was originally called “Abha Nagri” – the “City of Brightness”. Legend has it that Goddess Harshat Mata, to whom the temple is dedicated, in a joyous mood spread brightness all over the village. The name has since been corrupted to Abhaneri.

Our main purpose in stopping here was to see the ancient step well, which is considered is one of the oldest, largest and most impressive of these huge tanks which dot the Indian desert landscape.

However, I actually found the temple the more interesting of the two sights there, especially as the worshippers there welcomed us and allowed us to take photos. 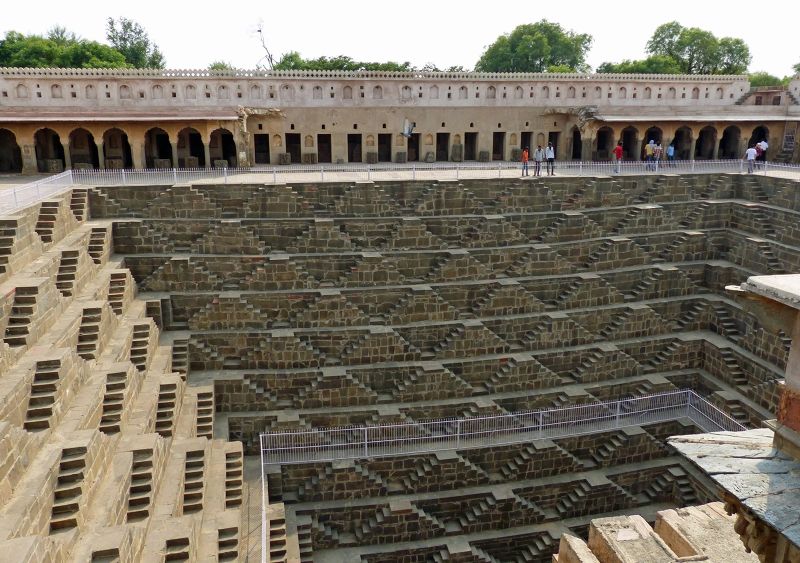 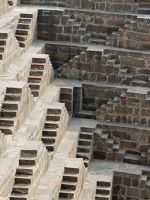 The traditional solution in this part of India to the challenge of the scarcity of water was to construct these impressive step wells. These were huge tanks designed to harvest and store what rain water there was. Chand Baori is one of the oldest, largest and most impressive of these. It takes its name from the local ruler who built it at some time between 800 and 900 A.D., King Chanda of the Nikhumba Dynasty.

The well is 20 metres deep and with 13 levels. On three sides flights of steps lead down these levels to the water at the base. The air here is five or six degrees cooler than at the surface, so as well as providing the local people with water Chand Baori also served as a community gathering place during the intense heat of summer. On the fourth side, the north, is a multi-storied corridor and two projecting balconies with shrines to Hindu gods, including Ganesh. 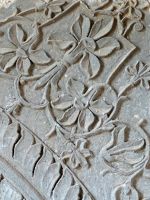 We also spotted a small shrine in one of the small buildings on this side at the top, used by guides and the security guard. These buildings are later additions, although I haven’t been able to find out their exact date. The main structure of the well has been restored, hence its fairly solid and new appearance.

Despite its large scale construction and functional purpose, the stone is beautifully carved in places, and the geometric patterns made by the steps rather pleasing – indeed, it reminded me rather of a painting by Escher.

There is no admission fee as such but if you accept the services of one of the guides who will hurry over to greet you then of course you should tip, and in any case the guy looking after the site, who will ask you to write in the visitors' book, will expect some rupees for his trouble. We tipped him, and wrote a few words, but passed on the guide as Mehar had already given us an outline of the well's history. Also, as we had already spent quite a long while at Fatehpur Sikri and still had nearly 100 miles to drive to Jaipur, we didn’t want to take the time needed to go down to the bottom. OK, I have to admit too that the thought of climbing up again in 38 degree heat didn’t much appeal to me either! 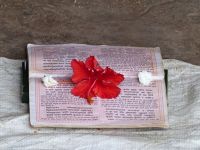 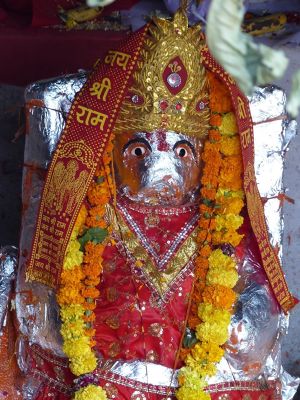 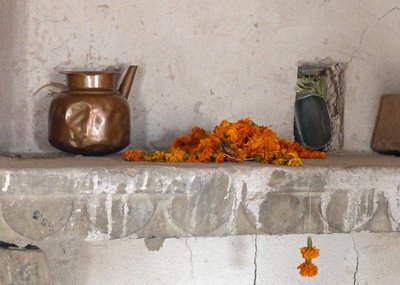 The small shrine at the step well

The Hashat Mata Temple was built by the same King Chanda responsible for the step well. It is no coincidence that they lie side by side, as the faithful could go to the step well to wash before coming to pray here. The temple was however destroyed in the late 10th century by Mahmud Ghazni, founder of the Ghaznavid Empire and the first ruler in history to assume the title of "Sultan”, who invaded this region around that time. Despite this destruction many of the temple’s carvings remain, though some are damaged or lie scattered on the ground around the platform on which it stands. The temple is, I gather, slowly being restored which explains why some carvings have now been reinstated and also why I spotted white painted numbers next to some of them, presumably to aid the restoration team in placing them correctly. 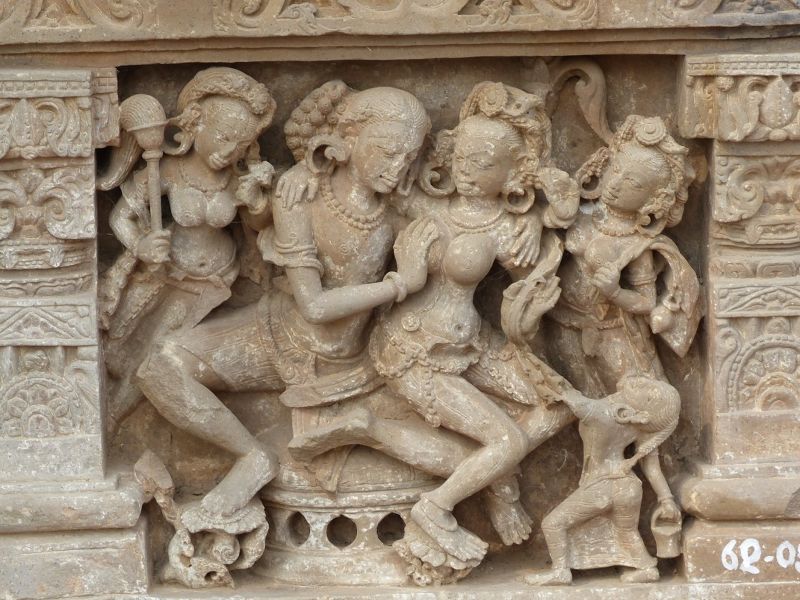 The temple is named for the goddess Harshat Mata, who seems to be something of a patron saint for the village. She is considered to be the goddess of joy and happiness, always cheerful, and she imparts her joy and happiness to the whole village – hence the name “City of Brightness”. 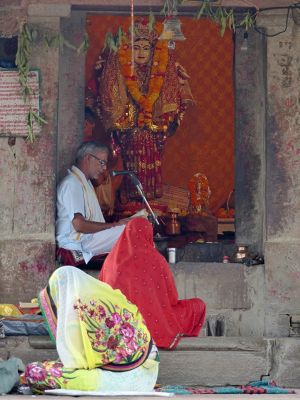 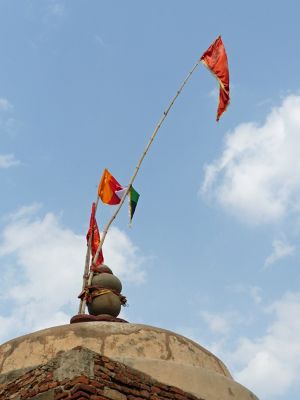 Although some locals were worshipping here at the time of our visit, they welcomed us with a smile when we climbed the steps and didn't mind us watching from a respectful distance nor taking photos. I also shot a piece of short video, mainly to capture the chanting.

The carvings in particular are beautiful and repay close inspection, and the atmosphere with the chanting and smell of incense on the air added to the experience of our visit. I was very pleased we had wandered over from the step well to check this out. 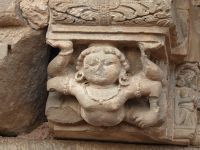 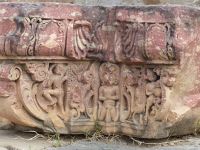 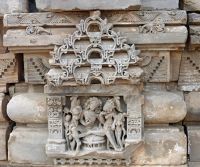 Returning to the car after our explorations, and glad of its effective air conditioning, we set off westwards. Altogether it was a long drive of about six hours from Agra to Jaipur, but even apart from the sights at Fatehpur Sikri and Abhaneri, it was an interesting one. This is after all India where life is lived by the roadside and is colourful, frenetic and intriguing. 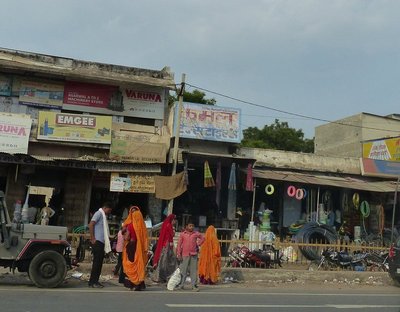 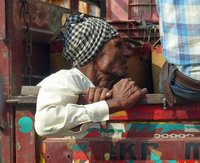 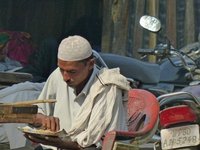 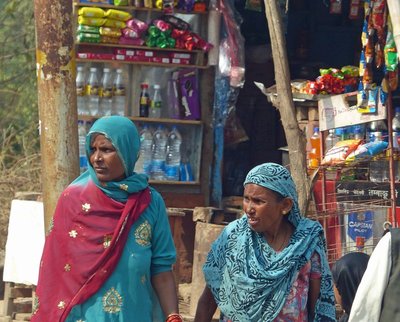 On the road to Jaipur

Among the things that caught our eyes were a herd of camels waiting patiently to cross the busy road, bullocks dozing in the shade, a holy man walking his holy cow, beautifully decorated trucks, school children coming out of school, stalls selling all sorts of goods and people queuing to buy. And a continuous stream of vehicles all driven as if only they had any real right to be on the road and only they had a destination so important that they must go first in every situation! 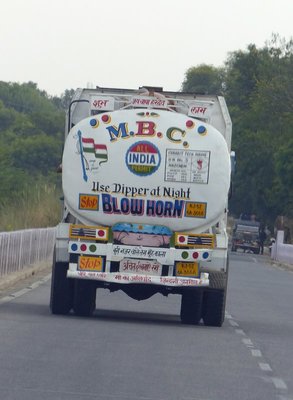 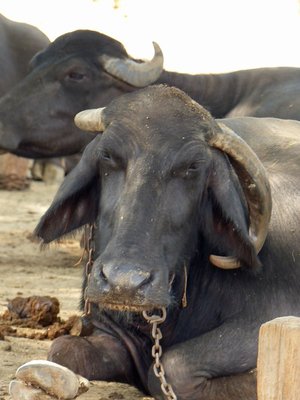 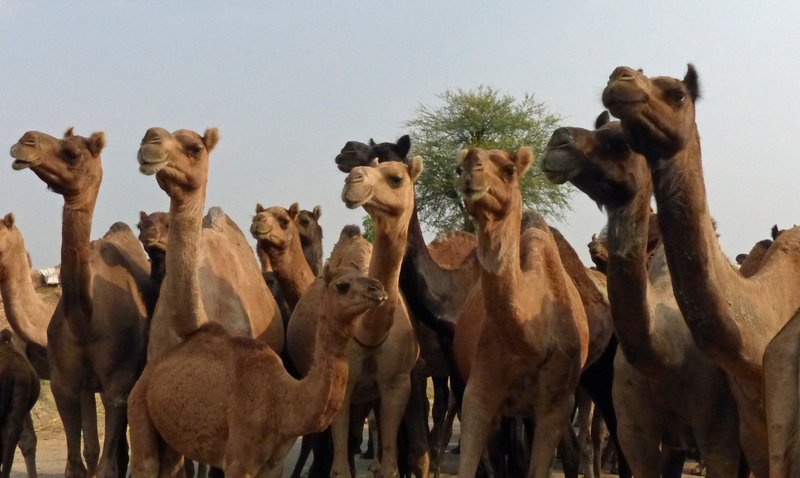 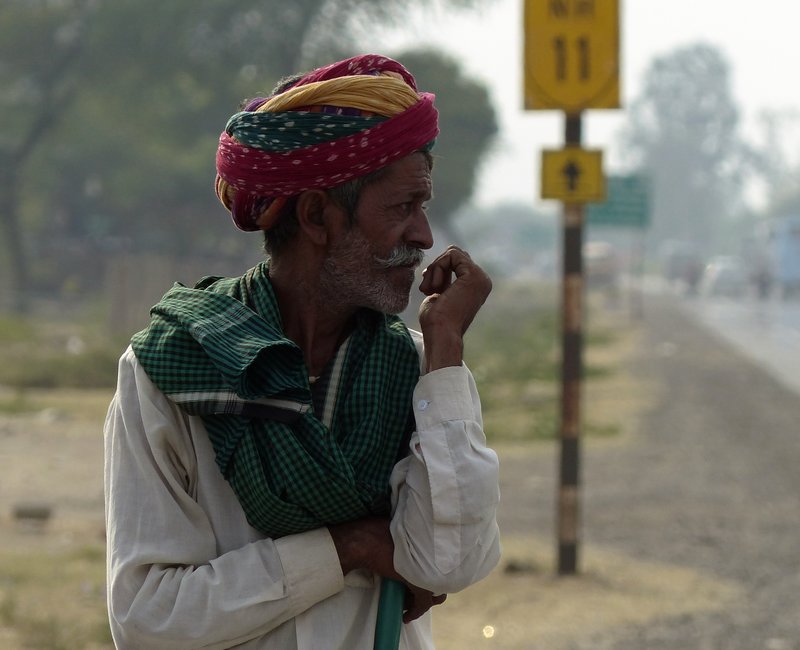 I found this and all our road journeys through Rajasthan fascinating, but I was to hear a story that evening that showed that not everyone agreed with me. A woman staying at our hotel described how she had met another lady a couple of days earlier in Agra, who had just arrived by car from Delhi. So horrified was she at this experience that she had declared that she was never travelling on an Indian road again and demanded that her tour company arrange rail tickets for the rest of her stay as an alternative. It wasn’t known whether the company had agreed to her request or not, but if so I reckon she missed out on a lot. While I enjoyed our train journeys in India, as giving a different view of the passing landscape, travelling by road has the big advantage that you can stop when you see something of interest (as we did when we saw this camel herd). And I even came to enjoy the manic driving and to trust that maybe most of the drivers did, as Mehar claimed, know not only what they were doing but also, importantly, what others were doing too.

We arrived in Jaipur in the late afternoon and checked into the hotel that was to be our base for the next two nights, Shahpura House. 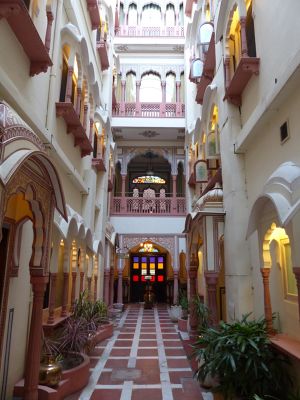 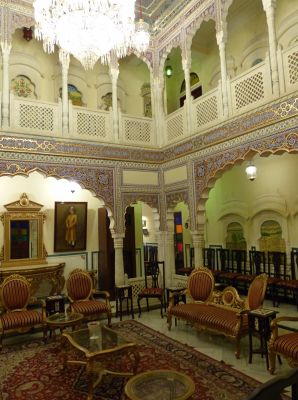 Shahpura House: hallway and one of the lounges

I had slightly mixed feelings about this small heritage hotel in a quiet Jaipur suburb. It has many great attributes. The public rooms are stunning, as you can see from my photos, exuding a great sense of history. The staff are charming and friendly, eager to please. There is a nice swimming pool, where I enjoyed a dip after a hot day's sightseeing, and a spa which I didn't use. One of its biggest charms is the lovely rooftop restaurant where we ate tasty curries on both evenings, with traditional Rajasthani music and dancing. 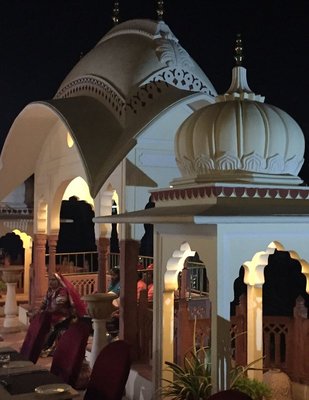 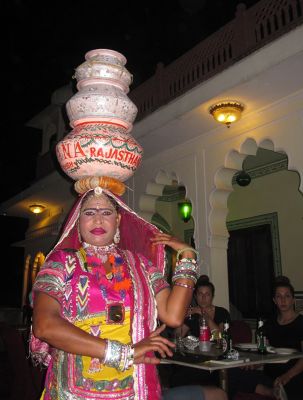 Evenings at the rooftop restaurant

However there was an air of amateurism about the place that became a little wearing after a while. Service was painfully slow, with two different bar men coming back three times to double check our drinks order and/or room number, for instance, and an afternoon sandwich ordered by the pool taking almost an hour to arrive. Wifi was free, but available only in the lobby and lounge, and even there frustratingly slow. 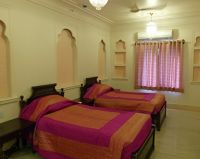 Our room was lovely – large, and simply but attractively furnished, with a seating area with wardrobe and mini bar, and sleeping area beyond (twin beds with pretty pink throws). The bathroom had a walk-in shower with rain shower head, and was provided with plenty of toiletries and thick towels. We had an in-room safe, air conditioning and fans, and state-of-the-art light controls. The beds were on the firm side, which I prefer and found comfortable, but the noisy A/C (or heat of the room if that was turned off) meant that I didn't sleep as well here as elsewhere. And even had we wanted to, sleeping in was not an option - the staff were going about their work by 6.00 AM and this is an echoey building. 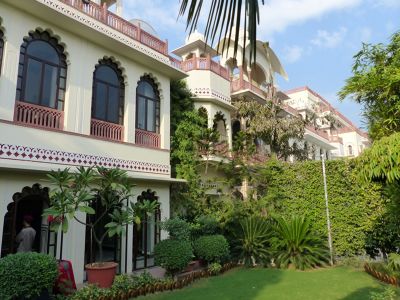 The main downside to our stay, apart from the aforementioned erratic service, was that our room was in a wing that was still being restored and it was a bit disconcerting to have to access the room via a staircase with an unfinished banister, and walk along a corridor with an unfinished floor and blocked off corners, to the background noise of hammering and sawing. Several times I had to step over tools left on the floor or over trailing cables. There was a lot of dust from the marble polishing which found its way into our room, making the floor permanently dusty. And although the room once reached was as I have said lovely, and clearly newly decorated, we couldn't help but conclude that they really shouldn't have opened the wing up for use before finishing the building work. The air of unfinished business extended into the room too. Some of the sockets didn't work and on the second day we had no hot water morning or evening. Worse, there was an exposed dangling electric cable in the bathroom right next to the shower, which looked decidedly unsafe, and although they did offer to tape it when we mentioned our concern they never did, and we just got used to avoiding it.

On the whole though I was glad we stayed here as it was a wonderful building to experience. But anyone else booking a room would be advised to check that it’s not in an unfinished wing, as further expansion seemed to be planned, and to go prepared to put up with haphazard, albeit charming, service.

Shahpura House was our home for the next couple of days as we explored Jaipur and nearby Amber Fort, to be described in my next couple of entries ...

Some lovely pictures here Sarah - I especially like the one of the herder. I wonder what he is thinking.

Yes Albert, that's one of my favourites too. Thanks for your visit :-)