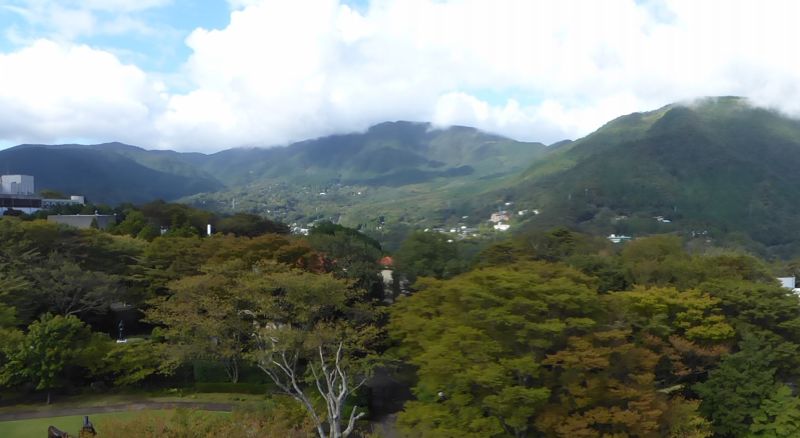 The best known landmark in Japan, and indeed one of its most iconic sights, is Mount Fuji. There is however no guarantee that you will see it, as the weather is unpredictable and the mountain often shrouded in cloud. We however were to be among the select band of lucky ones. But even had we not seen Fuji at all, our couple of days here would have been among the most pleasant of the whole trip, made more so by the friendly welcome we received at the Fuji-Hakone Guesthouse. We spent two nights in this small family-run guest house in Sengokuhara, and travelled the region by bus, funicular, cable car and even pirate ship!

Although I had enjoyed our time in Tokyo, it was in Hakone that I first started to really feel that I was getting closer to Japan. 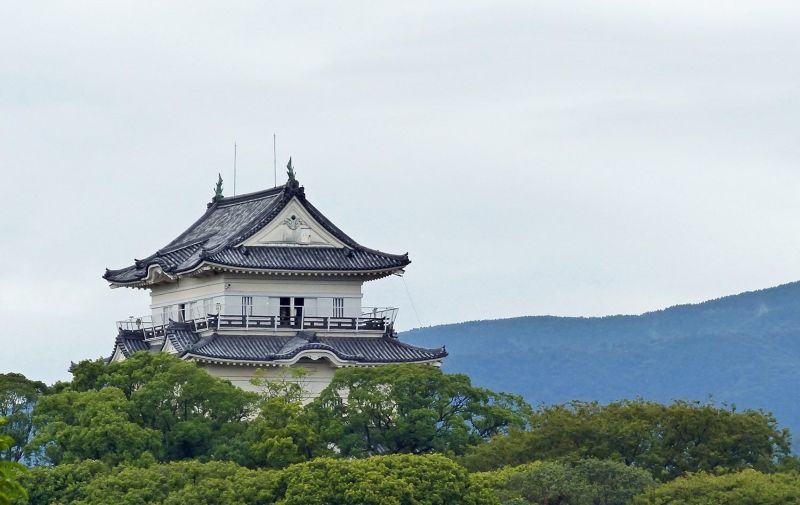 To get to Hakone from our hotel in Asakusa we first took the subway (Ginza line) to Ueno, then the JR train to Tokyo station. Here we boarded a bullet train to Odawara (about 30 minutes). From here we took the bus, using our Hakone Free Pass.

This is a great buy if you plan to spend any time at all travelling around the Hakone area. You can buy a pass for two or three days, and use it for free travel on all the varied forms of local transport – local trains, buses, the funicular railway, all the cable cars and even on the pirate ships on Lake Ashi. As a bonus, you also get discounts at some of the attractions. 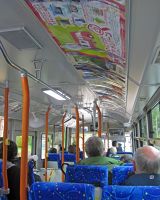 The ride to Sengokuhara took about 50 minutes, with lots of stops, climbing gradually. We followed a pretty river for part of the time, and later the road wound through woodland with glimpses of the surrounding mountains. The bus stopped only a couple of minutes’ walk from our guest house, Fuji-Hakone in Sengokuhara, so it was a very convenient way to travel here.

These though are local buses and not geared up for bulky luggage. We had taken Andrew’s advice to make use of the excellent luggage forwarding service offered by Japan Rail, so most of our stuff went directly from Tokyo to Osaka while we brought just enough for two nights on our journey to Hakone. I definitely advise doing the same as even our small overnight bags were an effort to squeeze in.

We stayed for two nights at the Fuji-Hakone Guesthouse, a friendly family-run ryokan in Sengokuhara. Rooms are Japanese style, with futons and tatami mats. Chris and I had a ground floor room, Fuji (all rooms are named after places in Japan). It opened directly from the pleasant communal sitting area. Walls are thin here, so even in your room you will have only a certain amount of privacy. I hadn't been sure how I would find sleeping on a futon but it was fine – comfortable and very cosy. There are no en suite facilities but you can book either the indoor or outdoor onsen for private use (30 mins at a time per room) – we used the outdoor one on both evenings and felt wonderfully relaxed each time after our soak under the stars. 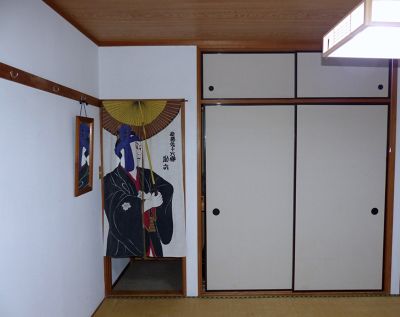 Corner of our room at the guesthouse

But for now we simply checked in, left our bags in our room, and hurried out again with Andrew and most of the rest of the group to return to the nearby bus stop and catch another bus to the Open Air Museum.

This was one of my highlights of our time in Hakone (although looking back I can’t think of much that we did here that wouldn’t fall into that category!) Not only does it have a fantastic collection of modern sculptures, including works by Henry Moore, Picasso, Antony Gormley, Rodin, Miro, Giocometti and others, it displays them in the most stunning setting. On arriving here we first had lunch in the Chinese restaurant near the entrance, which has fantastic views of the museum and the mountains beyond (the photo at the top of this page was taken from there), and then set off to explore the collection. 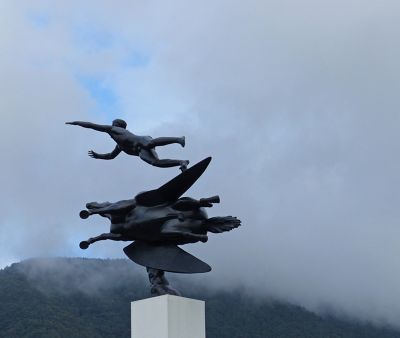 All the sculptures are beautifully displayed around the grounds, each one positioned in a spot carefully chosen to show it off to best advantage. As you wander the paths you find a new gem around each corner, and most you will see from several angles and all with these fantastic scenic backdrops. We strolled around happily, taking lots of photos, for a couple of hours.

Among my favourite works were: 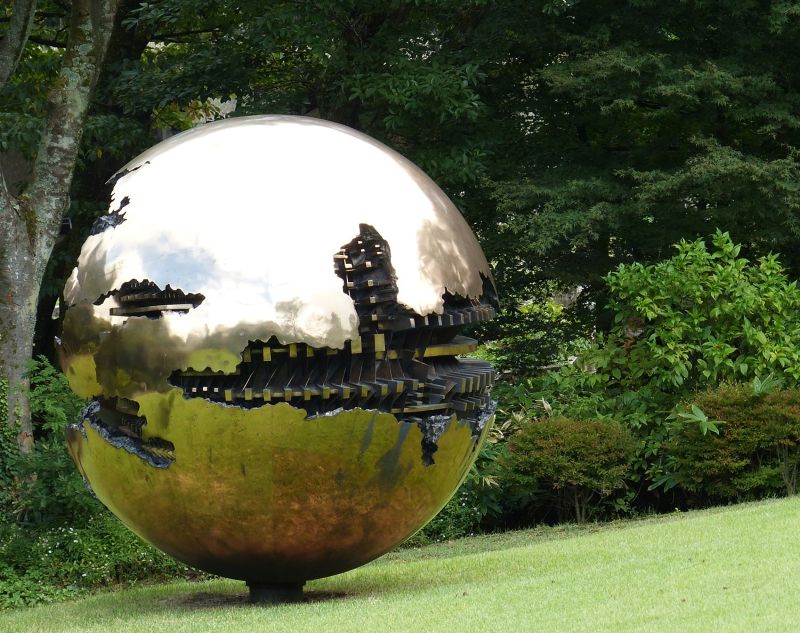 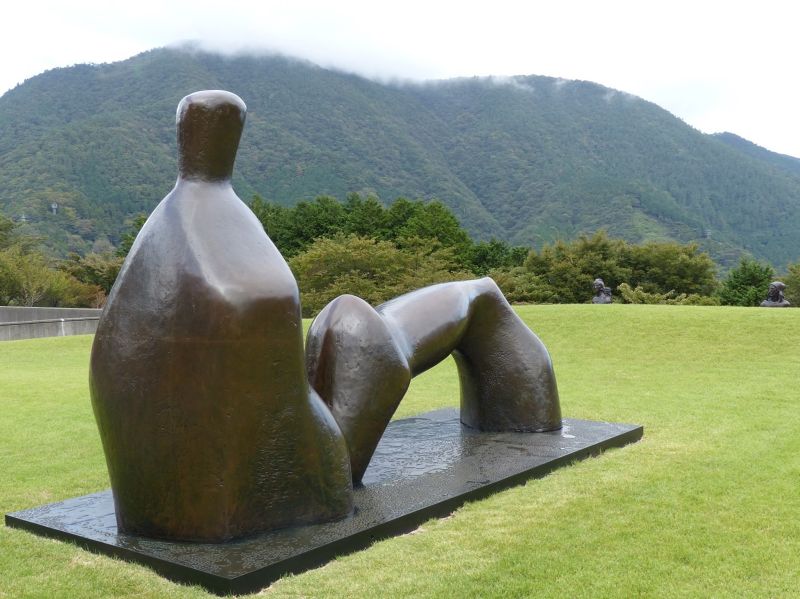 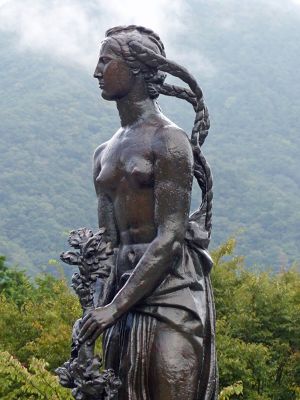 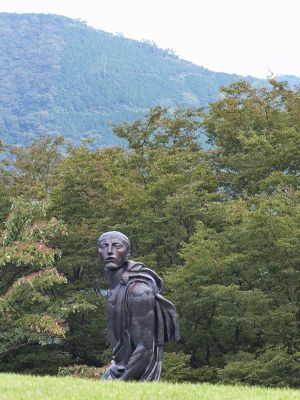 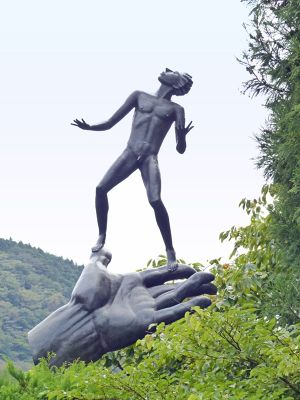 The Hand of God by Carl Milles, and his Man and Pegasus above 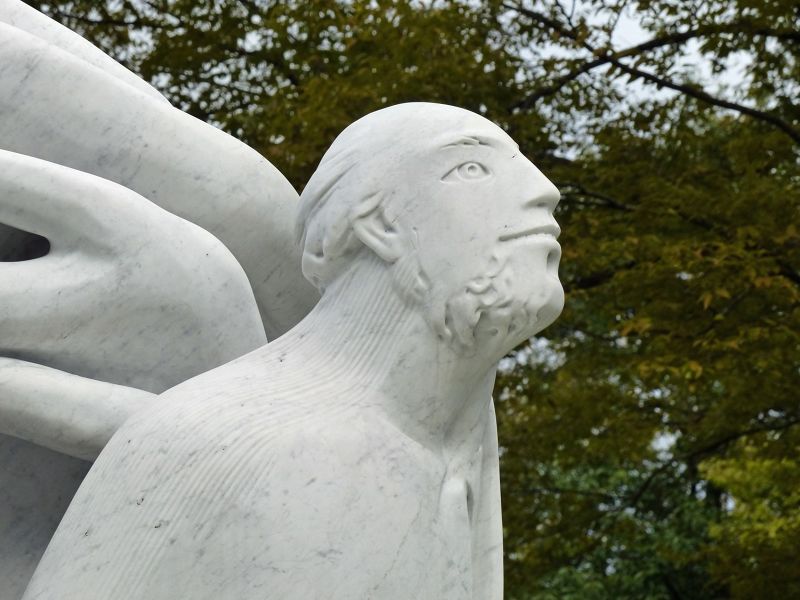 I also liked a kinetic sculpture by a Japanese artist, Takamichi Ito, called Sixteen Turning Sticks, which I videoed for a while.

One highlight was the Symphonic Sculpture, where we climbed the spiral steps for some more wonderful views, as well as admiring its wonderful stained glass interior. 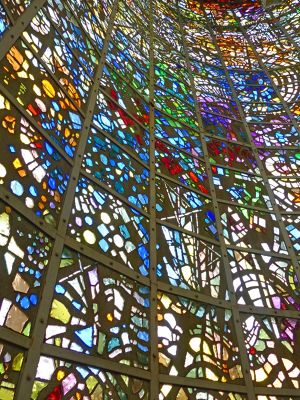 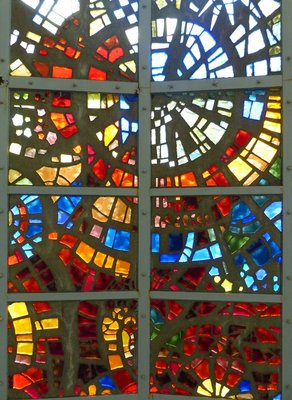 Another was the hot water spring foot-bath at the far end of the gardens, where we could slip off our shoes and sit relaxing with our feet in the warm water. While this is included in the admission fee, I did pay 100¥ to get a small towel to dry off my feet afterwards it made a great little souvenir of our visit. 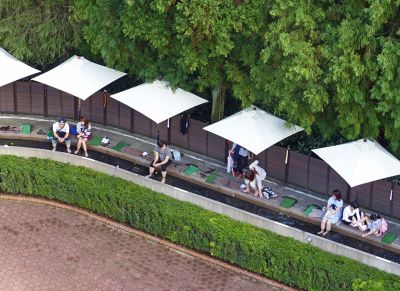 The foot spa seen from the Symphonic Sculpture

We didn’t bother to go inside the several indoor galleries, which have among other things an extensive collection of works by Picasso, as it seemed a shame not to spend all our time outside where we could enjoy the wonderful scenery as a backdrop to the art. But we did pop into the café near the hot spring for ice creams – my first taste of green tea ice cream (and last, as it turned out, as it proved not really to my taste).

After a really lovely afternoon here we caught the bus back to the guest-house to freshen up before dinner.

At the entrance to Daichi

On Andrew's recommendation we all headed to Daichi for our first dinner in the Hakone region. This is a family-run restaurant and that’s just what it feels like. The interior isn’t fancy (bare wood tables and seating, minimal decor) but it’s cosy and the service is friendly. 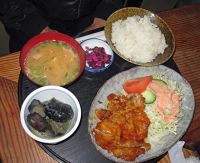 With 14 in our group we were asked to pre-order but that wasn't a problem as the guest-house had menus (in English, with photos) for us to consult. We all chose from the various set dinners. I had the ginger pork (the meat is thinly sliced and more like bacon) and Chris the teriyaki chicken. All our set dinners came with a bowl of chicken soup, a vegetable dish (egg-plant / aubergine), rice, pickles and salad. The portions were very generous and although the food was good I couldn't eat all of mine. Washed down with cold sake it made for an excellent if simple meal, and great value.

It was still quite early when we got off the bus back at the guest-house, and several off us decided to check out the shop opposite, which was still open – Lawson’s. This proved to be to be the ideal spot to pick up dessert and/or a drink to enjoy while relaxing in the lounge after dinner. They had some things we recognised from home (a good range of Hagen Dazs ice creams, for instance), and many that we did not. We bought some plum wine (very nice), an odd-looking half-hollow chocolate cake (less so) and a can of hot coffee from an impressive range on display.

There isn’t much to do in Sengokuhara after dark, but with snacks and drinks from Lawson’s and the cosy lounge at the Fuji-Hakone Guesthouse in which to enjoy them, no wonder the watchword for our group soon became ‘We love Lawson's!’ 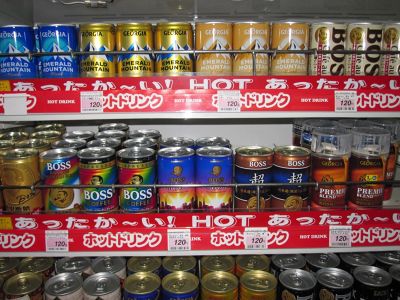 Hot coffee for sale in Lawson's

Later, Chris and I had our pre-booked 30 minute slot in the outdoor onsen, and found it wonderfully relaxing to soak under the stars. A lovely end to a super day. 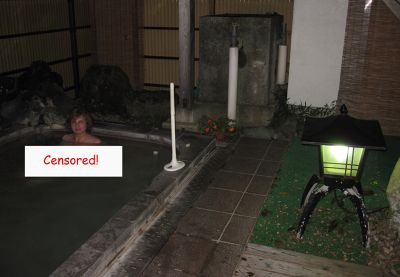 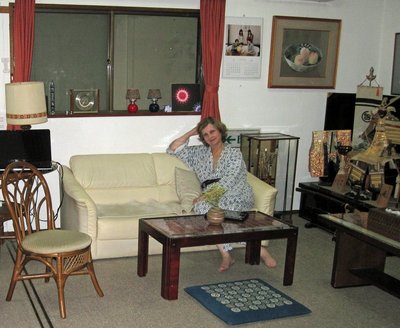 And in the cosy lounge

I've also been to that sculpture garden. Amazing, isn't it? We only had a fleeting view of Mount Fuji during our trip due to extremely cloudy weather. Lovely photos.

Hi Irene! Yes, I loved it there. We got a bit more than a fleeting glimpse, as you'll see in my next entry

Thanks Mike. I would never have thought of going to Japan for skiing!