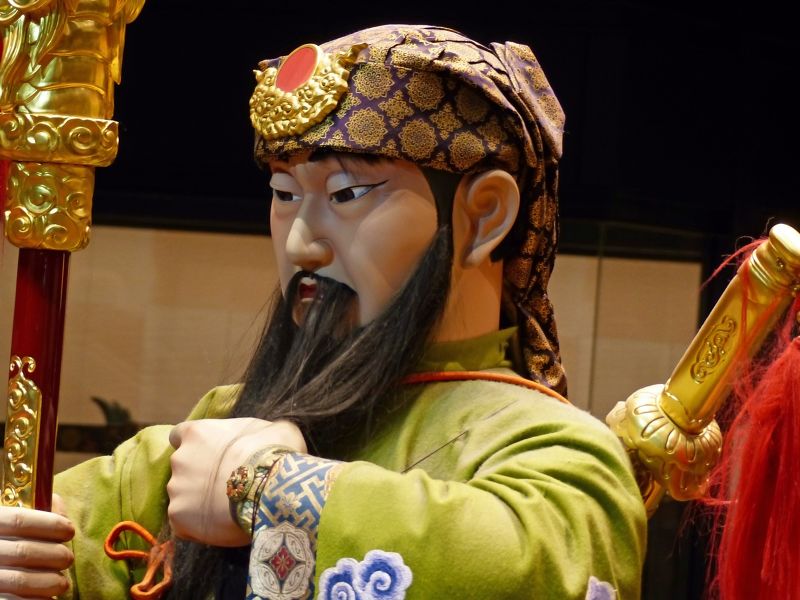 On a festival float at the Edo-Tokyo Museum

On our first full day in Tokyo we woke early, excited to get out and explore, although no doubt our jet lag would have been helped by sleeping a little longer. We ate breakfast in the hotel; it was served in the lobby area and consisted of a small but adequate buffet of mainly Japanese items (miso soup, rice) but also small pastries and slices of cake and decent coffee which we supplemented with juice from the inevitable vending machine.

Leaving the hotel we walked south to Kuramae station on the Toei Oedo line which would take us directly to Ryoguku subway station, just one minute walk from our destination.

This modern museum, which opened in 1993 in a rather striking building, is devoted to the history of Tokyo from the Edo Period which started at the end of the 16th century) to the post World War Two reconstruction and recovery. Displays include original artefacts, models and large-scale reconstructions. Despite suffering from considerable jet-lag that day (the worst I have experienced) I still found it absolutely fascinating – one of the best museums I have visited anywhere!

We bought our tickets on the 3rd floor concourse and took the striking red escalator up to the 6th floor where visits to the permanent exhibits begin. From our first arrival in the main exhibition area, with its replica of the Nihonbashi Bridge which you cross to reach the first Edo period displays, I could tell that I was in a museum that takes pride not only in its collections but in their presentation and curation. This early 19th century bridge was the gateway from Edo to such places as Kyoto (to the west) and Nikko (to the north). The original was 51 metres in length of and 8 metres wide. This replica is of the same width as the original but half its length. 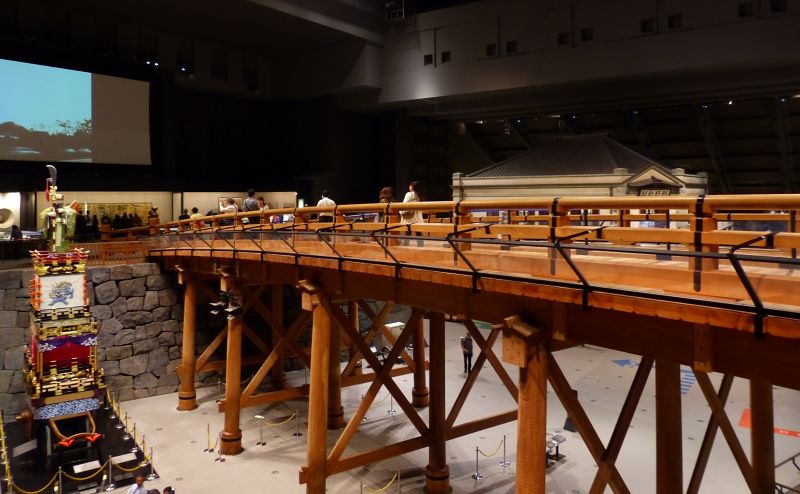 As we crossed the bridge we could see below us the replica Kabuki Theatre, or rather the entryway into the Nakamuraza Playhouse where Kabuki Theatre was often performed. On this occasion some museum staff were busy setting up some musical instruments here so we lingered on the bridge and eventually were able to hear the start of a lovely performance on the koto (a traditional Japanese instrument) and some kind of flute. I made a short video of the koto player while we watched, and later the music followed us as we started to explore the rest of the exhibits in the Edo zone. 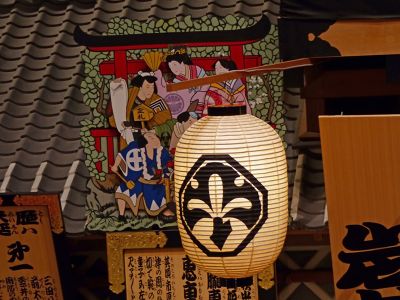 Part of the playhouse 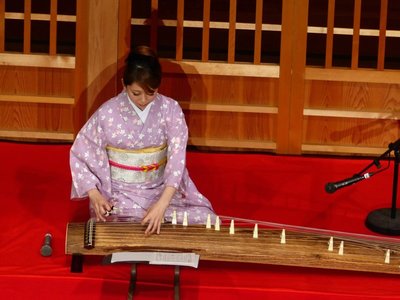 These included some very good models of Edo period buildings, both town houses and rich Samurai homes; a row of replica town houses from various periods; a fascinating display about wood-block printing (showing how each differently coloured layer of the image is built up one by one); and lots of artefacts from the time. 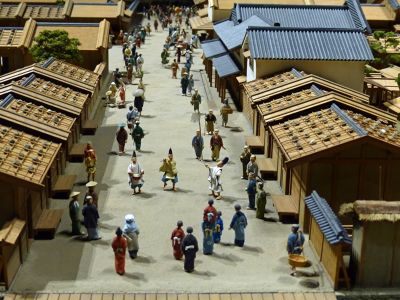 Model of a street in the Edo period, with town houses 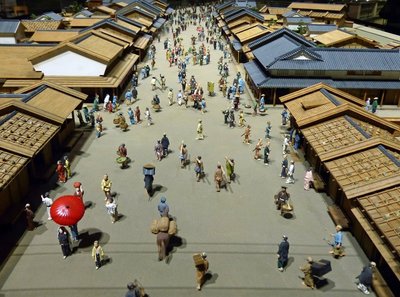 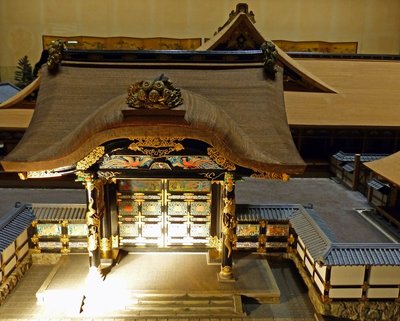 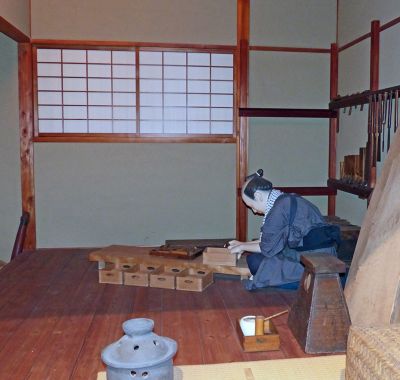 Replica of a print shop 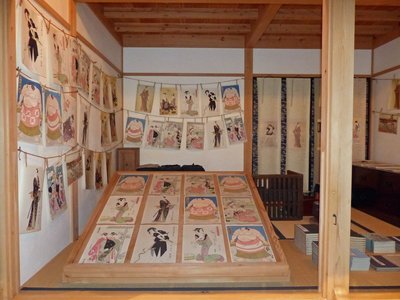 Replica of a print shop

The Tokyo zone which portrays the city’s more recent history is also very well done, although by the time we reached it jet-lag was kicking in and my body was screaming at me that it was now 2.00 am and I really should be in bed and asleep! Nevertheless, I was interested to see how European influences gradually crept into building design and shocked to see the devastation caused by the Tokyo fire bomb raids of World War Two. I was in this area when a guide was giving some American tourists a tour and I stopped to eavesdrop on what he was telling them – apparently more people died in these raids and in the fires they caused than in Hiroshima and Nagasaki as a result of the atom bombs – horrific. More positively, a small section near the end describes how Tokyo recovered and rebuilt, and how Japan as a whole embraced a technological revolution that led to its current strong position in the world economy.

Once we had seen as much as we could take in we went back to the ground floor and got coffee and a bite to eat in the coffee shop there – a coffee plus a cake 'set' for 650¥. I chose ice cream with rice dumplings and a sweet bean sauce, and Chris had pancakes with chestnut puree. This revived us and we were ready to tackle some more sightseeing.

I had wanted to go up the Sky Tree as soon as I read about it when researching our trip, and had planned to do so this afternoon, but the light rain that had been falling all morning was becoming more persistent and any chance of views from the top seemed remote. But we decided to head over in that direction in any case, optimistic that the clouds might lift. We were becoming more familiar with the subway system so the short but slightly more complex (two changes) journey to Oshiage station was easily accomplished, but we emerged from the station to find that the top of the tower so lost in the clouds that visibility would have been close to zero. 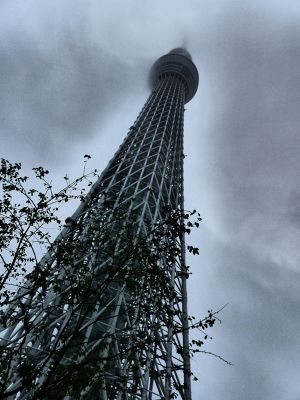 So we had to content ourselves with snatching glimpses from below, and with exploring the bustling modern shopping centre that sits at its foot, Sky Tree Town or in Japanese, Solamachi. This apparently has over 300 shops and restaurants, and I can believe that! On this Saturday afternoon it was packed with locals, mostly young, and was a fascinating place to watch young Tokyo at play.

We didn’t shop but we did enjoy seeing the range of goods available and the different displays. We were struck by how cutesy much of the clothing and the accessories were – we’re used to seeing Hello Kitty at home, but she looks positively sophisticated next to some other Japanese trends! There are also a lot of food shops and we were offered some free samples as we browsed.

We stopped off for refreshments at the appealingly-named 100% Chocolate cafė, where I had an excellent iced mocha and Chris a regular coffee and small chocolate cake. The cafė also sells tablets of its own chocolate in a wide range of flavours (56 of them to be precise). I was tempted - but buying chocolate gifts so early in our trip seemed a bit impractical (they would never have made it home!)

Soon after this it was time to head back to the hotel; our Essential Honshu tour was to start officially that evening and we were meeting up with our tour leader and travelling companions for a briefing and to go out for dinner.

The group briefing took place in the lobby of our hotel, where we had eaten breakfast. By now my jet-lag had subsided and I was able to enjoy meeting everyone and hearing a bit more about the plans for the next couple of weeks from Andrew, our tour leader. There were also some practical details to attend to – he needed copies of our insurance documents and also took our passports as he had offered to go to collect our JR Passes the next afternoon, leaving us more time for sightseeing.

Andrew was to prove an excellent tour leader. An American, he had lived and worked in Japan for quite a few years – initially in a Japanese company and more recently for Inside Japan. This gave him great insights into the culture while ensuring that he understood what we would find most puzzling and/or intriguing. He was also good company and very flexible – happy to lead people around but not at all bothered if anyone preferred to go off and do their own thing, and full of helpful advice to assist us in planning our individual explorations.

After this initial meeting he invited us to join him for dinner, and nine out of our group of thirteen accepted. While this meal wasn’t included in the tour price, it seemed to us a good idea to benefit from his local knowledge and also use the time to get to know our travelling companions a little better, so we were among that nine.

Andrew proposed one of his local favourite spots for dinner, one of the Watami chain of izakaya (Japanese-style pubs) on Kaminarimon Dori, about ten minutes’ walk from the hotel. On arrival we all removed our shoes and put them into the lockers provided. We had a large group table on the third floor with semi-traditional sunken seating (much easier for Westerners than sitting on the floor!)

Andrew suggested a selection of dishes and as we were all still pretty new to Japanese food we were happy to go with his ideas. A good decision, as everything he picked was very tasty, including spicy udon noodles, delicious pork dumplings with hot sauce to dip them in, and chicken minced and formed around cheese on skewers. Most of us had dessert - I chose the ‘citrus sherbet’ (sort of like a lemon sorbet) and Chris had a really good chocolate fondant. We both drank draft beer (Santory) which was very good too. The whole meal, with the drinks, was excellent value, and we had a great evening out with our new friends. 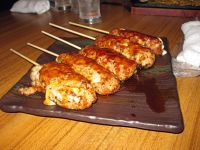 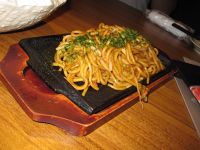 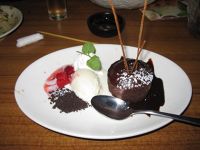 Our tour had officially begun and the next day we would explore more of Tokyo together ...

I loved your koto video. That is beautiful.

Yes, the music was lovely Sally - but wait a few days and I will post the video I made of another koto player in Hakone which was not quite so beautiful!

Correction spelling, should be "hear"

I definitely can recommend Japan Mike - hope you make it there one day!

I am looking forward to returning to Japan .. approx three months and counting

And I am looking forward to reading about your trip Albert