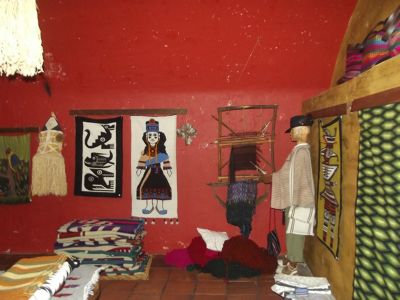 On our last full day in Ecuador we had made plans to meet up again with Betty and Marcello, the parents of a London friend whose company we had enjoyed earlier in the trip. They texted in the morning to say they had a small bit of business to attend to first, so we decided to use the time to pay a visit to our favourite café, Tianguez in the Plaza San Francisco.

After coffee we went into the attached shop to hunt for souvenirs, which occupies several of the arched spaces beneath the San Francisco monastery. It sells a wide range of high-quality crafts from all over Ecuador. Prices are not low, but everything is guaranteed fair-trade so you can be confident that the people who made the objects are getting a reasonable reward for their work.

And the selection is excellent – so-called Panama hats to Amazonian blow-pipes, Pre-Colombian ceramics, tapestries and Tigua paintings. We had already bought all the souvenirs we wanted (and more!) as we travelled around, but I still wanted to find good quality coffee and chocolate as gifts for my family, and I knew I would find it here. And I wasn’t disappointed! There was a lot to choose from too, and I didn’t want to keep Betty and Marcello waiting, so I had to decide quite quickly. In the end, I purchased a selection of different chocolate bars, including one flavoured with rose petals and another with crystallised orange; some small boxes of chocolate covered fruits (such as pineapple) and coffee beans, and a jar of jam made by women in a local cooperative. I spent almost $50 here – a lot of money but I bought a lot of things

Then we headed back to the hotel to meet up with our friends. Their suggestion for our first visit of the morning was to another good Quito viewpoint. 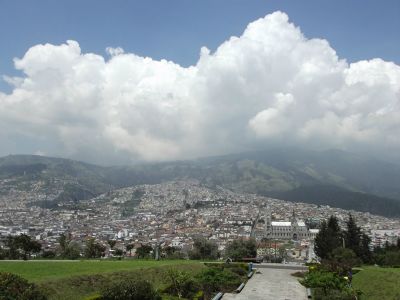 View of the city from Parque Itchimbia

Parque Itchimbia is one of several city parks in Quito, all of which seemed to me to be well-maintained and well-loved by locals. It is located on the hill of the same name and has quite recently (2004) been renovated, with new facilities added. These include the cultural centre in my main photo, which was reconstructed from the old glass and steel structure of the Santa Clara Market which lay on the other side of the city and had been imported from Hamburg during the government of Eloy Alfaro in 1889. The building now hosts exhibitions and trade shows – when we were there a modern furniture show was being dismantled, so we couldn’t go inside unfortunately. 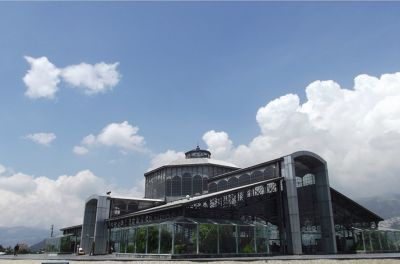 Cultural centre in the park

But we had come here mainly to check out the views, which were great, and as it was morning the sky was still blue and the weather warm and sunny. In particular, we had a super view of the Basilica del Voto Nacional, which stands opposite and just below the park, and of the mountains and volcanoes of the range to the west of the city, including Pichincha. 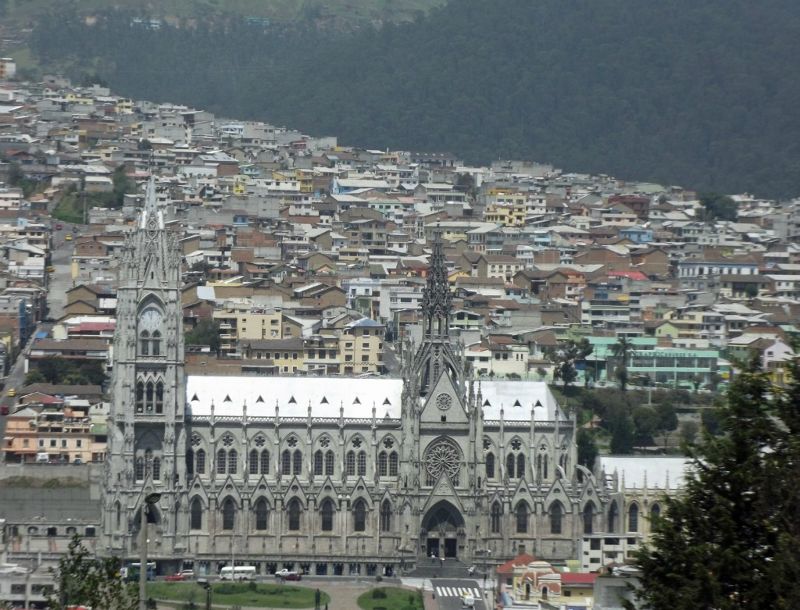 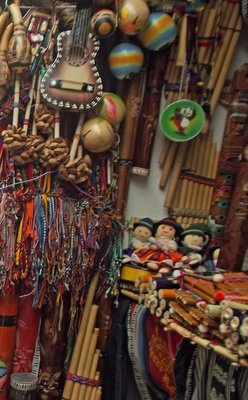 After spending some time in the park Betty proposed a visit to this large covered market. It reminded me a little of a Middle Eastern souk, with its narrow passages threaded between stalls piled high with colourful crafts etc. I was surprised to see quite a lot of locals shopping here, as the goods seemed to be mainly aimed at the tourist market – textiles (scarves, table coverings, hats and other clothing); pictures (some reasonably good Guayasamin reproductions, Tigua paintings and other rather tackier souvenirs); ornaments of various kinds; leather-work and speciality food-stuffs such as coffee and chocolate.

We had already done most of our souvenir shopping by this stage (or so we thought!) so we didn’t buy a lot, but we did enjoy wandering around and taking in all the activity. The one thing that we did buy was some ground coffee ($6.50 for a large bag) as that was one typically Ecuadorean souvenir that we hadn’t yet bought for ourselves – and very good it was too! Betty bought a small traditional mask for Marcello to take as a gift to friends in Venezuela whom he was to visit the next week and also bought us a bar of passion-fruit flavoured chocolate – delicious! 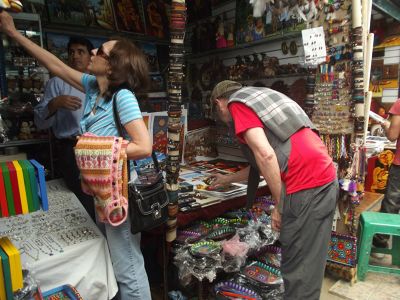 Betty and Marcello choosing their mask 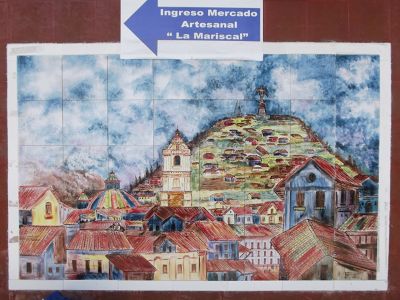 Mural near the market

As we had enjoyed the market Betty suggested that they show us one of their favourite shops for traditional crafts. We weren’t particularly planning to shop, having already bought a lot on this trip (by our standards – we’re not usually big shoppers on holiday), but we agreed to check it out as it sounded interesting. And it was – interesting, lovely and rather expensive, at least when compared with the markets! 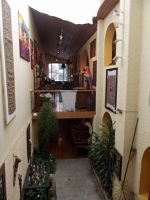 In the Galeria Latina

This shop specialises in crafts from all over Latin America, not just Ecuador, and they seem only to have the best of everything. Nothing here was tacky, nothing badly made or uninteresting. There were musical instruments, textiles, beautiful silver jewellery, wall-hangings, paintings, wood-carvings, tagua nut carvings and even some very good antiques.

As I have said, we had no plans to shop so just browsed around while Betty picked out a pair of silver earrings as a gift for her daughter in London, which we were to deliver on her behalf. But my eye was caught by a table full of very attractive wooden coasters, all different and in a range of colours. We asked about them and were told they were from Peru – so not much good as a souvenir of Ecuador then! We walked away ... and then returned. They really would go in our room, and we really did need new coasters

So we decided to buy a set. They were being sold on the basis that you could pick out any six that you wanted for the price of $35, so we went through and selected some that would best match our décor while also appealing to us – see what you think of our choices in my photo.

After shopping it was time for lunch. On our previous day out we had treated them; this time they wanted to return the favour and brought us to this smart-looking restaurant on a busy street in modern Quito, Avenida 12 de Octubre. In appearance it is the antithesis of cosy Mama Clorinda where we had eaten with them previously, being a large open dining room with a bustling atmosphere and some beautiful traditional art and decorative touches. But like Mama Clorinda it focuses on Ecuadorean cooking and is very well-established in the city, having been run by three generations of the same family for forty years. 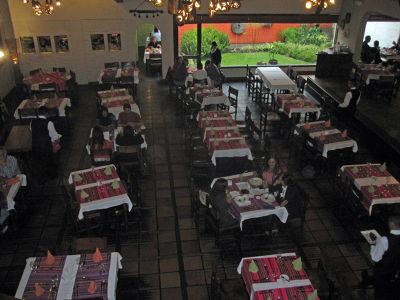 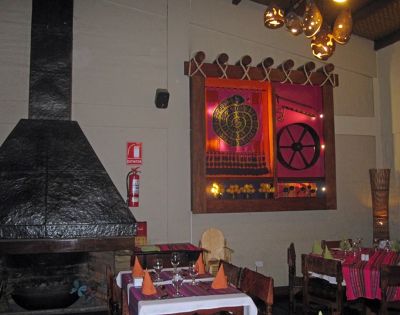 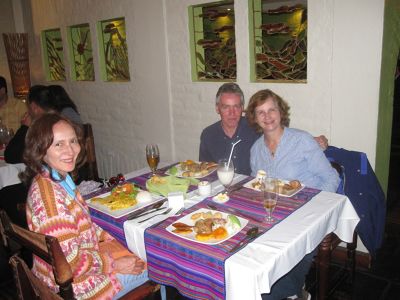 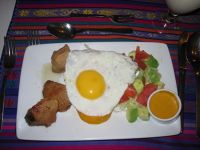 I opted for the llapingachos con fritada – my favourite potato patties here served with fried pork. I loved the patties as I had elsewhere, the egg was nicely fried, and the peanut sauce that came with the dish was good. But I found the pork a little dry and thought the meat had been over-cooked, not for the first time in Ecuador. Chris felt the same about the pork in his traditional platter, which he otherwise enjoyed, but Marcello had the same dish and enthused about the meat, so I am guessing that it must be local taste to serve it so dry, rather than poor cooking skills! Betty’s corvina (sea bass) in coconut sauce looked lovely, as she said it was, and I found myself wishing I’d ordered that

I drank a delicious guanabana juice (another of my favourite Ecuadorean tastes). As our hosts paid I don’t know what the final bill came to, but it struck me as quite expensive for Quito. Overall I enjoyed the meal, and loved the décor here, but I’m not sure it’s worth the higher prices when there’s so much good value food in the city.

We had sat for quite a while chatting over lunch, so afterwards we decided to head back to our hotel – we had packing to do and we also felt that our hosts had given up more than enough of their time. So Marcello drove back through the heavy Quito traffic and we said our farewells, promising to meet again when/if they came to visit their daughter in London (which so far unfortunately hasn’t happened).

Back to the Vista Hermosa

For our final dinner in the city we decided to go back to one of the restaurants we had enjoyed earlier in the trip, the Vista Hermosa, as we thought it would be nice to end the trip with another look at this great view. Unfortunately we weren’t quite so lucky and our table was one row back from the windows, but we could still enjoy the city lights from where we sat. We skipped the starters as we had eaten a large lunch, and again shared a pizza – this time the vegetarian one, which I preferred to the ham and mushroom one we’d had previously. Chris had two Club beers, I also had one, and after the meal had an excellent Brandy Alexander to round off our farewell dinner.