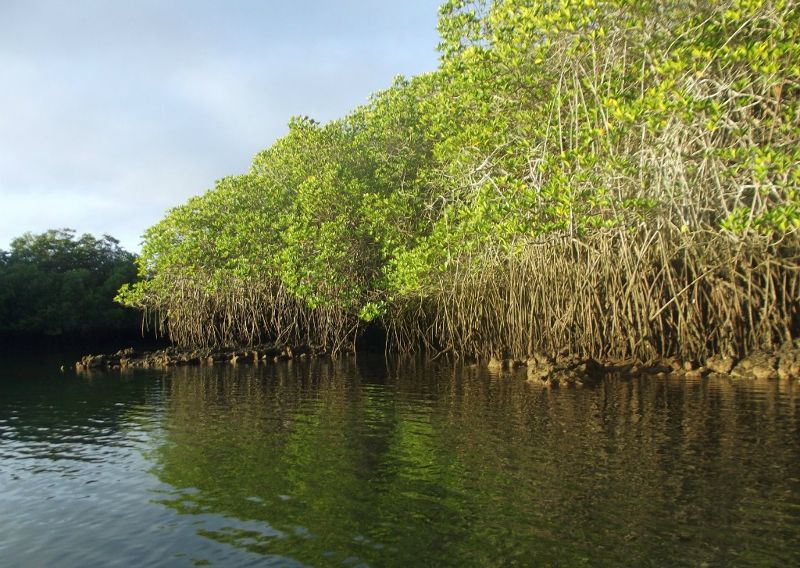 On the final day of our Galápagos cruise on the Angelito we were again moored off Santa Cruz, this time in the channel to the north of the island that separates it from Baltra where the airport is situated. With only a few more hours left, we were all up early for a pre-breakfast final visit – a panga ride in Black Turtle Cove. This is a beautiful inlet surrounded by mangrove trees (three species – red, white and black). No landings are allowed here, and boats have to turn off their engines. 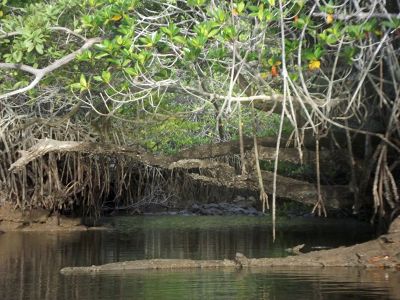 The early morning light was lovely as Fabian steered us to a great spot where a small lagoon emptied into the cove. He grabbed a mangrove branch hanging out over the water to steady the panga, and we waited. We were rewarded by the sight of a succession of fish and other wildlife exiting the lagoon – several white-tipped reef sharks, sea turtles and a couple of spotted eagle rays. It was so tranquil there, just drifting slightly and watching these various creatures pass right by, or even underneath, our panga. 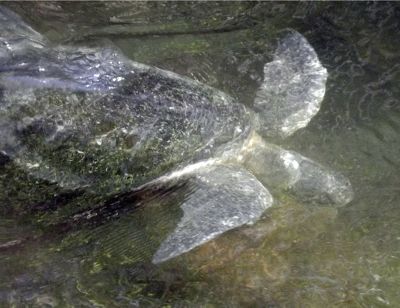 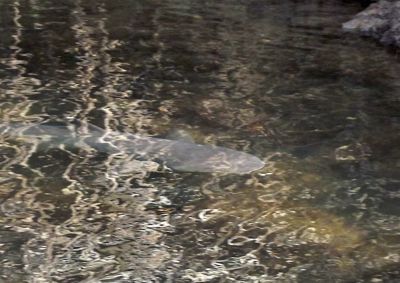 After a while though we had to leave, and headed back to the Angelito for breakfast. On the way we saw a number of birds – a lava heron, brown noddies, several pelicans and a blue-footed booby. 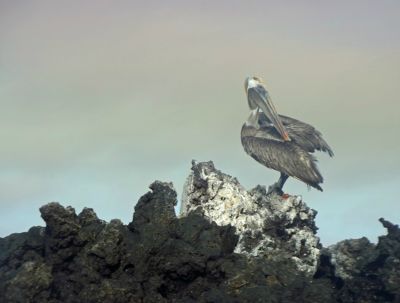 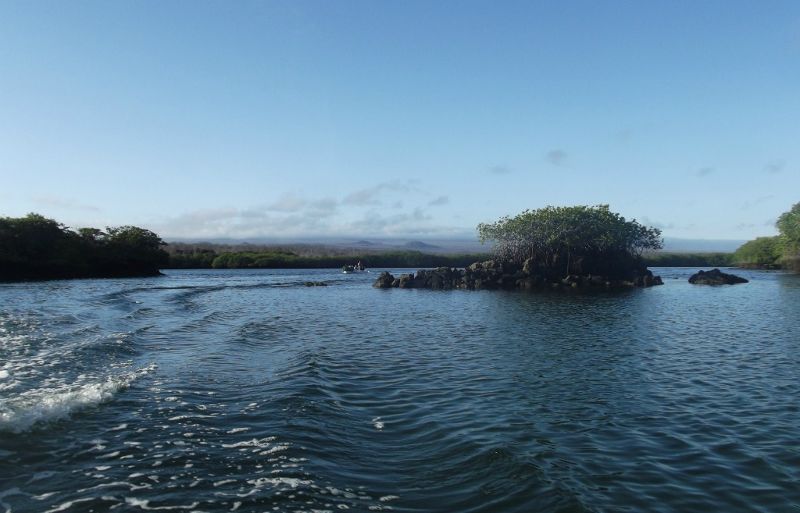 This is a rather different environment from any we had seen elsewhere in the archipelago and it was a special, peaceful spot in which to spend a short time, marking the end of a very enjoyable week aboard the Angelito. 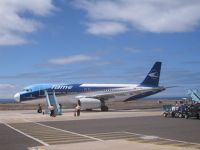 I think we were all sad to leave the Angelito and these wonderful islands. Before we came I had wondered if a seven day cruise would be too long, with the various island landings too similar to prevent boredom. Now I was leaving I felt that a two week one would not have been too much!

Our return to the airport mirrored our arrival – mooring in the small harbour of Baltra Island, transfer by panga to the jetty and by bus to the airport terminal. Although a small airport (it has been modernised since our visit) there were facilities there to help pass the time – a café and of course a shop, where I was pleased to see copies of the book that another member of our group had purchased in Puerto Ayora as I had hoped to be able to find it somewhere. And I also got my best photo of a finch, as the travellers' left-overs in the café ensured they stayed still long enough to be captured on camera! 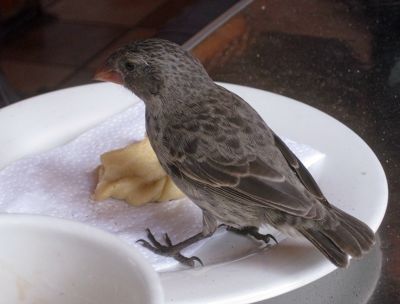 Ground finch (I think) at the airport

Back 'home' in Quito

Our flight was a direct one back to Quito, where we were met and transferred back to the same hotel we had stayed in at the start of our Ecuador adventures, the San Francisco de Quito. On this occasion we were given a room opening off the main courtyard, #14, which had a large double bed on a mezzanine floor accessed by a rather narrow spiral staircase. The floor below had a wardrobe and desk, but would have benefitted from the addition of some seating perhaps. The bathroom opened off this floor, so the staircase had to be tackled if getting up in the night – not a major issue for us but I reckon some people might prefer to avoid this and the other courtyard rooms for this reason. 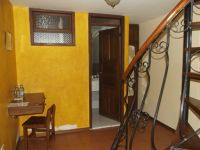 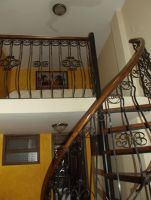 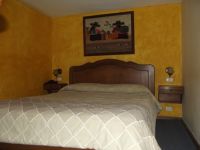 Our final room at the Hotel San Francisco de Quito 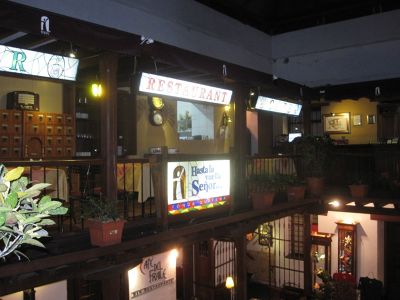 We retrieved the luggage we had stored there and freshened up, before heading out to dinner. It was slightly odd, after a week on board the Angelito, to be able to choose where to eat and to walk there through city streets. We opted for another of the restaurants in the Archbishop’s Palace (where we had enjoyed a good dinner on our first day in Quito at the Café del Fraile). This time we climbed to the second floor to try the unusually named Hasta la Vuelta Señor. This had been recommended by our local friend Marcello, and we were pleased when we arrived to see some familiar faces – Ryan and Mele, who had been on our Galápagos with us, were eating at the next table to ours with a local friend of their own. It was good to know that a place that looked pretty touristy was also a popular choice with Quito residents. 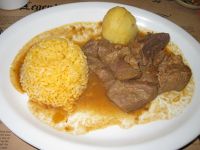 We ordered a plate of empanadas to start with. Made with yucca flour and a cheese filling, they were delicious. But I was disappointed with my main course. I had chosen the seco de chivo – goat stew, a traditional favourite which I had been wanting to try (although the menu said lamb – a concession to tourist tastes, perhaps?). 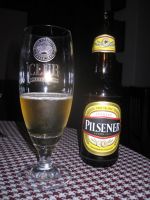 But the beers were good

However, the meat was rather dry and seemed over-cooked to me, and the boiled potato and rice that accompanied it weren’t great either. Chris had a sandwich “de la Ronda”, with turkey and cheese, and said it was OK but nothing special – all in all a disappointing meal compared to many we had eaten in Ecuador, and rather pricier than some too.

We said goodbye again to Ryan and Mele, promising to stay in touch on Facebook (which we have done, as well as with some others from our group) and walked back through the lovely streets of colonial Quito, happy now to be back in a city that we had both taken a real liking to. Not for the first time, we congratulated ourselves on having chosen to stay here in its historic centre, enjoying the atmosphere of these beautiful old buildings. 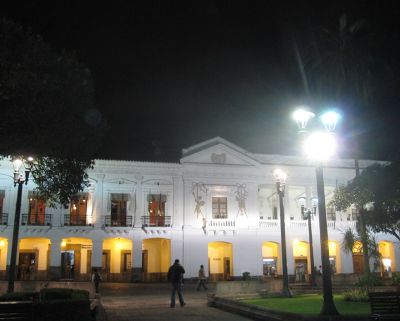 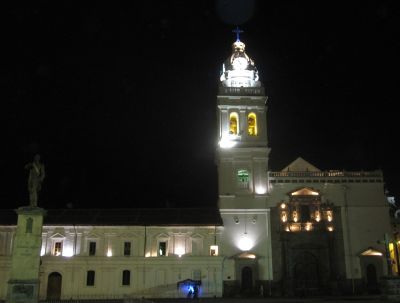 And tomorrow we would spend another day with Marcello and Betty, and were looking forward to seeing them again …

Quito looks really beautiful, though your hotel room seems a bit odd with nowhere to sit downstairs. Great photos. All the best, Irene

Nice and fitting way to end your cruise experience.
xx

Thank you both :-) Yes, Irene, this wasn't the best room we had in that hotel (nor the worse) but on this occasion we were only there one night so the lack of seating wasn't a major issue, and the excellent location made up for the few shortcomings in the rooms

You certainly chose well for your trip to the Galapagos but like you say elsewhere It would be hard to choose badly. Big issue is, is 7 days enough.

Some people do only four or five, and I reckon they still have a good experience. Seven days is probably enough for most people but I wouldn't have minded having longer. Perhaps the ideal is a one week cruise but als a few days based on land