The last of our Galápagos Island landings 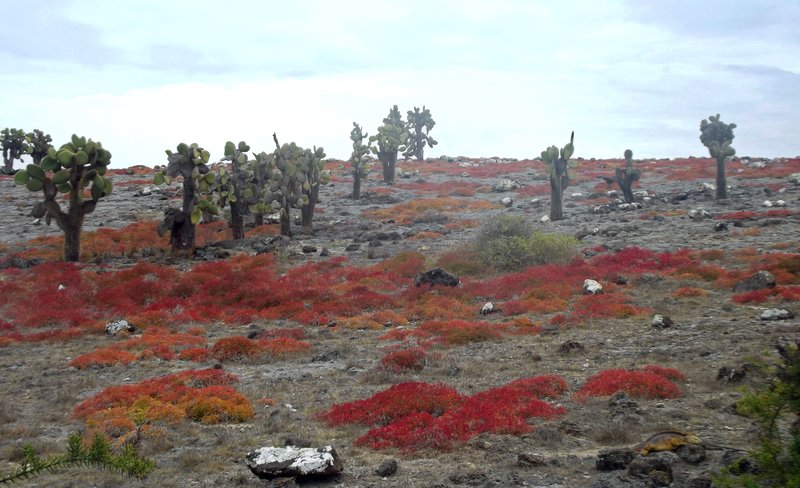 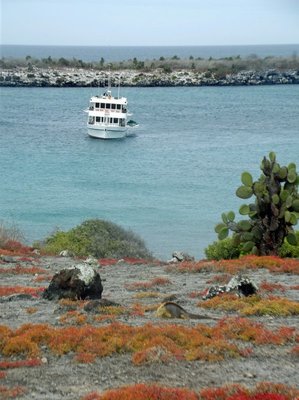 The two Plaza islands, North and South (aka Norte and Sur) lie just off the east coast of Santa Cruz. Both are uplifted islands, long and thin in shape, facing each other across a small bay.

We came to South Plaza on the last afternoon of our Galápagos cruise on the Angelito. It was the tenth island we visited, and before we landed I had thought that maybe I was “all island-ed out”, but yet again I was to be surprised by the variety of experiences the Enchanted Isles can offer.

We had arrived at the Plazas just before lunch, and the Angelito had moored between the two islands, of which only South Plaza can be visited (North Plaza being closed for scientific research). It is the larger of the two islands but only 0.13 km square, so a walk here gives you a sense of having seen a whole island rather than just a small part of one.

The panga took us across to the landing place as soon as we had eaten, and we made a dry landing on to a low stone jetty which led to a rocky shoreline. Here there was a stone obelisk indicating that this is part of the Galápagos National Park (as are all the islands and their visitor sites). There were several Galápagos sea lions on the rocks here, along with Sally lightfoot crabs and some swallow-tailed gulls. But we didn’t spend a lot of time here, and instead soon set off on the trail across the island.

This trail is a loop, 2.5 km in length and rated moderate, although I found it easier going than many others. It leads gently uphill from the landing place through a very striking landscape of rocky soil and brightly coloured vegetation. This is sesuvium or Galápagos carpet weed which is turned vivid shades of red by the arid conditions at the end of the dry season (like an ankle-high New England Fall). If you visit in the rainy season however, you will find it mostly green.

We encountered a number of male land iguanas here, of the same species of these that we had seen on our first island visit on North Seymour. Their bright yellow colouring really added to the impression I had of a landscape that was both dramatic and at the same time rather domestic, with the almost tame iguanas resting languidly under many of the opuntia trees. 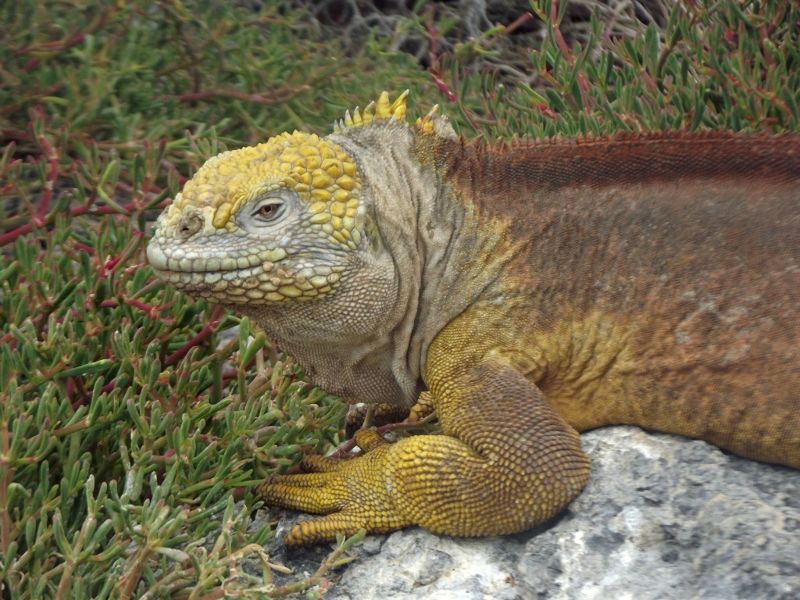 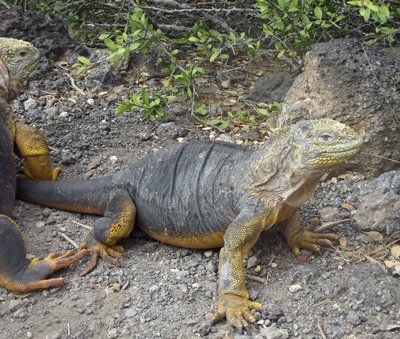 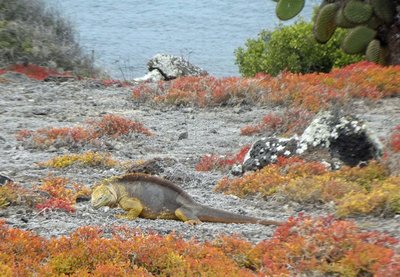 The least bad photo of
a yellow warbler
I took all week!

Other wildlife that we saw on the trail included a yellow warbler, ground and cactus finches, several Nazca boobies and (near the shore) marine iguanas.

We looked out for, but didn’t spot, one of the unique cross-bred iguanas known as hybrids that can sometimes be found here, with (usually) a marine iguana as father and land iguana as mother. These are always sterile, so have not led to the evolution of a totally new species. It isn’t known why this cross-breeding only happens here on South Plaza and not on the other islands where both iguana species are found.

The island is only 130 metres wide so we soon reached the southern edge and turned east towards the cliffs.

The trail climbs quite gently and on the far side of South Plaza emerges on top of a cliff, from where we had a wonderful view of the bird life of this island. Shearwaters were wheeling in the sky, heading straight for the cliffs and veering away each time just before touching them as if they had some sort of built-in radar. 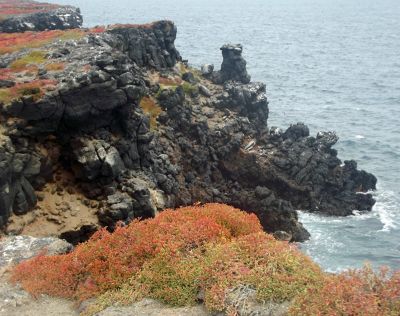 The cliffs of Plaza Sur

Frigatebirds were riding the thermals higher up, and a couple of pelicans dived for fish. But the most exciting for me, because it was my first really good look at one, were the red-billed tropicbirds that sailed past our vantage point from time to time. This is a beautiful sea bird, with its bright red bill and flowing tail. It is not endemic to the Galápagos Islands, being widespread across the tropical Atlantic, eastern Pacific and Indian Oceans, but that didn’t make seeing them so closely any less special. 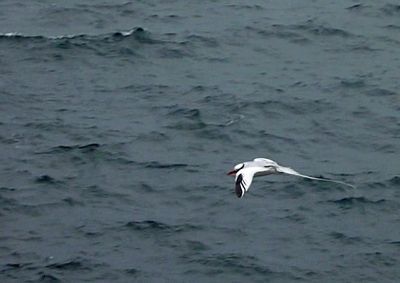 Further along the cliffs we came to a colony of young male Galápagos sea lions, known as bachelors, that is well-established here. I was amazed to learn that they are able to climb these rocky cliffs quite easily, and thus to find refuge from the bossy alpha bulls or “Beach Masters”. Here they can chill out with their mates and refresh themselves before perhaps trying to fight one of the alpha males for the right to rule a beach. 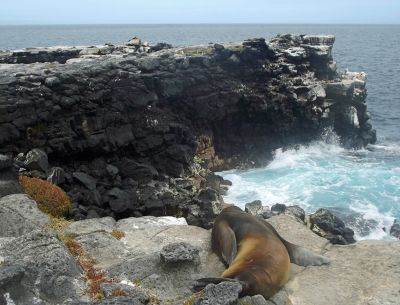 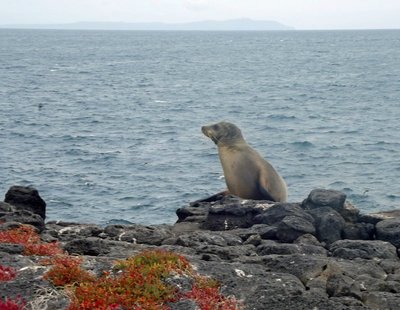 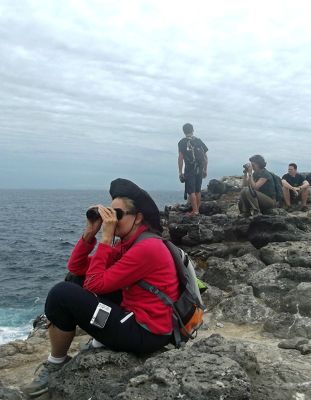 We rested here too for a while before following the loop trail back to our starting point, a little sad that our afternoon on the final island of our cruise was coming to an end.

That evening there was a party on board the Angelito to mark the end of our time together. Not for this little boat the formality of the big cruise ships on such occasions, but instead a really friendly gathering with a buffet dinner for which the chef and his assistant pulled out all the stops! The chef carved some amazing animals and flowers out of all sorts of vegetables, cooked a great buffet dinner with a wonderful fish as the centre-piece, and made a farewell cake. 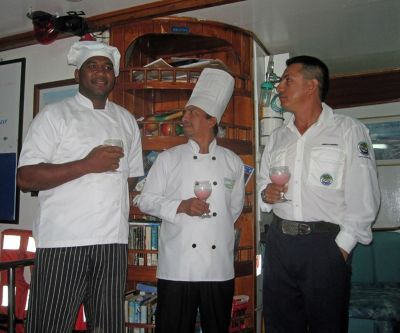 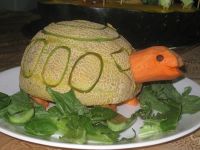 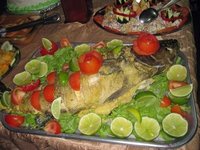 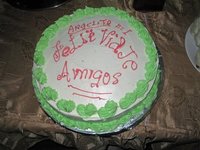 After the meal there was an impromptu concert on the rear deck, with some of our travelling companions providing the percussion and others treading the boards. More than a few beers were consumed, and we had a lovely evening to round off what had been an incredible week! 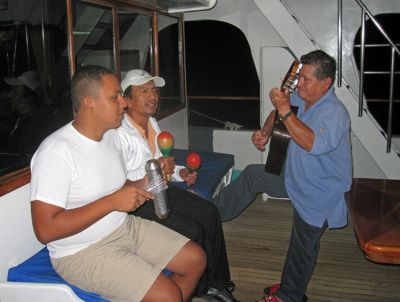 Music from the crew 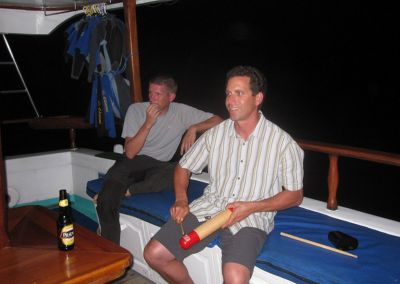 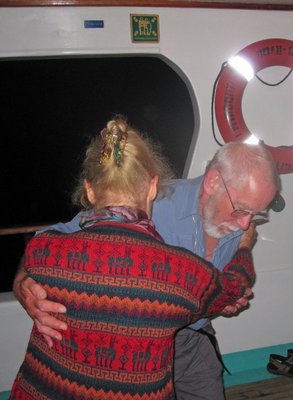 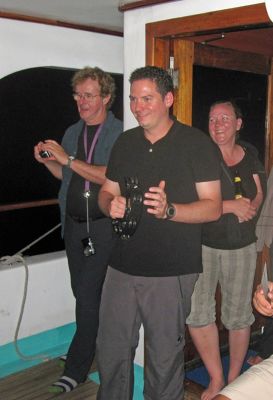 Sue dancing with Brian, while Geoff, Reto and Yolande look on

Tomorrow we would fly back to the mainland, although Fabian still had one more corner of the Galápagos to share with us …

What a fantastic blog Sarah! Your photos are superb! Love the big iguana one

And an awesome last night. Sounds like so much fun!!
Hugs xx

Thanks so much Ann :-) Yes, the last night was fun, though a little sad too. We were so lucky with this group of fellow travellers - everyone got on very well and there were no moaners or "why can't it be more like home?" types!! A nice mix of nationalities too - US, Australian, Swiss, Belgian, Israeli and UK

Stunning Iguana photo. Having been on a large cruise ship and a smaller one like the Angelito I much preferred the latter.

Me too - the smaller the boat the better as far as I am concerned ?